Pulling back on that curtain of darkness, Oscar emerges as a swirling fish storm in the middle of the Atlantic. We definitely have some weeks left yet to the Atlantic tropical season…

I think you’re one of the few who welcomes such weather!

Just like some upon the land who can not take their thrill,
by treading over long flat plain and thus climb up tall hill,
often you will find those soul that find themselves at sea,
and there they’re thrilled not by the still but waved topography.

Now, my ole Uncle Elmer Delmond Shulacker, back down in Rooster Fork, Tenn, was always thrilled by what came out of his still…often in waves.

Its doig some flooding… And Oscar the Grouch?

@Rookie said:
I think you’re one of the few who welcomes such weather!

Oscar is like Leslie, perfect for surfers because they are fish storms that generate waves but have little weather impact to the immediate area. However, for better or worse, we all need storms of some sort to replenish our lakes, rivers, and groundwater.

I was out walking a bit today, waking up from a long night watching the BoSox. The warm nor’easter we are having (as opposed to what Kayamedic is getting farther up north), made for a reinvigorating walk. Sustained winds of 40-50 MPH, sideway rain… What a way to get rid of some cobwebs.

Oscar reached hurricane status but will start speeding northeast soon. In the next couple of days, we’ll be getting small (knee to waist) longer period swells in the NE breaks. Perfect stuff for longer surfing craft, not so much a waveski.

May have to take out my Impex mystic rather to catch some waves on Thursday morning.

Meetings were cancelled this morning because of the BoSox parade. Instead of the parade, I headed out with the long boat to surf the thigh-waist Oscar swells… 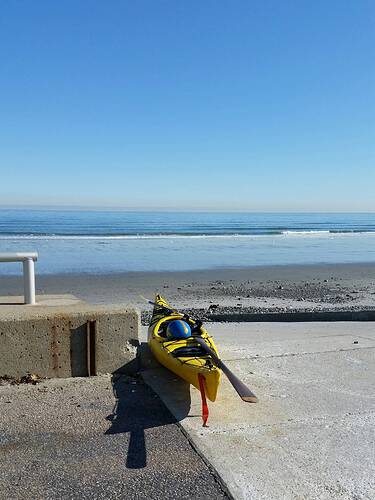 Talk about being a surf kook again… For two hours, I could brace, roll, go straight in (with partial use of the skeg) and sometime turn… (like the Titanic).

Totally have to relearn the capability (or lack of) with the long boat. One thing I have to try next time is to use a 210 touring paddle rather than 180 ww paddle. Might provide more leverage for turns with a longer reach.

I was reminded again what an ordeal it is to use a skirt, drytop, pfd, etc. for just a short surf session compared to a waveski. This definitely a skill to have but not one that I necessarily find enjoyable relatively speaking.

The water looks lovely. I’d go play in that!

Yes, layers and drysuit topped off with PFD are restrictive. I didn’t use a skirt on Sunday because the water was flat and there was no wind. Still felt like a Thanksgiving Day parade float…but better than being on land looking at the water.