I was cleaning my shed and something caught my eye near the floor. It was a small bird apparently tangled in a spiders web! It was very weak and exhausted from the struggle. Turns out it was a Ruby throated hummingbird. I carefully cleaned all the webbing from his wings and beak. Made a sugar/water mixture and tried to get it to drink, it didn’t at first, so I added more sugar. It started lapping it up. Spent two hours caring for the bird and after it regained some strength, it flew away! Made my day! 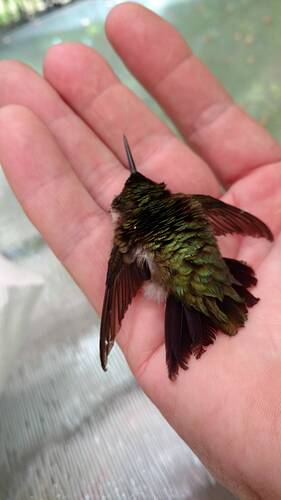 Good work. I have released a number of different birds over the years that got disoriented in garages or behind inside windows.

That’s awesome, Andy. I certainly wouldn’t have guessed that it would have taken food while in that kind of situation. Good job.

I know the body feathers are fluffed, but doesn’t that bird look a little bumble bee like? Big body, little wings and short tail? No wonder they have a high beat count with those little short wings. 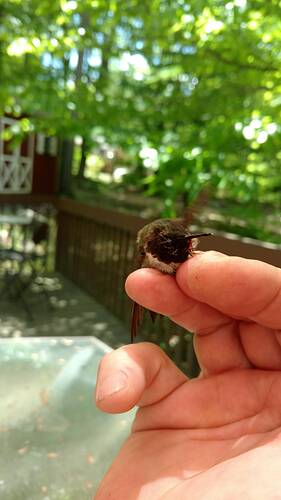 Thanks for posting him Andy.

Good karma for you Andy.
Have done similar, when they’ve been affected by cold snap passing thru our area.
Bring em in, wrap em up, rewarm them, and turn em loose.
Great feeling turning them loose again.

Yes, good on you, Andy–(And I’ll bet there’s a spider out there that’s got an ass-whopping coming its way

I stepped on it. His time is over.

I keep a really good multi-tool strapped to my PFD and have used to mainly to rescue birds trapped in abandoned fishing line. Once I rescued a gull trapped in a stainless steel shark-line.
A willingness to help others is an important trait of a paddler.

Very cool magical moments, Andy (the hummer, not stepping on the spider).

Hummers are feisty little birds. I go through 10# of sugar feeding them each summer.