We went to Hartwell this morning. Failed to understand how fast a front was moving. 2’ swells , some breaking and seconds apart
I knew it was was not rec boat conditions but my partner wanted to try.
We rounded the wind break from the put in and all forward progress stopped. A water treadmill.
We had a good workout and called it a morning.

I have been in t-storm gusts that moved my Sea kayak backwards despite my paddling efforts.

Such conditions are the pits.

Those conditions are fun to play in. But maybe not in a rec boat.

I remember one time when visiting my in-laws and paddling on Keowee the weather changed while I was back exploring a cove in my Swift Osprey solo (with my black lab). When we came out of the cove we faced high wind and 3 foot waves and just had to get around a point to the next cove. We (very slowly) paddled past a couple guys fishing close to shore in a boat on the point and they just stared at us…and dropped out of sight occasionally due to the waves even though we were within about 15-20 feet of them.

Up here in SW Michigan our 4-5 day heat wave broke today, we got some much-needed rain last night and the river popped up about 6 inches, and it looks like we’re facing a nice 10-12 day stretch of awesome weather. 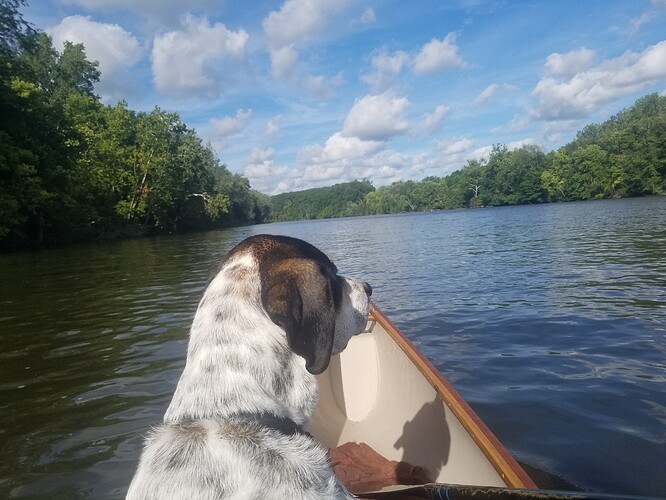 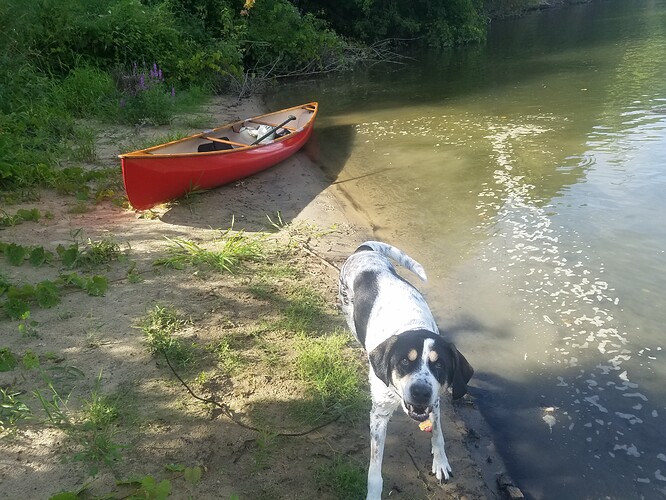 You can’t play if you can’t move.

I can recall one trip I took on the Wisconsin River with Durangoski (remember him?) and GuideBoatGuy. We set out in a pretty stiff head wind but clear skies and warm enough weather. I was in the only solo canoe, my Blackhawk Starship. Durangosi was paddling a Looksha IV and GuideBoatGuy was in one of his Adirondack guide boats. The Looksha didn’t present much face to the wind and the guide boat had leverage up the yin yang with those 6’ (or whatever they are) oars.
The wind just kept increasing. They were moving downstream and up wind, as I guess I was too, but soloing an open canoe it was getting to be a serious struggle to gain every canoe length. And still the wind just kept rising.
After fighting our way for several miles (and so were committed), I kid you not, we checked the weather radio and it said 40mph, gusting higher.
Paddling (very very slowly) against the wind, when we neared sandbars, you couldn’t precisely see their shorelines for the tan clouds of sand which were blowing off them in sheets into the river. Our hands and faces got sandblasted until we got upwind of them.
The waves kicked up, especially where the current ran most strongly against the wind, and I was regularly taking about a quart over the bow on every third or fourth wave. Necessity dictated that I had to stay in the stronger current and bigger waves because in the shallows I couldn’t sink a paddle deep enough to get in an effective stroke and the boat was in danger of bouncing off the bottom in the wave troughs. GuideBoatGuy got a photo of me in the trough of a wave with only my shoulders and head showing, displaying an expression of, well, great concern. An aquatic treadmill indeed. Going nowhere fast.

We made nine miles that day and, as I recall, I set my tent up in a shallow depression surrounded by a bunch of sheltering young willows. I was sore. Too tired to eat. Slept like a rock. I don’t recall a thing until I awoke to a perfectly calm sunrise the next morning.

We did, if memory serves, close to thirty miles the next day and made up our lost time with grace and ease.

But that first day was really one to remember… That’s one day that won’t ever fade into generalized memory like all those many hundreds of sunny sweet calm days.

That one was special. I love it. Now.

I’ve had two of those, both in a Tarpon 160. The first was only 2 miles upwind and tide but I pulled an ab muscle that bothered me for years.
The other was 6 miles in almost identical conditions from Capers Island to the Isle of Palms Marina.
We tried to watch something on TV that evening and passed out in our chairs. No pulled muscles that time.
I’m a slow learner , but will only do that kind of paddling out of necessity.

Ocean currents can send you backwards.