This should make visiting Key West a more pleasant experience…

Locals voted overwhelmingly to protect the environment and their own health by banning the vast majority of cruise ships from docking in Key West.

Good for the Keys, but I can’t imagine anyone in their right mind getting on a cruise ship in these Covid-19 times. A floating petri dish.

I just saw the news item that the first cruise ship to be sent out post-Covid into the Caribbean, allegedly with “safety protocols”, is now docked in Barbados with 6 infections on board and all passengers and crew in quarantine in their cabins, including a batch of journalists who were invited along to “see that we can do this right.” D’oh…

Reportedly, they had this vain notion that they could create an infection-free “bubble” by pre-testing and were so confident this was fail safe that passengers reported that masks were not even being used on board the first few days at sea. Only proves what most people with half a brain already understand: testing does NOT assure that everyone is “safe” – the White House “super-spreader” events have already proven that is a fallacy.

I see some of the new ships carry over 6,000 passengers. Sometimes there are multiple ships making port on the same day. That’s a lot of people being dumped into these small caribbean cities at one time.
Spending only $32 each that’s like 2 t-shirts and a souvenir glass drink at Sloppy Joe’s and then racing each other back to the buffet aboard ship.

Testing allows you to understand how bad it is, at a given point in time. Which is hardly a bad result. But it is not the same as controlling CoVid unless testing is joined with the other measures, including not allowing unmasked free flowing movement. For ex the NFL bubbles are actually doing decently. But large cruise ship behavior more closely college football. Where control is not so good.

But large cruise ship behavior more closely college football. Where control is not so good.

More like a prison or residential facility. Those are not doing well… Frat house and retirees gives me a disturbing image!

I hope Bar Harbor and Portland do the same thing. Studies have shown virtually no economic benefit.

Some years ago we were looking for parking in Key West and turned down an alley to be faced with a giant ship with ears disgorging hordes. We decided to get out of town

U.S. law allows cruise ships to dump raw sewage in the ocean once a ship is more than three miles off U.S. shores. Ships can dump treated sewage anywhere in the ocean except in Alaskan waters, where companies must comply with higher state standards. 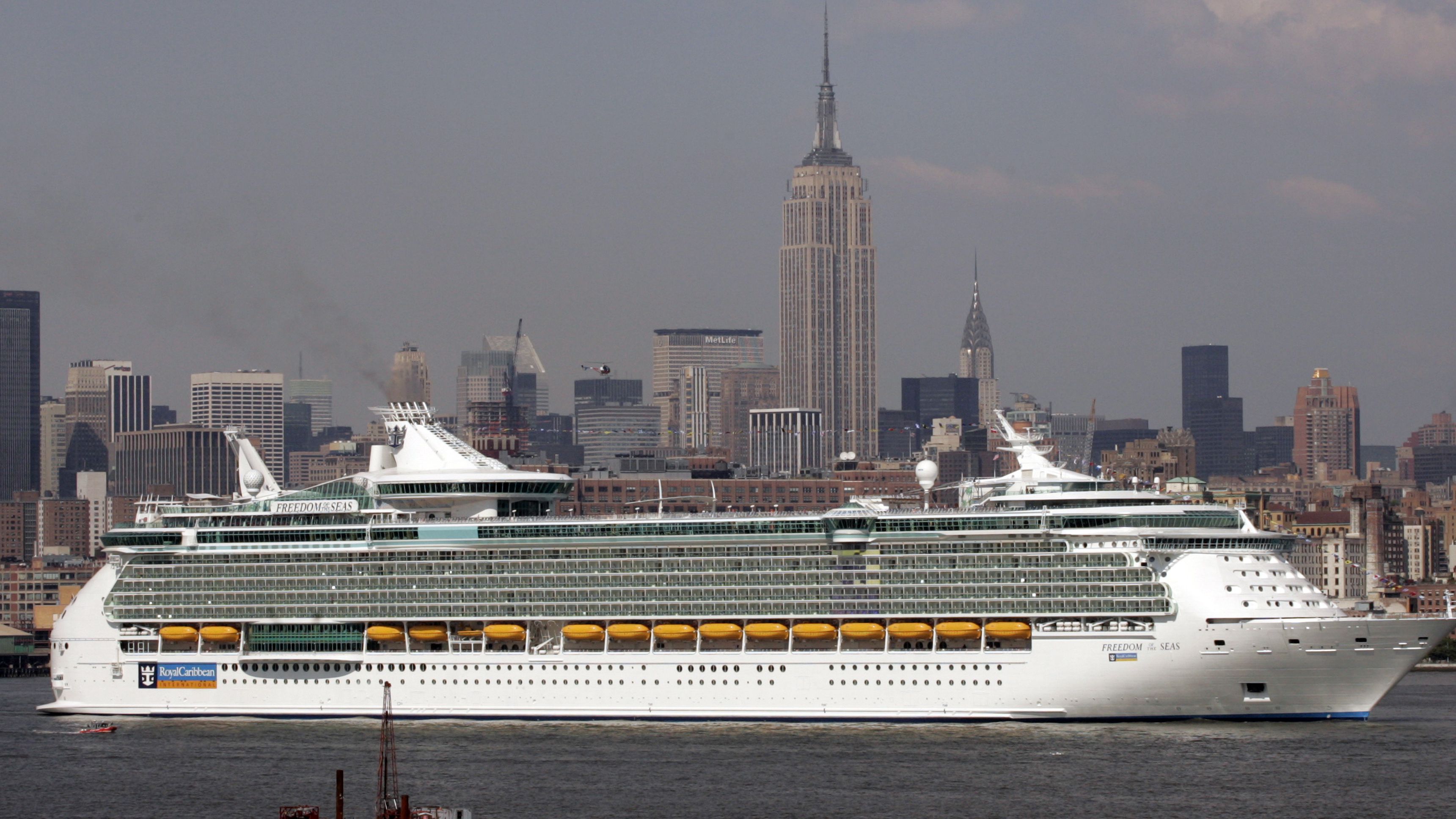 Under the current Caribbean regulations, ships can begin dumping garbage , including metal, glass and paper, 3 miles from shore as long as it is ground to less than an inch. Almost anything but plastic can be dumped beyond 25 miles.Mar 1, 2009

Cruise ships are floating norovirus delivery systems, yes, but they are also floating garbage disposals, spewing plastic crap straight into the ocean. Such, at least, is the case with the Carnival Corporation, who’ve been throwing pollutive waste...

That’s really gross. Depressing what we do to the poor oceans.

and then racing each other back to the buffet aboard ship.

Reminds me of my days on the f-i-l’s hog farm.

An international ban on cruise ships would be great. I’m not holding out hope for that, though.

The massive literal herds of cruise passengers spewed onto the streets of Juneau and Skagway—massive in both individual tonnage and aggregate blobbage—calls up one fitting term: The Ugly American. (I know non-Americans do it, too. The term still fits.)

Eyes agog and consumed by fervor to buy, as cheaply as possible, trashy trinkets and trappings of their “journey,” on they shuffled, ever-oblivious to anything but their sole mission: Get something really, really festooned with emblazoned declarations of “I WAS THERE!”, even though said items were stamped We Were Made Elsewhere!

They might even spring for a slightly pricier “authentic ulu knife set”…yes, made in China. I was gifted one after I watered one neighboring couple’s houseplants when they went on an Alaska cruise. The pathetic part is that the husband told my husband and me that we “should go on a cruise.” I guess I never told him I had sea kayaked (without outfitter) a third of the Inside Passage. Instead, we just said, “Doesn’t appeal to us at all. Glad you enjoyed your trip, though.”

Wish I’d taken a photo of the fur bikini that one souvenir store displayed. Real fur, I might add, the only real aspect of the whole ghastly caricature that tsunamis of grossly obese shoppers constitute.

When we had finished our kayaking trip and awaited the first ferry leg back, a fellow kayaker from B.C. leaned into my ear and whispered, “Are ALL Americans so FAT?!?”

I first went to Key West on a last minute assignment to photograph the Hennessey Cup races many, many years ago. Subsequent to that I returned many times to scuba dive off of Big Pine Key and a couple of times on cross country motorcycle trips. There were no cruise ships in Key West at the time and I found it a true tropical paradise with friendly people. I considered retiring to the Keys some day.

A couple of years ago I went on a Paddle Florida Keys trip from Marathon to Key West and stayed a couple of days on Stock Island, just north of Key West. Loved the trip, but regarding Key West I was horrified! Vast armies of self entitled bumpkins jamming once friendly neighborhood bars and cheap import souvenir junk shops. The cruise ships dwarf the town. Although business owners are probably happy, the cruise ships have ruined the Keys for me That plus the horrible traffic changed my view forever. Hurricanes the last few years didn’t help either.

I used to periodically spend a week on Gorda in the British Virgin Islands, renting a small villa. One huge plus for Gorda is that the reefs and shallow harbor preclude cruise ships, and the Rockefeller Resorts Little Dix Bay hotel complex controlled the tiny dirt strip airport. There was nothing on the island over 3 stories and most of the residences are individual homes and smaller inns. Unfortunately, the wealthy increasingly discovered the place and the family from whom we rented over the decades finally got an offer they couldn’t refuse and sold their prime hilltop property and two homes to some rich creep who built a McMansion on the large naturalized lot. I have not been back since 2012 so I don’t know how much else has changed but I think at least they are still spared the cruise ships by their location, reefs and steep shorelines. Most beautiful white sand coral beaches, snorkeling, diving and sailing you can imagine.

On the other hand, St. Croix in the USVI and Tortola in the BVI both have cruise ship harbors and you can see and feel the difference that creates in the local economy and culture and even crime rates. We visited St. Croix the winter of 2008-09 in the midst of the Recession – nobody was traveling so we got a condo suite in a spectacular resort for 30% the normal rate and were sharing the place with only about 10 other travelers. We took a day trip to Fredericktown at the west end of the island which has the major cruise ship dock . No ships were sailing that season and the entire town, which is 90% tourist tchatchke shops, was almost a ghost town. Quite eerie to walk through, but it was clear that cruise ships were the entire economy of the place.

I know many people love them, but I view large cruise ships as a pox on the sea and land. If the pandemic crushes that industry you will see no tears from me.

Some stores in small towns might even open up ONLY during cruiseship invasions. We tried to get a few supplies at one such place in Wrangell.

Sort of like in Sturgis. Most of the bars are holes in the wall for the locals, but during Bike Week they open up an area the size of a convention center. Some businesses are only open for that event and a huge amount of the town’s income is likewise made that period. Sturgis has a year round population of about 7,000 people and close to half a million people attend the rally generating over 800.million dollars in revenue.

Of course, the locals only have to deal with the crowds for less than two weeks a year.

And speaking of COVID outbreaks…

Sturgis and all the other places the participants went…gee, thanks for the extra cases of COVID, guys. You could’ve at least worn masks while visiting our small towns which previously had decent hospital bed vacancies.

Reportedly there may have been as many as 700,000 yahoos that decided to descend on Sturgis. And now the upper Midwest, particularly the Dakotas, has some of the most precipitous infection and hospitalization rates in the country in the weeks since. Uh… d’oh.

And no effective way to track those who returned from that giant Petri dish of spit sharing so all of the partyers potentially brought back the virus to towns and cities and family members across the country.

Let’s keep it tidy, per the FAQ. This is about cruise ships being banned from the Keys, not Covid or bikers.