Got on the water today

In the 50’s today and many put-ins are finally opening up after the December deep freeze, so snuck out with Zoey. The St Joseph River is quite full so there was a nice strong Spring-like current to paddle against, plus there were strong gusting headwinds…strong enough to make you immediately redevelop your respect for Mother Nature. Great to get on the river! 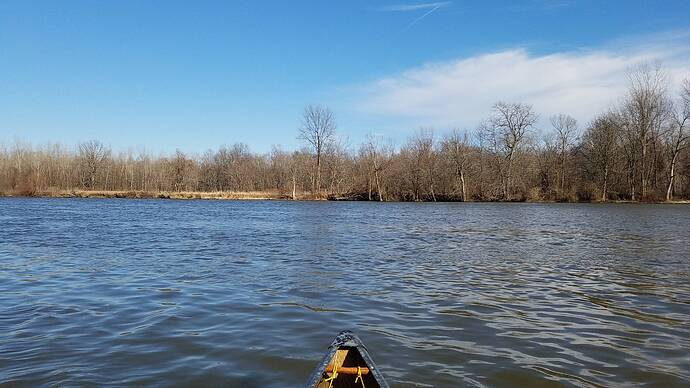 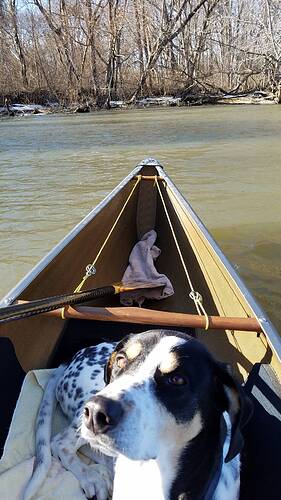 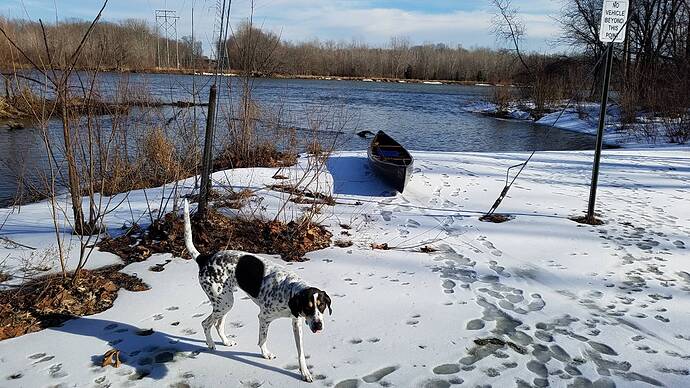 Looks quite wonderful. You sure don’t have much snow down there. Plan to take a drive tomorrow to check out launch sites to the Jordan. I know I can get on Little Traverse Bay, but winds will be gusting to 30 mph tomorrow. Too bouncy even if there wasn’t ice to worry about.

Cool! Great to get out in the sun.

Hopefully me out today.

Looks great. Nice to be out on the water with little company, makes you feel like it is more your own.

Seems fun. great photos you have there

Yesterday was a very nice spring-like day and I hadn’t been paddling for awhile, because of an awful cold and the weather wasn’t right for it either. I just took my Loon to the town lake and paddled for a few hours. I was happy to find that the cold had not sapped my strength and I actually put quite an effort into making the Loon move right along.

The sea lions have arrived, so I"m not going to be in any big hurry to take one of the sea kayaks out on the Columbia–at least not where the lions congregate. The weekend is looking very nice and sunny, so I might take the Sirocco to a bigger lake, but depending on the tides, I know a spot on the river where the lions aren’t likely to be.

I had a great day planned hanging out with my neighbor. We were going to lunch and then target shooting.
At 4 am a stomach bug got me. I had not vomited in years. By 7am , I had made up for it.
My daughter the nurse told me it is running rampant in the schools.
A waste of a beautiful day.

FSKA got out and paddled the ICW yesterday. Winds were 10-15 from the NNE with temps around 58 degrees. A light rain fell at times. Tide was rising. All that meant that the when the tide was with us the father north we got from the Ft George inlet on and incoming tide the more the incoming tide and wind from the Nassau sound was against us. Of course paddling back south the incoming tide was with us and the wind was with us longer that coming up the same water. Nothing is ever fixed when tides are concerned. Well with the possible exception of how good the cold beer tasted at the Sand Dollar afterwards. 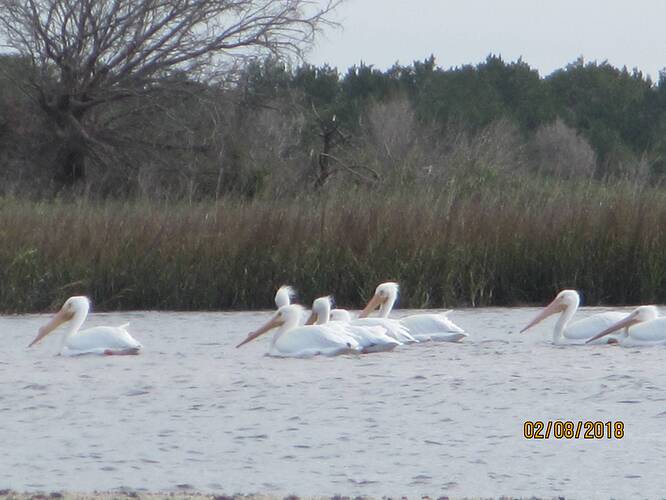 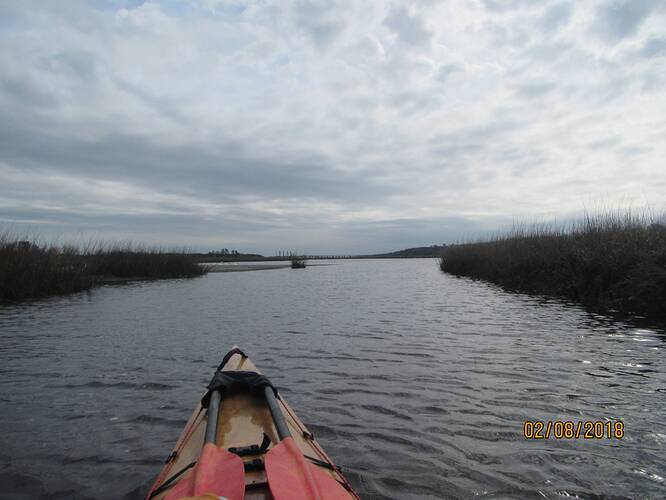 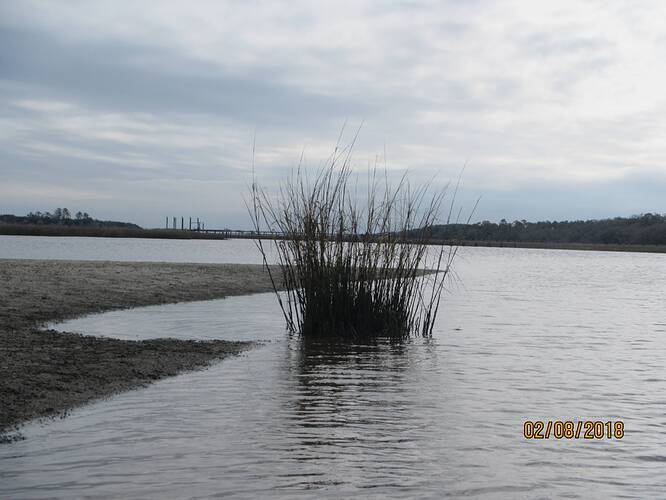 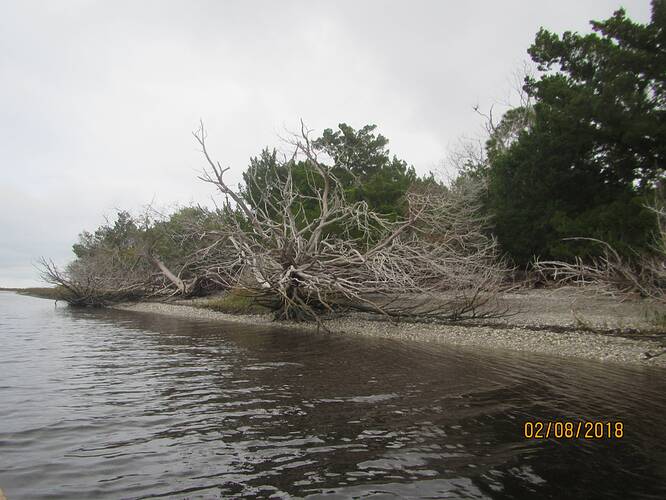 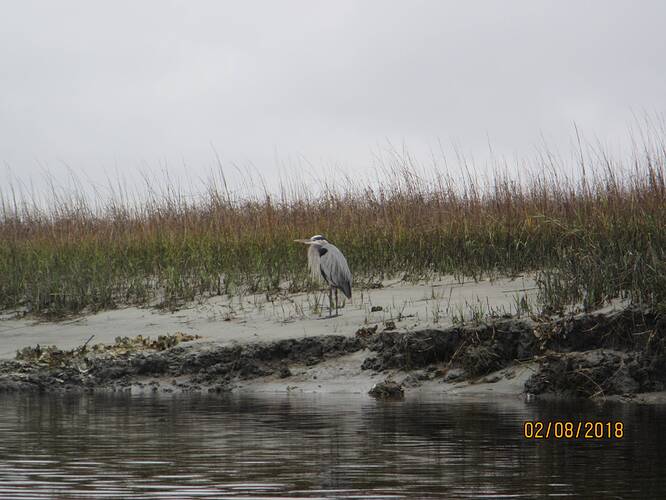 Overstreet and magooch - great stories and pics! Seems like a great day on the water any time you get to share special moments with wildlife (except maybe sea lions).

A lot of people would argue that sea lions in general are fairly benign creatures that for the most part are just curious about humans and their water craft. My experience is that is fairly true with exceptions. When the lions are in the majority, they can become quite aggressive and if there is a fresh meal (fish) to be had–no rules apply.

A few decades ago, sea lions were very nervous around boats and fishermen, because they used to get shot by commercial fishermen and some sports fishers, but now days, that is outlawed and the lions have come to associate boats with a possible easy meal. Some fishermen still keep their fish on a rope hanging in the water–which is a petty sure way to lose them if sea lions are around. The sea lions also have learned that grabbing a hooked fish is also easier than chasing them down while free. The net result of these factors, plus the extreme overpopulation of the lions is that in a kayak, you are wise to try to avoid confrontation with these animals. Some of the Steller bulls weigh nearly a ton and a half and are as big as a walrus. They could mess you up pretty bad if they took a notion to.