So there were 18 kayakers camped at Santee State Park this weekend in SC. I paddled Friday afternoon with String"s grandson and his friend for a short trip. I had joined 4 other paddlers when I reach for my camera to take a photo only to realize I forgot my PFD with the camera in its pocket. Wow what a dumb mistake that could have cost me $150 if DNR had checked me I was only a short way from the ramp and headed back immediately. I always wear it and for reasons other than a hefty fine. As I approached the ramp String with the 2 boys and the kayaks were there. The boys wanted to paddle so I said sure as I walked to my car I said remember don’t forget your PFD. String rolled his eyes and had some smart remark.

It’s always good to meet up with good paddling friends for the first time each year so there was lots of catching up to do as we cooked hotdogs over the fire. The next morning we paddled across the lake and around Persanti Island. The wind was up a little that morning so we had a fun bumby paddle over to the Island. Once behind the island we were sheltered from the wind. We saw lots of Osprey nesting, numerous cormorants, anhingas, coots, a blue heron, and laughing gulls. On our way back across the lake a huge flight of cormorants flew by. It took several minutes for them to pass. There were hundreds in the air flying by. I missed the afternoon paddle launch so packed as I was heading home after the evening potluck, and boy was I lucky not to miss out on that. Headed home about 9:30 and got back at 11:30. I had a good time with new and old paddling friends. 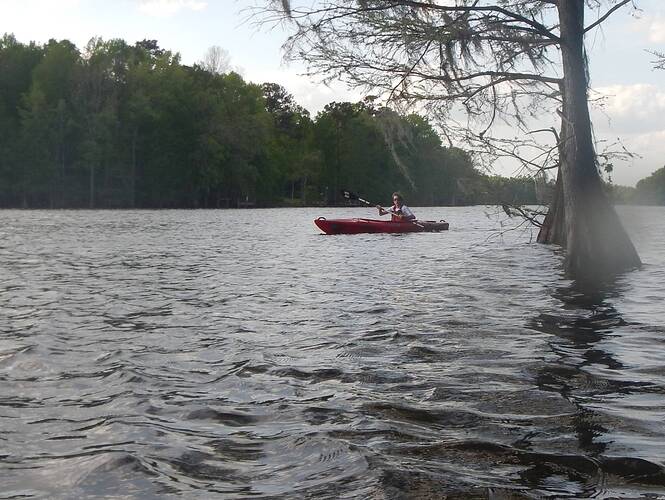 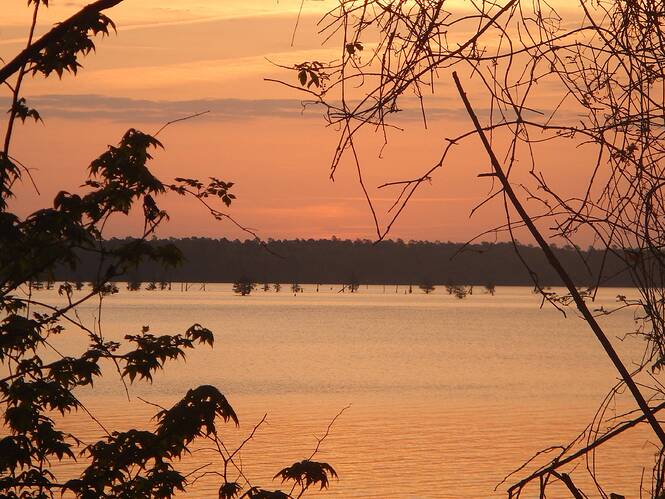 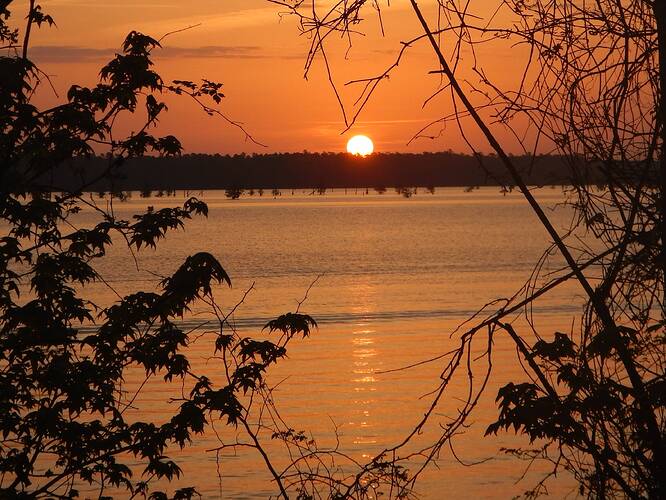 Paddling the lake to Persanti Island 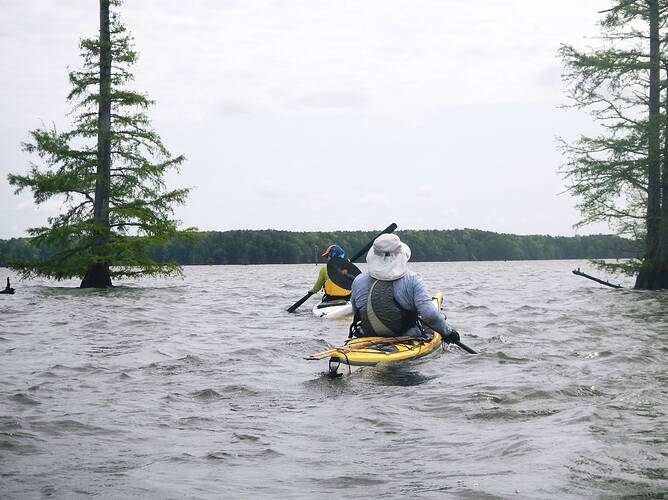 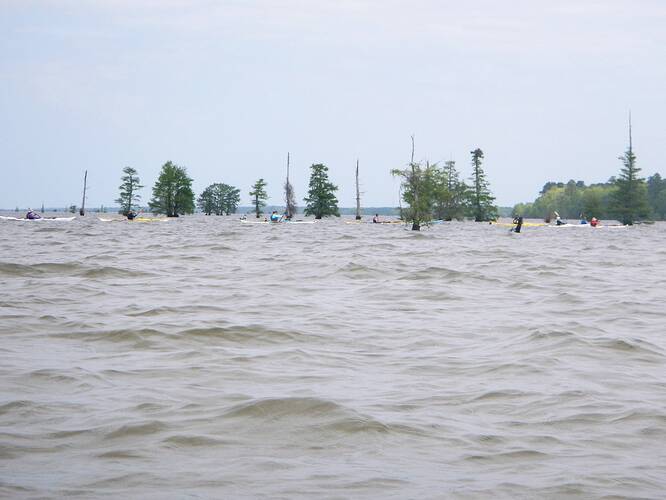 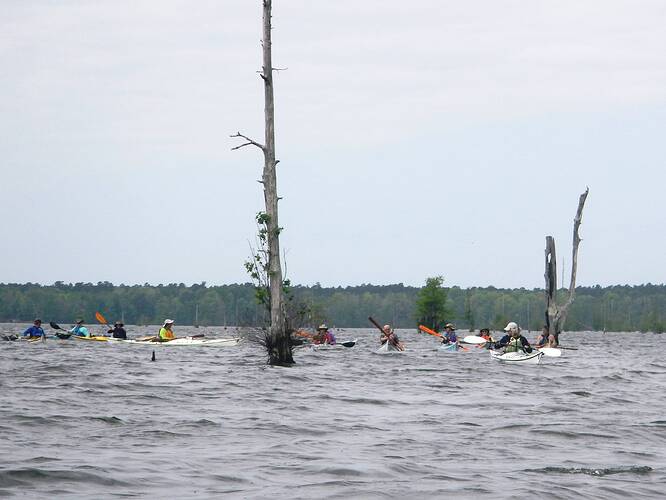 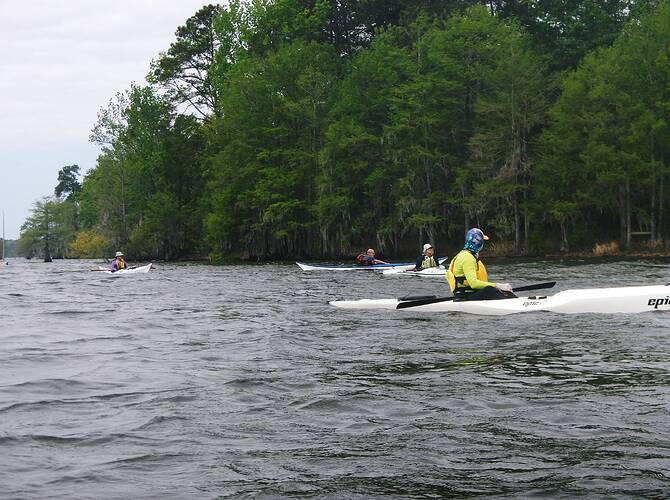 Flight of the Cormorants 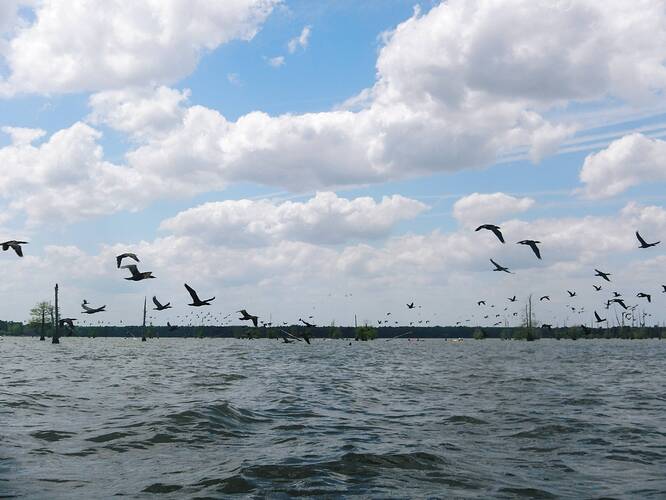 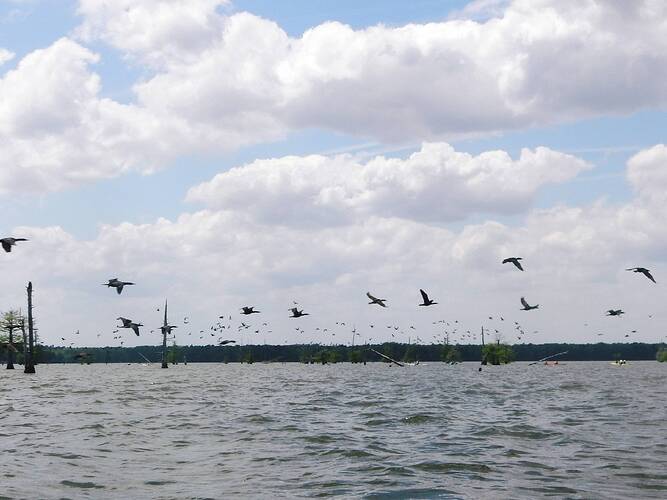 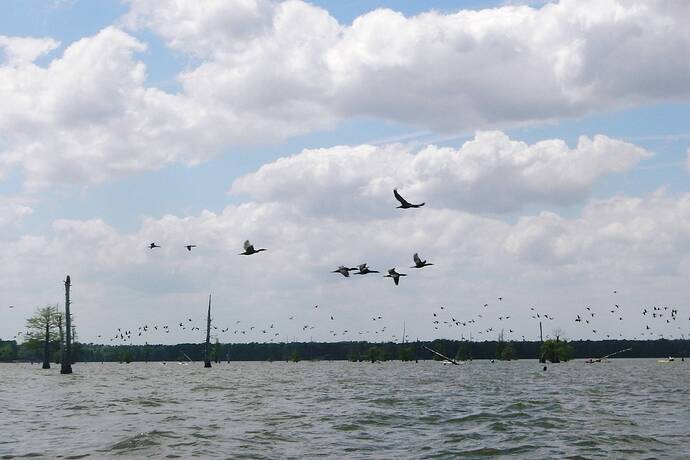 It sure looks like a fine place to paddle, camp, or be a cormorant

You should see the geese in the fall. The lake is covered with them. We had a campsite with a great view of the lake. The campground is roomy which is good because it is usually heavily inhabited by campers the size of semi trailers.
The lake is bordered by Cypress swamp. I took the boys in there while the sea kayaks headed out on the lake.

Just look out for the “land mines”, aka stumps. The tops sit out of sight just under the water. Waves make coming down on one a bad thing.

Yes several of us hit mines, but no one was blown out of the water! I almost got stuck on one, but managed to escape and remain dry.

Looks like a great time. Hopefully you beat the storm home.

We did. Had some heavy rain, and a tornado over by yatipope near lexington, but it missed them.

Thanks for the concern. It was a fun trip. If you haven’t been to Sparkleberry Swamp you will have to join us the next time we go. You will be paddling in an aquatic forest. Easy to get lost, but a GPS is your friend. I’ll let you know when I am planning to go next time. It is at the beginning of Lake Marion.

I should add join the Greenville meetup group. They are good folks and some excellent as well as beginning paddlers there. they do frequent paddles in the upstate.

Thanks for the invitation. It’s tough for me to get out with a group due to two jobs, family and other responsibilities however it’s not impossible. I’ll keep a watch for a time I can join you. Thanks