I’m looking at an add for a “vintage” Grumman, but it has fewer ribs than I’d expect. I see only 3. Looking at new Grumman’s I see that happens for the 17-footers, but I’m worried about oil-canning in this older canoe. Aiming to use it for 2 adults and 2 little kids on some canoe camping. Any suggestions?

Do you mean thwarts? The bars that run between the gunwales?

Reinforcing ribs across the bottom of the hull: 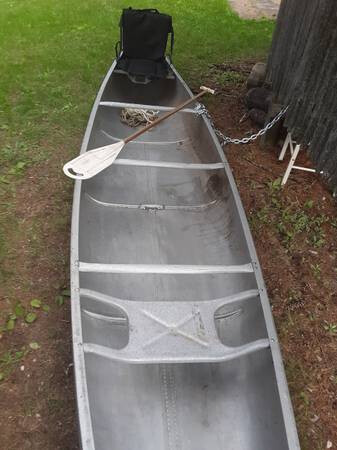 I would think those old Grumman’s are tough as nails. I had one for a few years. It might show a few dents if it gets pounded on sharp rocks, but that just adds character. I chose Grumman because I knew it would have to be left outside in all seasons. Fancier canoes are delicate.

Yes, the standard 17’ Grummans had 5 ribs although Grumman made some special order boats intended for whitewater use with 7 ribs and a shoe keel.

I suspect that a three rib boat was a special order lightweight version. I would be leery of buying it for your intended use.

More than a couple of decades ago, Grumman made aluminum canoes using at least three different thicknesses of aluminum.“lightweight”, “standard weight”, and “camp weight”. I have a lightweight model that I bought in 1973. it is at least 10 pounds lighter than the standard weight, and 15 pounds lighter than the heavyweight model that was meant mostly to survive mishandling at youth camps and other rough users. My lightweight has more ribs than the standard or camp, I am positive of that. I don’t know exactly how many as it is in the barn at my camp at the moment.

We had a 13 foot Grumman lightweight when I was a kid. My brother has it and I’m jealous. I can vouch for how tough they are, probably better than a competitor’s standard weight, and IIRC cost new was higher than cost of their standard.

Thanks for the info. Looking at a few aluminum ones tomorrow, and good to know that a standard Grumman had 3.

Well, I thought there were more myself. I expect yknpdlr and Pete are right. I’m sure they made a few different variations and may have changed slightly over the years as well.
This is, in fact, my second Grumman. My first was stolen from under the porch of a place I rented when I first left home. (Nothing good ever happens to me when I live in a city.) I replaced it in '78.
I recall as a kid trying to sleep in that first one and the ribs being annoying, so there were probably more than three. I just don’t remember how many there were - that was a long long time ago.
But three ribs are enough. I’ve seen some rental Grummans that have become “hogged out” (“reverse rocker”) from trying to get over logs by teeter tottering them. Don’t do that, of course… but if you did probably more ribs would be better suited for it. But even those didn’t leak, at least not badly enough for the livery to take out of service immediately. They just didn’t paddle well and were available for sale (cheap) at the end of each season…
But I wouldn’t worry a whit about carrying two adults and two kids, or even four adults in calm water. Grummans can take the weight.

The 17 foot Grummans and Alumacrafts I have seen all happened to have 5 ribs. But a good many of those were at Boy Scout camps and the like.

Out of curiosity, I checked Google by searching for 17 foot Grumman canoes and 17 foot Alumacraft canoes and searched images. Of course, there are lots of photos of those boats. In those in which the ribs can be counted, some have 3 and some have 5. The 5 rib models seem to predominate but I did not do any exhaustive search.

I have a friend who I used to paddle with in the Chattanooga area and occasionally since named Don Bodley. Don was one of the pioneers of whitewater canoeing in the southeast back in the late 1960s and early 1970s. Before Royalex boats became available the best alternative for whitewater canoeing was usually aluminum. Don is mentioned in a great book called “The River Chasers” which covers the very early history of whitewater canoeing. Here is a passage from it:

“In the late '60s and early '70s, paddlers on the western side of the Appalachians in the Southeast from the Tennessee Scenic Rivers Association (TSRA), the East Tennessee White Water Club (ETWWC), the Tennessee Valley Canoe Club (TVCC), and other small groups, paddled their open Grummans on whitewater in Tennessee. However, as they developed their paddling skils and ventured onto more difficult rivers, standard Grummans were not the boats of choice. Instead a beefed up shoe-keeled Grumman was needed. Don Bodley and Don Hixon of Chattanooga ordered and sold special Grummans, built of a heavier gauge sheet and with seven ribs instead of five.”

Back at that time I believe that most Grummans had 5 ribs but I could be wrong. I don’t know how much of the additional strength could be attributed to the extra two ribs and how much to the heavier gauge. But the fact is that guys were tearing standard Grummans in half on a regular basis. I see that a 7 rib model with a shallow draft (shoe) keel is still in the Grumman catalog, but the material thickness is .050 gauge, same as all the other models. They do also still offer a 17’, 5 rib model “built specifically for camps and outfitters” but it too has the same .050 gauge. The fact that the gauge is the same for the three models suggests that Grumman feels the additional ribs add durability for outfitter and whitewater use.

I just checked. My lightweight (1973 model) Grumman has seven ribs. 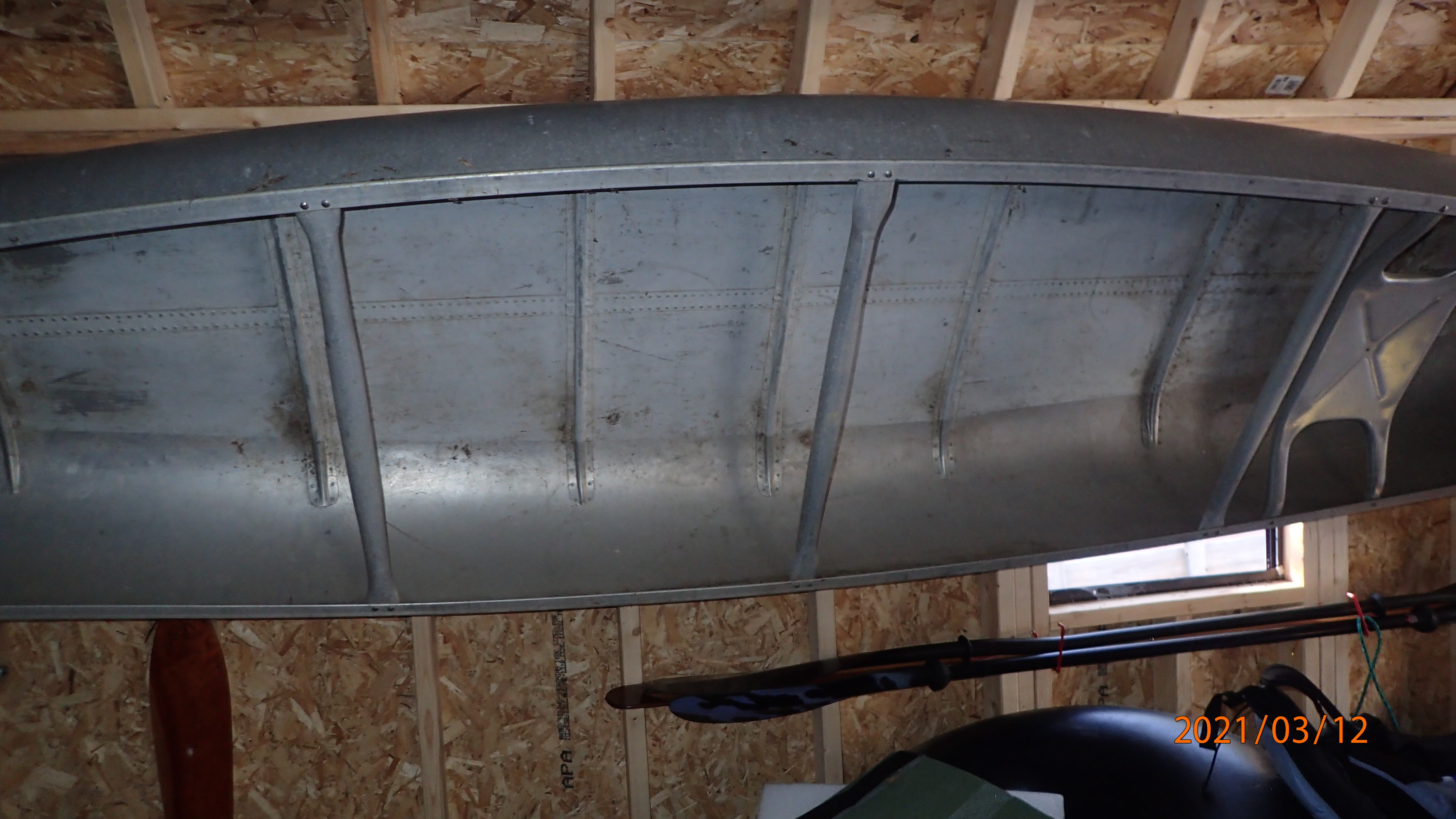 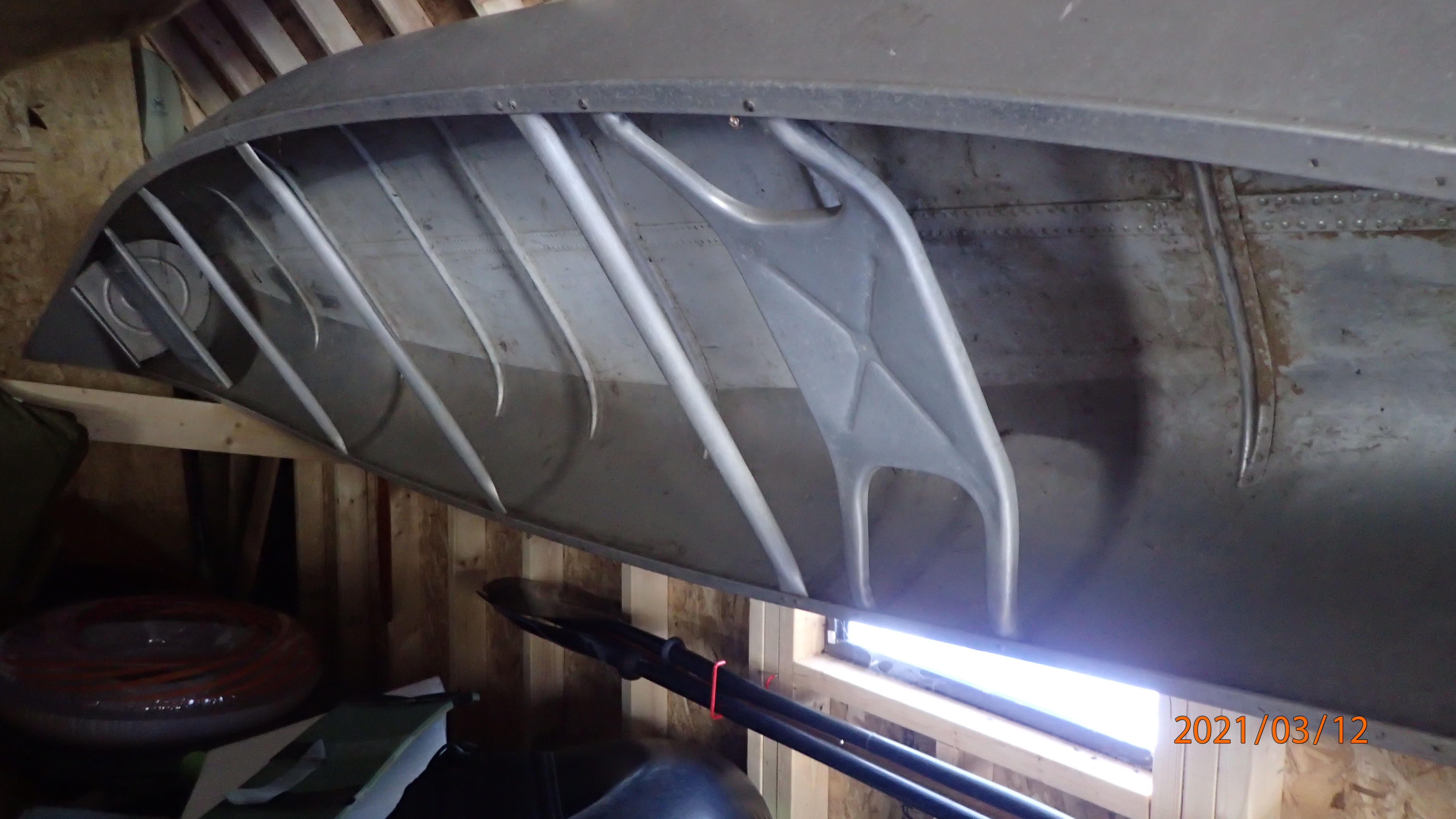 Here is a review of a 17’ Grumman double ender canoe that has six ribs: Grumman's 17' Double-Ender - Small Boats Magazine

It appears Grumman made 17’ canoes with a wide variety or rib numbers. By the way, your photos don’t display on my computer.

By the way, your photos don’t display on my computer.

How about now? I tried various link formats. 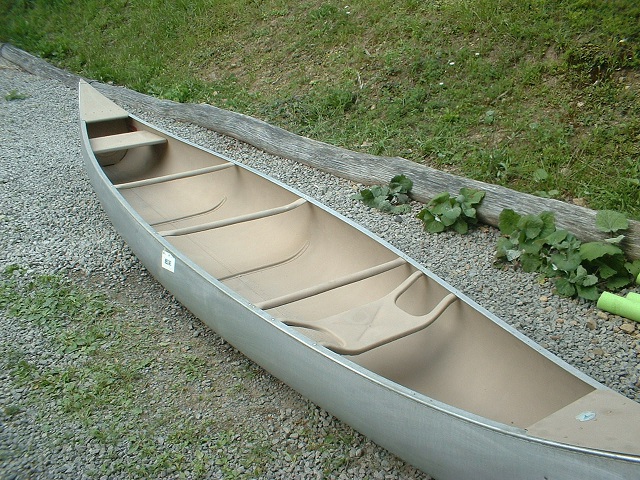 Mine has 3. Its a 1972 17’ I painted the inside flat tan because it is very non reflective and cooler if you are in it all day.