Hi–
We have 4 Pongo 140 kayaks on the salon roof of our old wooden boat, and we lower/raise them using a crane. In the past, we have used a harness made from a line with a swivel hook in the middle; we also use a bow and stern line to keep the kayaks from swinging. All the lines are attached to the webbing and rubber handles. There is no strain from the bow and stern line; we just use them to lightly keep the kayak from swinging in circles. Unfortunately, the strain of the lifting harness pulling sideways on the handles has caused the webbing on the most fore or most aft part of the handles to rip out. I’ve attached a rough drawing of the harness and where the line broke (green line). The problem is that this could be catastrophic, as we raise the kayaks about 20 feet in the air above the water.

I think the breaking of the handle is primarily due to the angle of the pull (angled rather than straight up) from the harness, although it could be due to limited lifespan of kayak handles. I have been thinking of a regular schedule of handle replacements vs alternative attachments. My thought for an alternative attachment is to put a reinforced padeye or coachman’s strap similar to what one might find on sailboats just inside of the handles. My questions:

Are you lifting the kayak in/out with a person in it? If so, the handles likely were not made to support that weight.

Can you post a photo of the handle with ripped webbing - not totally clear what you are talking about?

Is the webbing ripping or are the handles screws being pulled out. Why not replaced with reinforced heavy duty 2 inch webbing?

Hi
Thanks for the comments. In answer to comments:
Peter: Lifting kayak totally empty.
Sparky: Webbing is ripping, screws are morph pulled out. I’ll get a picture tomorrow AM. Reinforced webbing might be a good idea! Not as comfortable as a handle but we don’t use the handles often.
Overstreet: what did you use as backing plates? Agree that lifting up would be better than from side, but longer harness creates other problems in getting kayak high enough over rail on upper deck and in keeping harness inside boat while kayaking.

Could you mount pad eyes with backing plates at the back and front ends of the cockpit? That would create a much better way to lift.

If the main issue is the shallow angle of the lifting ropes then couldn’t this be eliminated with a sturdy wooden or tubular aluminum pole acting as a “spreader”?

Wolf–agree that this is the problem. We weren’t sure if the ~3 ft distance on either side of the cockpit would stop the pitch-poling movement. If we went with this, what would you use as a backer?
kfbrady–we thought of this, but It would be difficult to lean off the ladder to attach the spreader without getting bonked on the head. There’s a 10 ft ladder to the water on the side of the boat (the kayaker lowers themselves from the ladder into the kayak. No swim step). To retrieve kayaks, I stand on the lowest rung to attach the crane to the harness. I might have a photo of this in action.
Here are some photos of the ripped handle. Note that the line is the “control line”, not the lifting harness. 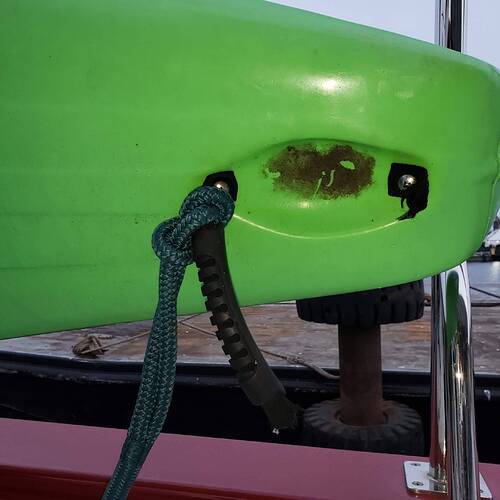 What about a couple of loops of webbing that you slip over the bow and stern? 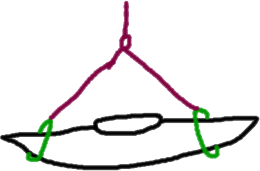 If a spreader won’t work, then I’d either mount pad eyes with backing plates just both in front, and behind the cockpit

Another option might be to make up a sling. Basically just two loops (maybe joined together laterally) and you could just slip each loop over each end of the kayak…

Plenty of places sell them, or https://www.strapworks.com/ has everything you need to make one, or will even custom build one for you.

ptickner–we thought about that, and it might be a good option, especially with webbing rather than straps… Here’s the scenario. I go down the ladder, hang off with one hand with the bowline of the kayak in the other, use my feet to maneuver the kayak, use my foot to pick up the (current setup) harness, clip it on to the end of the winch cable (which has a very heavy weight on it, which I try to keep away from my head). Before, we used to have the harness on the winch, and I would clip the harness onto the handles, which meant pushing the kayak fore or aft with my feet and then reaching down to water level to clip. It’s much easier to have one middle point of contact, especially with waves… I’m not sure I could get the two loops around the kayak easily. I’d also be afraid that they might slip off one end or the other. Here’s a photo of the ladder. There are more photos of the boat and people kayaking (but couldn’t find one quickly of someone getting out of a kayak) on our blog at www.gyrfalcon88.com/blog 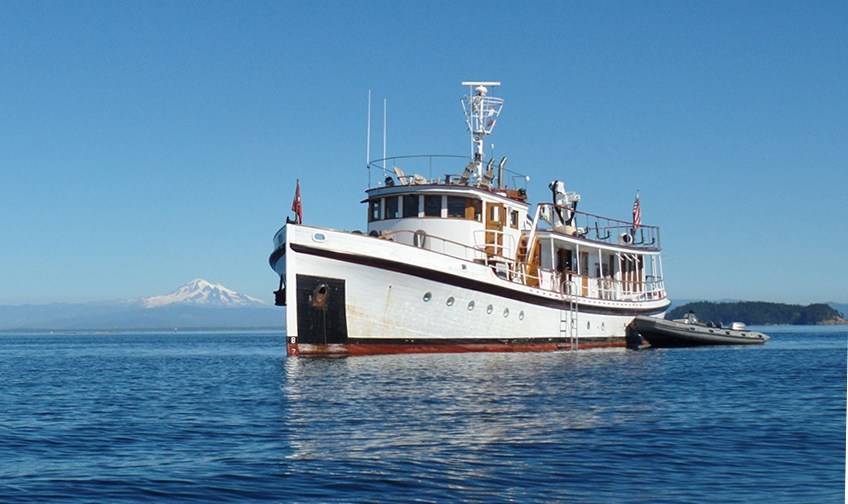 I think I’d be using a sling. It just spreads the load the best. I’d use 2" polyester webbing - breaking strength about 6,000lbs - and fabricate two loops for one kayak. With 4 kayaks I’d want at least 2 “sets”. I’d make a large loop in the free ends as shown below. It would be relatively easy to put one loop over the bow, one over the stern and then join the loops to the winch cable via a large SS carabiner. You could also sew large SS D-rings into the loops to avoid any abrasion on the loops. You still have just one point to connect to and if you size the loops correctly there is no way the kayak could slip off the loops once there is some strain on the cable. 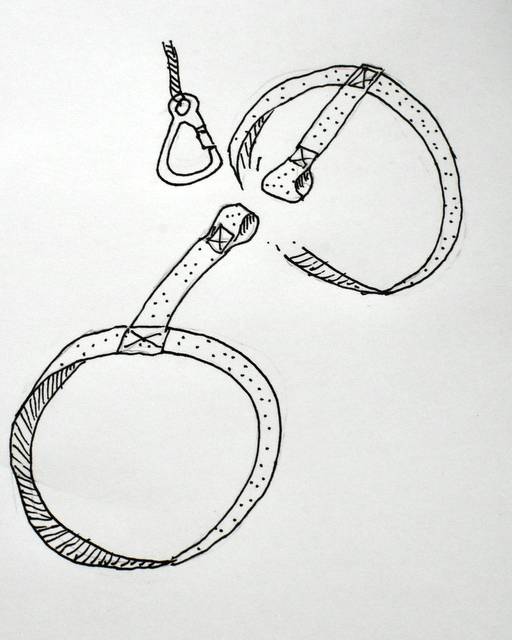 The drawback of webbing alone is that the loop hangs slack when empty and tends to choke up on the boat when around it. I suspend my kayaks from the basement ceiling using rope or webbing that is threaded through 18’ to 24" sections of hollow closed cell foam “pool noodle” or old chunks of rubber garden hose. This not only keeps the suspension loops open (like a curved trapeze) so the ends of the boats can be easily slipped into them, but the boats slide more easily in and out of the loops.

Might be something to consider when designing your lifting arrangement. If you were concerned about them slipping loose during lifting you could use two lengths of the hose or pool noodle on each trapeze and then connect the two trapezes together under the kayak hull with a simple length of webbing or rope with carabiners or swivel latches at both ends that would clip over the rope/webbing in the gap between the two sleeve sections.

@Nancyeverds@gmail.com said:
Wolf–agree that this is the problem. We weren’t sure if the ~3 ft distance on either side of the cockpit would stop the pitch-poling movement. If we went with this, what would you use as a backer?

You might still want a line running to the bow and/or stern lifting handles just to help guide the kayak during loading and unloading. That should also help with the pitching motion. As far as a backer, a 1/16-1/8" thick stainless steel plate would be nice, but the kayak deck might be crowned so that a flat backer doesn’t fit the shape well. Stainless fender washers (big washer/small hole) would probably be adequate as well and you could probably bend those to match any curve in the hull. A matching pad eye, upside down on the inside of the hull might also suffice as a backer, especially if you could keep the angles of those lifting lines around 45 degrees (at 45 degrees, the tension in each lifting line will be 71% of the total kayak weight - the tension is just weight divided by 2 x sine of angle relative to horizontal).

You could test the approach of lifting from points at the front and back of the cockpit by attaching a couple of C-clamps at those positions (use some bits of plywood as pads inside and outside), then rig up a lifting line to lift by the C-clamps. You just need to lift a foot or two to try it. I wouldn’t suspend a kayak 20 feet up this way.

The lifting bar and sling approaches are both also great but I can see that the simplicity of snapping a snap hook into each pad eye would be attractive.

Nice boat by the way!

I used aluminum plate likely 1/4". It’s what I had. And /or big fender washers…have used both.

I have those handles on my kayak that has spent the last two summers on the truck. Sun not a problem. You are failing by angle of pull. Use the spreader. Doesn’t have to be full length. Also if you can switch to a square “washer” under the screw it won’t penetrate the webbing so fast.

Hi–Update on this old topic. We finally decided what to do:

That looks pretty good; I assume the bolts, washers and nylocks are SS.

Yes, all stainless. Good idea about the bolts. Or maybe some acorn cap nuts.