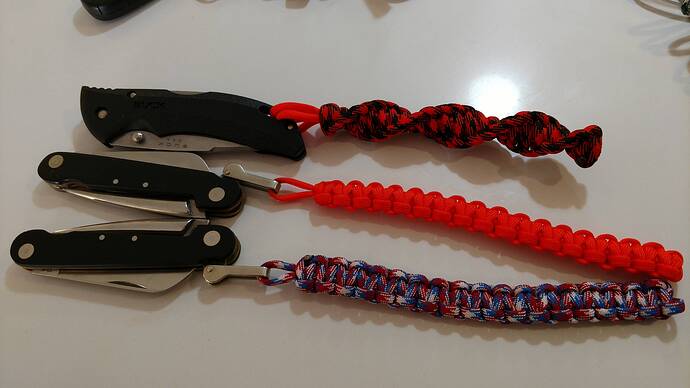 Easy to pull keys out of pocket or knife.

look really nice as the knife sinks under the water after you drop it.

Easy to put float on a knife you are using in water. Float with small caribiner What’s on your knife to make float?. Made to easily pull things out of pocket instead of digging to the bottom all the time.

My Lendal key, and some cord, is my lanyard.

My knife is attached to a custodian’s key chain on a reel.
Saved me a LOT of replacements.

Those wine-corks made into a key float are too light for my key. Even after I filed most of it down to lighten that key, it still sank with a wine-cork float.
Pretty though.

Key chain reel would probably not last me long in saltwater. My vest knife I have thin bungee.

A lanyard is useless if it’s not attached to your PFD; otherwise it’s just a lost knife waiting for a place to happen. A huge float just makes things more cumbersome and wastes valuable pocket space (I’m assuming that you don’t want it flailing around in front of you while you’re paddling). If you don’t stow the lanyard or float, the odds are good that it get snagged during a rescue and the knife will end up in the water.

I keep a rescue hook (much more useful than a knife in an actual emergency) in a quick-release sheath, with a lanyard that stows in a pocket, except for the short length that goes to the hook. It’s quick and easy to deploy, only requires one hand, won’t get lost if I drop it and it’s much less dangerous than a knife if it does happen to get dropped or pulled out of it’s sheath during a rescue.

I keep a Swiss Army knife in the day hatch for spreading peanut butter, opening wine bottles and performing other land-based chores.

I keep a stainless steel sailor’s rigging knife with about a 2’ lanyard in a pocket and attached to my PFD.

I’ve also used the same knife for almost 1000 scuba dives and it’s been all I’ve ever needed.

My knife for Kayaking has flat tip stored in my pocket. I forgot the brand. It is not a folding knife. Bungee (thin) tie to small D shaped lash ring in the pocket. Top knife a Buck is in my pocket daily. Illegal in NYC over 3.25" legal on Long lsland at 3.5". Other two are Camillus Marlin Spikes made in USA vintage knives. Just bought another one. So now I have three each with different blades. Yea I am nuts. Think I’ll get another straight blade for my lash tab with no bungee just leave it free preferably hook on end but not a folding knife. Ones I see all fold on NRS site. 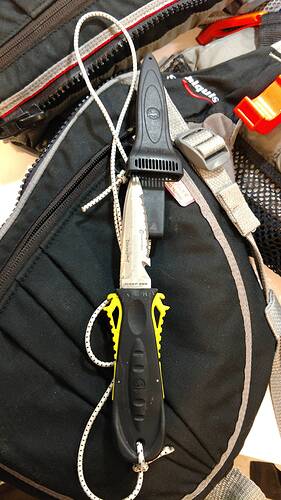 Wenoka
Enough bungee to reach anywhere my arms can and a bit more when stretched. 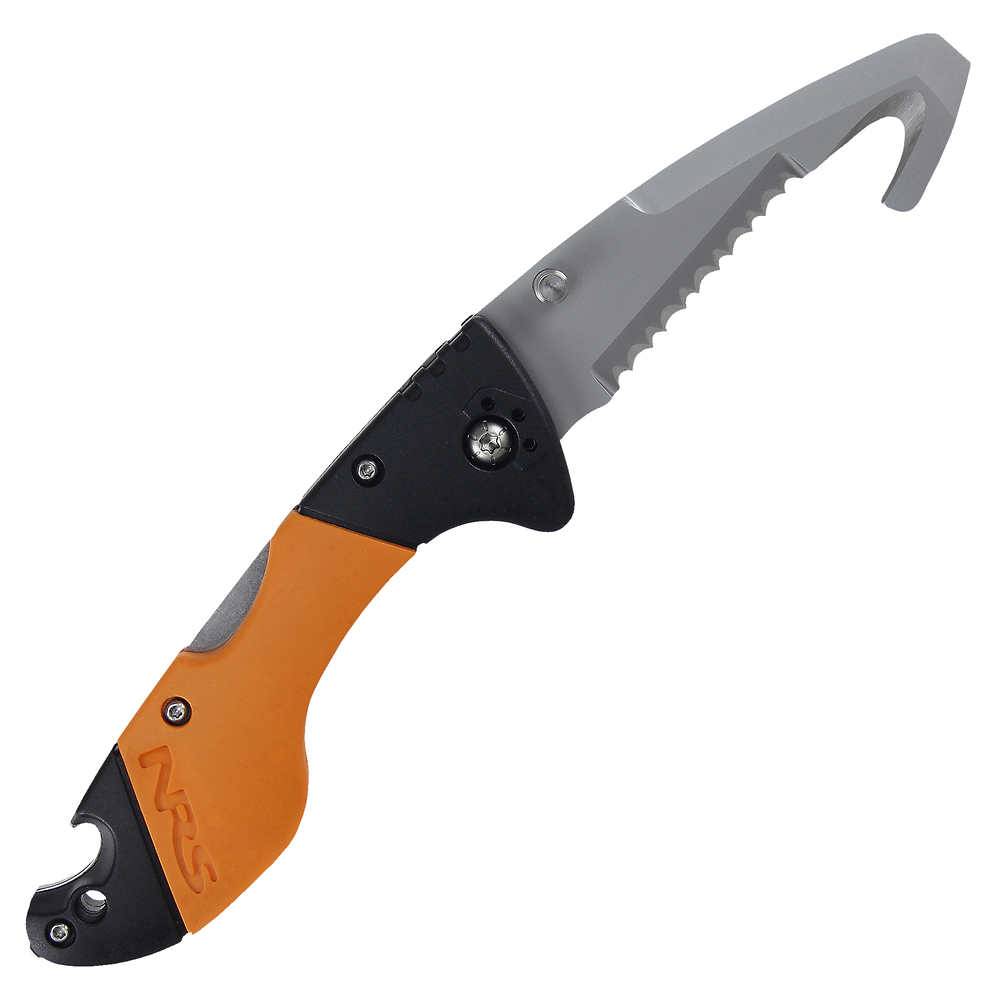 I started using a loop of leather shoelace years ago to keep track of the single key used on motorcycles. I loop it around a belt loop and drop the key in my front pocket…so the key is secure and accessible. Same for paddling knives or whistles or car keys. Not saying my system is best but it’s been working well for me for a long time. I think it’s more reliable than a carabiner! 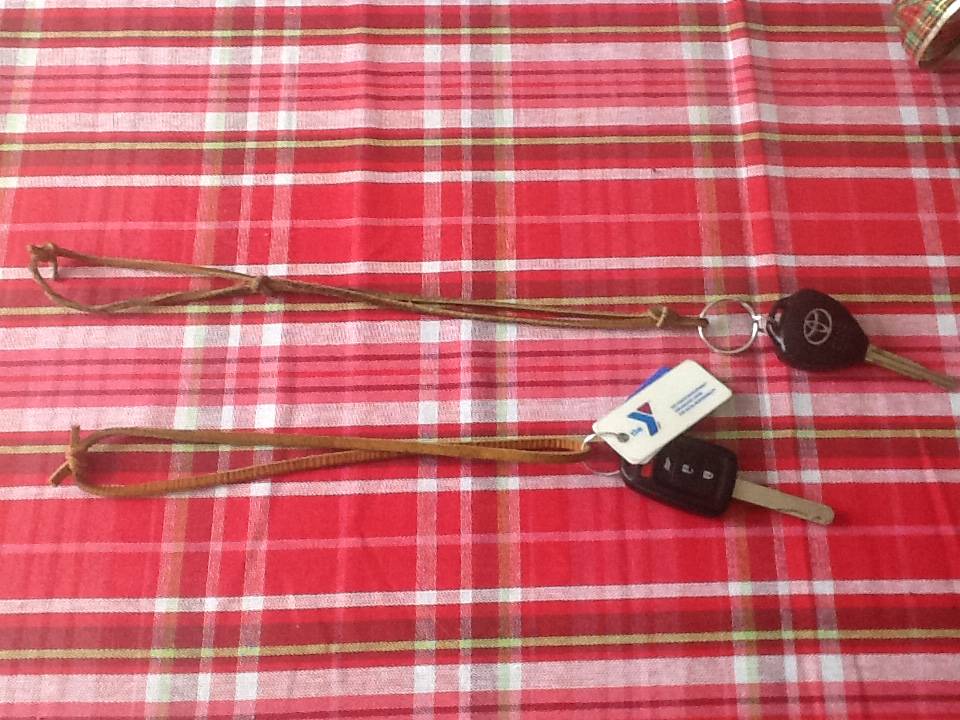 I wouldn’t use leather in a kayak, but the basic principle is sound. For a knife or rescue hook, you need more lanyard length; 3’ is probably enough if it’s attached to your PFD. You need to stash the bulk of it in a pocket so you don’t snag it during the normal course of paddling.

Well paddledog let me be the first to say I actually like your lanyards. I like the personal/artistic touch and the colors/patterns can help you remember which knife you are grabbing. But I need to confess that I’m just a canoe guy that sometimes carries a knife on a belt clip even when I’m paddling. 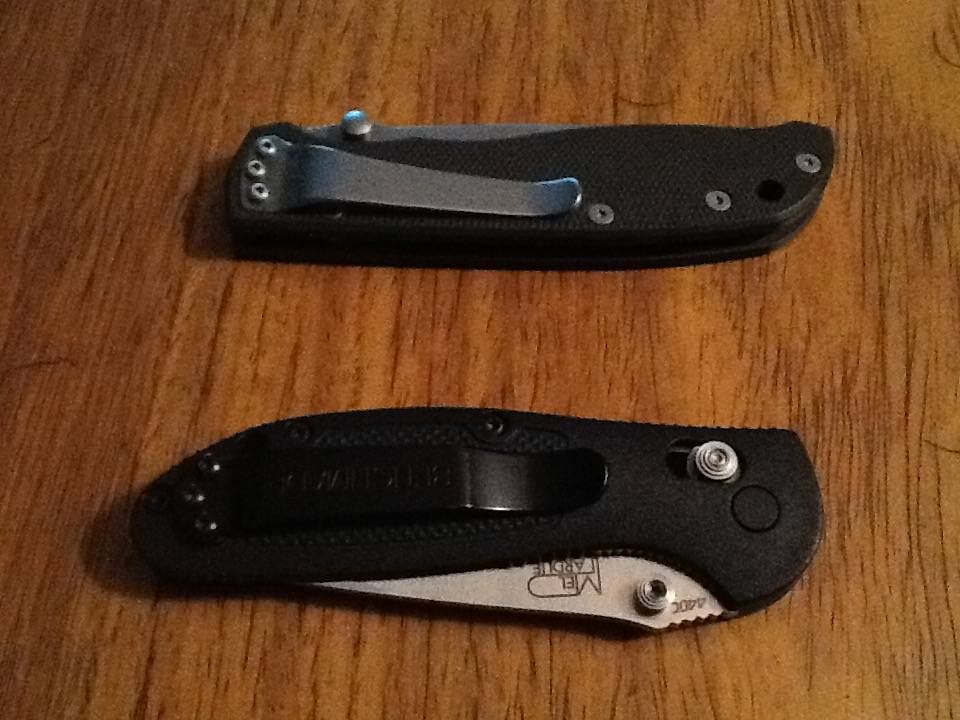 @TomL said:
Well paddledog let me be the first to say I actually like your lanyards. I like the personal/artistic touch and the colors/patterns can help you remember which knife you are grabbing. But I need to confess that I’m just a canoe guy that sometimes carries a knife on a belt clip even when I’m paddling. 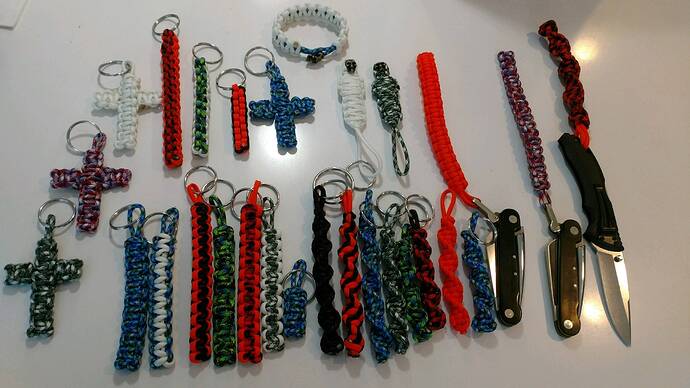 Went to paddle party and passed them around only came with the real short one and the ones on my knives. Party favors.
I don’t make them my great partner does. She likes making them I just buy the materials. USA made Paracord and USA made stainless rings. Good for keys or fobs.