has any one had a problem w/SOLAS reflective tape delaminating?

I had put some SOLAS tape on my previous kayak. At some point, I found that the clear layer on top of the reflective part of the tape was starting to peel off. This seemed to mostly occur near the front-most part of the tape and I had assumed it was happening while my kayak was on top of my truck with a steady 65mph wind catching the tape’s edge and trying to peel it back. I didn’t think too much about it as my kayak was a bit older and had plenty of scratches, scrapes and other cosmetic imperfections. With my new kayak however, which is still pretty pristine looking, although I’m inclined to put some tape on it, I’m a bit hesitant to do anything that would mar it’s appearance (like delaminating tape). Just wondering if others have experienced this also and if there are any fixes (including preventive). The tape itself seems pretty tenacious so I don’t know if removing old delaminating tape and applying new tape (or just leaving off) is an option. I would guess that the tape, if you could get it off at all, would leave a residue that would need some sort of solvent to remove which might itself mar the gelcoat.

Yes, I have had tape delaminate. Not sure it is the abrasion from air passing over it. More figured the route cause was moisture getting between the layers. Happens over time, so you should get a while out of your tape before it starts looking bad.

I would still install it, but I am less worried about cosmetics as I am safety.

If you decide to remove the tape to replace it, I’ve found WD40 works well on tape residue and other stuff and does nothing to gelcoat.

Some of mine has peeled clear layer. Still looks ok and works. Easy to get off fairly easy gel or poly. Have some that seemed to last longer but no idea if it has to do with exposure time or brand I think I try to buy 3M all the time.

I have no delamination issues with the SOLAS I put on my paddle, but I’m removing it because prism tape is much more reflective during the day. SOLAS is great at night; not so much in direct sunlight. For the rare occasion I might paddle at night, I have a stern light and headlamp

I use my hair dryer to remove the SOLAS. Time and patience. Will try Seadddict’s tip about WD40 on the residue.

I haven’t used or seen Prism tape before. Does it compare less favorably to SOLAS tape at night (I think you implied that but want to make sure). Is this the kind of thing you’re talking about? findtape.com/Reflexite-M82-SOLAS-Marine-Prismatic-Reflective-Tape/p712/?vid=7637&bc=F&c=US&gclid=Cj0KCQiAuP7UBRDiARIsAFpxiRL2ePNU6_aLr23U4Afl3QCU5FtRDZ5OCaffsQR6A8IzHCqiE9fLugsaAkUbEALw_wcB. The description says “reflecting high-intensity directed light.” Trying to figure out how it works in the day time. Is it just that it reflects the sun when struck at a particular angle, kind of like an emergency signal mirror permanently affixed to your hull?

“SOLAS always refers to a tape that is grey in daylight and a bright white when reflecting.”

I prefer something sparkly and reflective in daylight, not plain grey. So I added Duck Prism holographic strips to my paddle: Plan to add another set of prism strips once I get the SOLAS off (which was added after that photo). 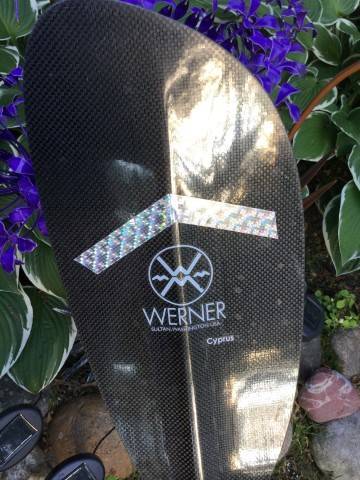 Night is a different story. I have a package of SOLAS; just need to figure out best placement on my kayak.

Rookie - put the SOLAS tape where it’ll define the dimensions of your kayak to oncoming boats. One on each side near the bow, another set on each side near the stern. You can put it midships but that is an area where it seems most likely to get scuffed up. That said, if you want to account for the boat being upside down the omly reliable spot is going to be below the seam in the middle on each side. Since pointy boat ends tend to be under water at that relationship to the earth’s plane.

Monkeyhead - Over enough exposure to salt, air you name it some of the SOLAS tape on my old boats is looking pretty ragged. But as someone said above, it can take a long time for it to become useless at its primary job. It just gets to where it looks less nice. If you want to replace it, the same degunking stuff I keep around that’ll take off glue from car registration stickers should also take off any SOLAS residue that doesn’t pull right up. Just maybe use more than for a car sticker.

I can suggest the reflective 3M backing that I print The River Connection stickers on as lasting 12+ years on the Thule fairing on my SUV. Drop me a line if you want one.

This all does remind me of searching for an answer to the reflectivity quest after getting nowhere with some paddle reps.

Anyone tried Albedo 100 paint (aka Volvo Life Paint)? I’m very tempted to get some to try out. Considering what SOLAS tape goes for by the foot a spray can for $20 doesn’t seem too bad.

After spending 15 minutes tonight trying to remove SOLAS strips from my Cyprus blades, figured there had to be a better way. The hair dryer gets the blade too warm with the dryer continually blasting. So I took my paddle to my kitchen sink, ran the hot water at a trickle on the SOLAS for a couple of minutes, then started pulling it off keeping the tape under the water stream. Much, much easier. I had three strips of SOLAS to remove; two came off under the hot water stream pretty much intact. Followed up with Seadddict’s suggestion of using WD40 to remove the residue and that worked quite nicely. Thanks, Seadddict!

Washed the blades with Dawn dish soap to remove the WD40 residue and followed up with a coat of Klasse. Smooth and shiny. Maybe that will make them go faster.

3m solas is made in multiple layers that come apart in the elements. I have tried it in the past but I now use Oralite SOLAS because it is made in one layer and does not come apart. Plus its several times brighter. I got mine at https://www.tapedealer.com . Good luck. Stan

I have some multi layer reflective tape that’s ~ 3 years old and recently had to be replaced. I just scraped it off with a putty knife and cleaned the residue/goo off with denatured alcohol. Also Lacquer thinner works for more stubborn adhesives.

I get all my reflective tape from AliExpress.com. I got 60 ft of tape for less than $20 shipped. The catch is that since it comes from china it takes 2-4 weeks to arrive, but it sure beats $10/5ft of branded tape. Based on a couple experiences, I would recommend tape that has a square design in the reflection, as these tapes are more reflective from more directions than non-square-pattern types.

If you want to make anything waterproof and quite durable, stick a layer of clear Gorilla Tape over it with a decent margin (say 1/2" or so) of the Gorilla Tape adhered directly to the application surface.

I do this with stick-on aquarium thermometers on my paddle blade so I can tell what the water temperature is at any time. The lowest I’ve been able to find only goes down to 10°C. Anything that doesn’t register on the low end is “COLD” and I’m likely already wearing insulation and immersion protection!