Has anyone tried those circular sails for kayaks

There’s a bunch of different ones but they all look more or less Like this one. Do they work OK, or more a waste of space?

I did and it was NOT great. For more context I tried them on my eddyline Merlin. I think a super wide rec or SOT kayak would maybe fare better.

It was not easy to control and I almost capsized because part of it fell into the water and started becoming a sea anchor.

You need a big area of open water with constant wind in one direction (that you want to go). Boat with skeg a big plus. A novelty, can not depend on it at all.

The parachute design ones were not something I’d want to try again. The one I used briefly had a control line that went around my body interfering with any paddle stroke. I gave up on this style fast.

Get a real kayak sail like the SeaDog Commander 0.8sq.m, Falcon or at least the Pacific Action sails that have masts.

I have 2 Windpaddle ones in storage somewhere and never use them.

It is nice how they easily attach to a boat without any modification needed. An when retracted, it folds down flat out of the way.

But you do need a strong tailwind. They only go downwind. And a light wind doesn’t work, as the sailing :apparent wind: hits you. If you have a 5 knot wind, and you are traveling 3 knots, the boat only sees a 2 knot wind (so it thinks it is calm). Probably want 10+ knots, but his is also strong enough to make waves.

Hard to control. Even harder if your boat doesn’t have a rudder as you need to use your paddle as a rudder, while also holding lines to control the parachute sail up.

This one worked great. She moved fast, but my arms would get tired. 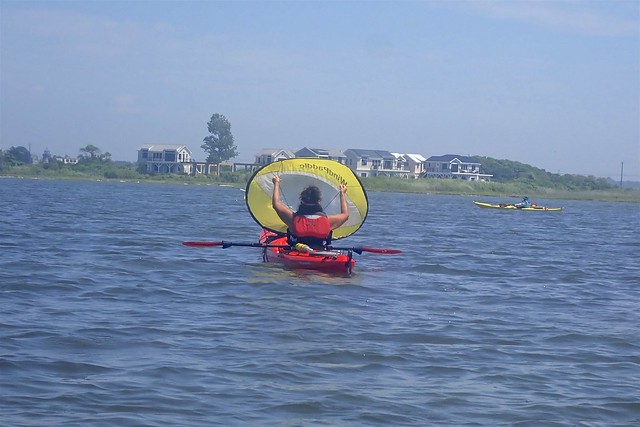 My wife has one, but hasn’t used it in a long time. As others have pointed out only works downwind with a decent wind. Requires a boat with a rudder.

They are popular on Paddle Florida’s Keys Challenge, usually held in January, where the prevailing winds tend to be pretty steadily behind you.

That sure would suck since it isn’t a standard airfoil sail that allows to sail across the direction of the wind. It just helps when wind comes from behind you.

Must have been thousands of years ago when sailing technology made this “bag” obsolete. You could just bring a towel and use as a sail.

Well, if I really wanted to sail I’d be doing that rather than paddling. Just thought it might be fun to try it out if the wind was more-or-less behind me. Some people have used umbrellas, so I hear, but it seems like you would generally want a downwind sail to be pulling your boat from the front rather than from amidships (as I don’t have a keel, leeboard, rudder, or even a skeg).

I can zero feather my Ikelos and feel it pull me.