Have any of you tried mounting a small electric motor in place of your rudder?

I have an extra kayak (Eclipse). The rudder has been snapped off, but the mount and cables are fine.

I’ve been considering mounting a small electric trolling motor with the handle/tiller cut down in place of a new rudder.

Steering is already taken care of by the existing rudder pedals.

Throttle control would be via a heavily insulated wire run along the side of the kayak and would take the form of a twist knob somewhere in the cockpit.

Here are my concerns:

Having a 50 pound battery in the rear storage compartment of the kayak and a ~20 pound motor on the stern seems like it could throw off weight distribution. The battery would be removable for transport if that wasn’t obvious.

I’ve also thought of implementing the same thing using a very small gasoline powered outboard. This would get around the heavy battery, but throttle control would be more difficult to implement.

My Other Gas Concerns:

Too much power. Even a 2hp outboard can get my old aluminum dinghy on plane. The kayak is much lighter, so even the smallest outboard probably has enough power to reach planing speeds. Kayaks aren’t meant to plane, so I don’t know what will happen at that speed.

I can picture a kayak moving faster than it was meant to go and a sudden turn causing a roll over. I think it is not a good idea.

In many states, once you put a motor on the kayak it must be registered (just like a boat) with registration numbers affixed to the bow. Check out your state boating laws.

Uh, “steering” is not the purpose of a rudder so I’m not clear on what you mean by the pedals still working. I agree with Oldboo on this not being a good idea. If you want a kayak like craft that you can use an electric trolling motor with, the Mad River Adventure 14 and 16 plastic canoes come with a snubbed stern set up to mount one. They are heavier and wider than most kayaks with a different keel and can be safely controlled under the force of the motor. They are frequently available used – I picked one up years ago for $400.

I know steering isn’t the purpose of a traditional rudder, but the rudder mount and pedal system will provide the ability to direct the thrust from the motor. It wouldn’t be at all like traditional kayaking, but it seems like you could maneuver. The same concept works with bow/stern thrusters on larger boats.

I have no desire for an additional kayak, I just thought it could be a cool project with this one since it’s just sitting right now.

Do you think keeping the motor in a fixed position and controlling the boat with the paddle would be a better idea?

I live in a rural area and am family friends with the sheriff. We have lax laws and he’s lax about enforcing them.

I’ve gotten kayaks up to about 10 knots with a sail before and it worked okay downwind, but I admittedly didn’t try to turn with the sail out.

Before you start chopping up a standard trolling motor, check out Torqeedo. They have a model specifically designed to fit on the rudder mount of a kayak. OK, it’s not cheap, but all the worrisome design work seems to have been done. If you can’t afford it, maybe you can steal some ideas from their pictures.
And no, I have no experience with one…

You don’t have game wardens there? They would be the ones most likely to fine an unregistered boat.

I’m going to give you the opposite advice as most here are giving you and they are likely correct.

You have an idea and a passion about trying something DIY with a kayak you really don’t have a use for. I say go for it. I don’t know how well it will work but I don’t think you are in danger of killing yourself in the process and it sounds like something fun to try and something I could have seen myself trying 40 years ago.

I see they sell some kind of prop you can chuck in a cordless electric drill to use for some extra push on a small paddle boat. Maybe start with something like that, I have a 3’ long paint and drywall compound mixer I bet would work.

If I was to try something crazy I would build a smaller version of a jet ski pump to propel a paddle boat.

I don’t see anything wrong with doing what he wants. I do not advise using it without registering the kayak.

Yep laws are laws. If he is going to use it on his parent’s private farm pond he might be ok. Once you get a fine it has a way of getting a person to figure it out.

In Pa we have to have a launch permit without it you can paddle all you want but when it comes time to get out you need to drag it up some farmers bank. People hang around the ramps making sure the coast is clear and then use the ramp. I pay every other year so I don’t have to do that.

If you do manage to gear this up. Please, please, please post a video. As much as I can picture the outcome in my head I so badly want to see it.

So I’m not the only one picturing a capsize?

I would think part of the issue with a kayak being converted to a craft with rear propulsion is that the hulls are designed to be propelled from the middle of the boat. And most of us know what happens with a tandem canoe or kayak if we try to paddle solo from the rear seat without ballasting the bow. Might take considerable trial and error to get the thing to track rather than veering or circling itself (or wanting to capsize.) obviously would depend a great deal on the hull cross section.

This dude clamped his to the cockpit: 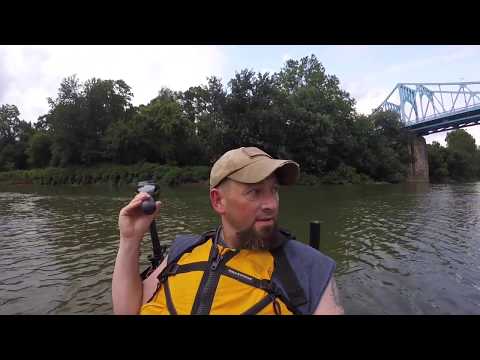