This may be especially answerable by those who have been kayaking for decades. I’m wondering how kayaks have changed, if they have, over the last 30 years or so. Obviously the sport has exploded. When I started (about 28 years ago if my math is right), it was kind of exciting to see another kayak on the water. Now it’s pretty common, and it seems like half of all car commercials or commercials about retirement investing and so on feature a kayak. Sit-on-tops are a huge thing now and there are more niche kayaks (e.g., for playing in surf and so on). And of course Greenland style paddles and techniques have become pretty big. But for basic touring kayaks, I am curious if design philosophy, materials, strength-weight ratios, safety features, or whatever have changed in a way that makes the average top shelf kayak from today different (superior) to the average top shelf kayak from back in the day. It seems to me as if classic boats, like the Romany or Explorer for example, are still competing successfully with newer models so maybe the answer is no? But there are more and more new models every year and many older models get retired. Does this mostly reflect newer manufacturers wanting to get in on the action and coming out with me-too boats, and decisions from existing manufacturers that have more to do with marketing, cost-of-production, or whatever than overall quality and on-water performance? On my first boat (WS Sealution II), there were padeyes rather than recessed fittings which seems like the norm now, but maybe it was back then too. I like the small day hatches that some manufacturers are putting in front of the cockpit. Can’t think of much else.

Similarly, I wonder if technique has evolved (i.e., what gets taught). I suspect this may be especially true of rescues. Also, someone said on another thread in response to something I posted about shoulder injuries that a lot of coaches have really de-emphasized or don’t even teach high braces anymore (sounds hard to believe) and that the emphasis has shifted to low braces.

I’m not much of a tourer, but on the whitewater end of things, the changes are dramatic for both training and kayak design/materials. The result was widespread growth in the sport and folks are routinely running things that were once considered cutting edge. Perhaps the biggest difference is how much safer the new kayaks are. The plastic is stronger, walls are better constructed, cockpits are larger, grab loops are reinforced, drain plugs help remove unwanted water and the ends of the boats are rounded to help prevent pinning.

Meanwhile ww courses be it on a river or artificial, and predictable daily flows made ww paddling into an actual sport, where athletes can hone their technique by running and practicing the same stretches of water over and over again. You can get video feedback from coaches and check water levels online so technology can play a role as well.

Nothing wrong with old school, but the seats aren’t as comfortable, the outfitting was lacking (no racheting back bands, pegs instead of bulkheads), and on water performance was less specialized. I Still own a perception mirage-I just don’t drag it out much, better boats to use most of the time for what I want to do.

All that bein’ said, there’s some great local paddlers who paddle old school boats, wear high float jackets, seda helmets, and use norris paddles. It ain’t the boat that makes the biggest difference, it is the paddler.

The surfski has changed a lot.

Well, for WW boats and surf skis at least. But how much has changed for touring boats over the last 30 years or so (the original question)? I really enjoyed the video though and the informative and thorough response by tdaniel.

I love that video!

I think anytime there is a competitive component you get advancement. In the case of the Kayaks, yes, there has been increibly advancement: 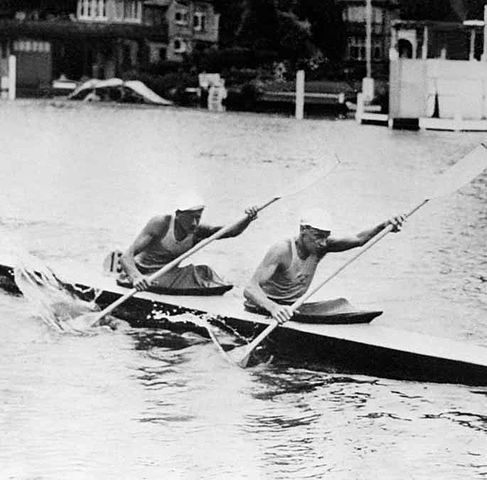 Other than material, I don’t think touring designs have changed that much.

Sea kayak designs have gotten a LOT less quirky, more computer-aided hull design and less experimentation by hand. So the sweet but takes-a-paddler boats like the old P&H Sirius get replaced by the current Cetus series, computer designed hulls. Other companies have gone the same way, but P&H is probably the best single example of the change in design goals…

The switch to emphasis on the low brace to avoid shoulder injury is not at all recent, first time I dealt with a coach coming from that point of view was over a decade ago. That said, at that point I was working mostly with BCU trained folks. My experiences with ACA coaches who came up from a mostly whitewater background have often been different. I have hit old hands from that side with more old-fashioned techniques, and frankly attitudes. There are a few grey-hairs left from that side of the aisle around here who are totally out of date on sea kayaks. They will tell people in a rolling class that all sea kayaks are harder to roll than any whitewater boat. I have seen more than one coach fail multiple times to get a paddler up in a creeker, with a Romany that would have them up in one maybe two sessions sitting pool side.

Materials are a bit lighter. Individual use dictates what compromises paddlers will make between weight and strength though, and the Hullivator is doing well because of that kind of balance.

There has been more emphasis on teaching a high angle approach for the forward stroke, but again that is since I first encountered a coach over a decade ago.

Overall marketing is to paddlers wanting less risk with their boats in favor of more head room for error.

The favoring of low brace over high brace was already common at least 15 years ago.

I guess I didn’t realize that as it’s been well over 15 years since I had bracing class, or a basics class that covered bracing.