Have you every worried about this happening?

When you are paddling beneath one of those big trees with roots exposed by erosion?

I should mention that this occurred on the day that there was an intense storm with high velocity, straight line winds that blew up very suddenly.

Never worried about that one. But lightning…

Yes, of sorts. Paddling down the Suwannee I looked up and there was a log hanging from a knob that got caught in the tree back when the water was 20ft higher. I reached up and hit it with the paddle. ………………………… It fell into the water next to the boat. I got splashed. But it was big enough to do bad things.

They aren’t called widow makers for nothing. In windy conditions , I say away from them , on land or water

Often impossible or at least difficult to avoid them on streams. The banks at the outside of bends are where erosion is most likely to erode and undercut tree roots. But that is also where most of the water goes and is often where the only passable channel is when the water is lowish.

I’m sure aware now given the record setting high water levels in Michigan. Not just rivers but inland lakes as well. This tree came down near the DNR public access to the lake I live on. Fortunately in the middle of the night. I heard the noise, and some animal yelp and initially thought something fell on the house, but as there was no wind went back to sleep. The lake had not come up around the base of that tree which is worrisome, as I have a big maple on the shore that does have water lapping at its base. 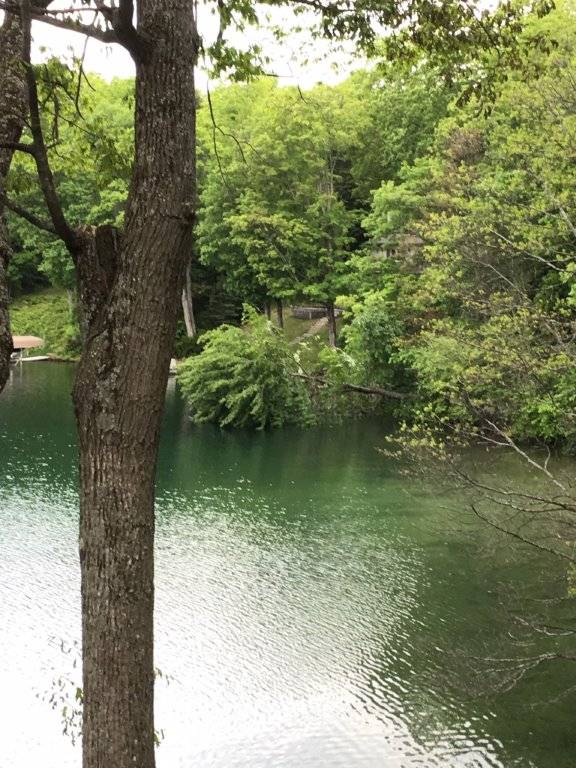 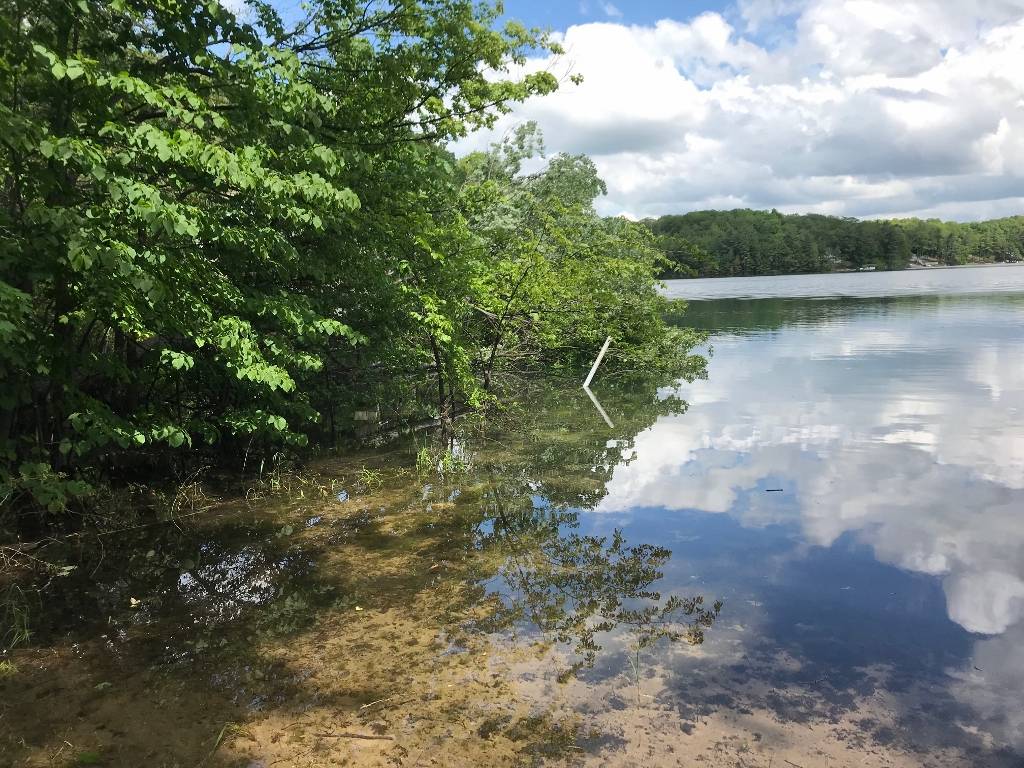 “Coroner Erik McSpadden said the man who was killed was from Van Buren, and was well liked.”

How is that relevant? I mean, I sympathize with the people who liked him, but it neither changes the outcome nor was it likely the cause.

I am more concerned for snakes falling out of trees than the trees themselves falling.

Friends had a large branch fall on their canoe when they had pulled off the river to portage a log jam. Missed them but damaged the canoe…

I’ve spent time on the bank under a canoe listening to branches crack when a thunderstorm popped up. I was in better shape though than the tubers.

I had a big tree limb fall and land 20-25 feet away from me one time on a dead calm day while walking the dog in the woods. It made me think about fate for a few days. But it’s not something I’d ever worry about and I paddle under trees like that often. 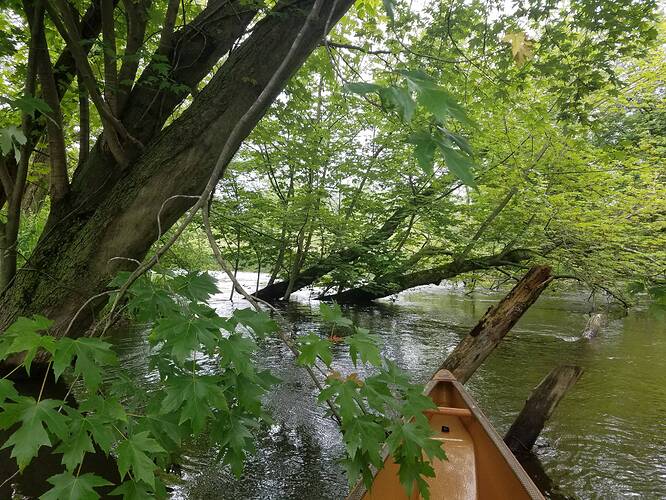 Trees can be very vindictive at times; they can never be entirely trusted. The ones who will commit suicide in order to take out a human are the worst. I think it’s something to do with their religion. Luckily, the vast majority of trees do not subscribe to that particular belief system, or we would be in a heck of a mess.

I have twice, while camped on river islands, had large trees fall down, perhaps a hundred feet from my tent. Oddly, on both occasions, there was little to no wind. Like rust, I guess termites and rot never sleep.

On a club trip last fall, on which I was not present, after the lunch break, a kayaker went into the woods to do her thing and emerged with a broken arm. It was a very windy day, and her arm was no match for a falling limb.

Back in the 00’s, we’d wrapped up a river trip and were running shuttle when a derecho came through. Driving back to the take out, we were impressed by the roadside damage the storm caused. Half a dozen people had stayed with the boats. They took shelter in nearby, abandoned and roofless structure, and were wet but unscathed, although one woman’s kayak was crushed by a fallen limb.

And, I occasionally read a news article about unfortunates who die after being struck by fallen limbs. If you pay attention walking in the woods, you often see fallen limbs implanted in the ground. The aerodynamics of a tree limb are like lawn dart–the meaty part of the limb leads the way down. It wouldn’t have to be a very large limb for a direct hit to kill.

So, I am aware of the dangers, but I’m not going to stay out of the woods. It’s like worrying about being a traffic fatality or a mass shooting victim. The risk is real, but small. Roll the dice.

In the woods or at home gravity pulls trees down. During Matthew an oak tree of 24" caliber fell on the patio and took out 15ft of gutter off the house. During Irma a very tall gum tree fell at the end of the lot. But the most damaging fall was on a quiet Sunday morning without a storm, cloud or contrary weather of any kind. A water oak fell and took out our shed and RV port.

The storm that hit the Current River area on the day of this particular event has been classified as a derecho.

I do listen for the sound of cracking wood with a tree that’s really leaning.

I was in the Boundary Waters a few years after the big derecho went through there (1999). Big? Huge. I can’t imagine the predicament of those who were there. If you survived injury in camp, how the heck would you get out. The portage trails would have been nothing but downed trees. The little derecho we had in 2012 was very impressive, none in my group will forget it, but it didn’t level millions of trees over hundreds of square miles, like the one in the BWCA.

This is copied from NOAA: “As the derecho raced into the Arrowhead region of northeast Minnesota during the early afternoon of July 4th, many casualties occurred despite the low population density of this heavily forested area. Because it was Independence Day weekend, many people had travelled to the Boundary Waters Canoe Area (BWCA) to enjoy canoeing and camping. Winds estimated at 80 to 100 mph moved rapidly through the area, causing serious damage to 600 square miles of forest in the Arrowhead region. Tens of millions of trees were blown down (Figures 3 and 4). Sixty people in the BWCA were injured by falling trees, some seriously. Twenty of those injured were rescued by float planes flying to lakes located in the forest near the victims.”

Sorry, off topic. Who got me started on derechos? Let me bring it back, a little. The 2012 derecho occurred at the conclusion of the same trip on which I witnessed a tree falling when the winds were dead calm.

Like Yanoer mentioned when you are outdoors you’ll usually hear a crack and have about one second to make a really good decision. The limb that fell near me was the size of a tree itself and I heard the crack and heard it crushing smaller limbs on the way down and had time to jump near the base of a big tree hoping my decision was good. We also lost bird feeders right outside our living room window TWICE during wind storms when a tree fell on them so now when the wind kicks up the dog is first to the basement. Also lost a deck behind the house when two trees fell on it. But none of that happened while paddling. B)

Trees just don’t fall down… Oh, wait a minute…
Just the other day in nice conditions at the entrance to our community.
Never thought about them but starting to now…

@TomL said:
Like Yanoer mentioned when you are outdoors you’ll usually hear a crack and have about one second to make a really good decision. The limb that fell near me was the size of a tree itself and I heard the crack and heard it crushing smaller limbs on the way down and had time to jump near the base of a big tree hoping my decision was good. We also lost bird feeders right outside our living room window TWICE during wind storms when a tree fell on them so now when the wind kicks up the dog is first to the basement. Also lost a deck behind the house when two trees fell on it. But none of that happened while paddling. B)

The natural, and usually correct instinct of GIs under artillery fire in WWII was to flatten out on the ground (if they did not have foxholes) and this was the best option because contact fuses that detonated on impact caused the explosion and shrapnel to direct upward and outward.

But under artillery fire in the wooded areas of the Hurtgen forest or Bastogne, the Germans used timed fuses to create tree bursts. The exploding shells blew the tops of the trees off and explosive force was directed downward causing many large “splinters” to rain down on the GIs. The men quickly learned that the safest course of action was to “hug a tree”.

She was not a paddler, but I just learned of this sad news today. An eleven year old Girl Scout was killed and several others injured when an “uprooted tree” suddenly fell on them while hiking at a Scout camp not far from where I live: