Hello,
I have been paddling this stitch and glue kayak for years. I have no idea what type of kayak it is, but I’ve not seen one quite like it. The ocean cockpit is set well aft. It has a very bold, hard chine and a looong graceful bow. It’s a fun and fast paddle, about 17 feet long. No hatches, no bulkheads. I can imagine it was home-built from plans, but it’s not a Chesapeake or a Pygmy. Any thoughts? 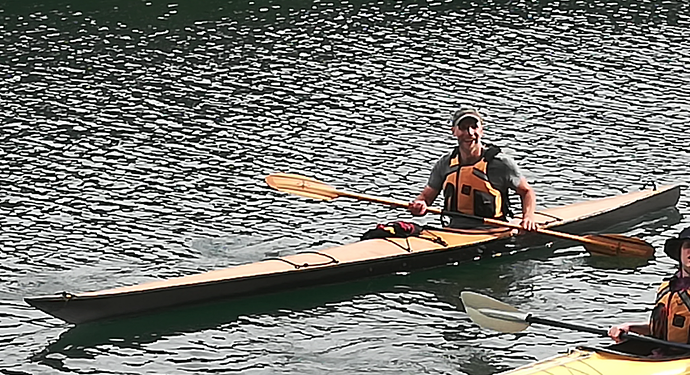 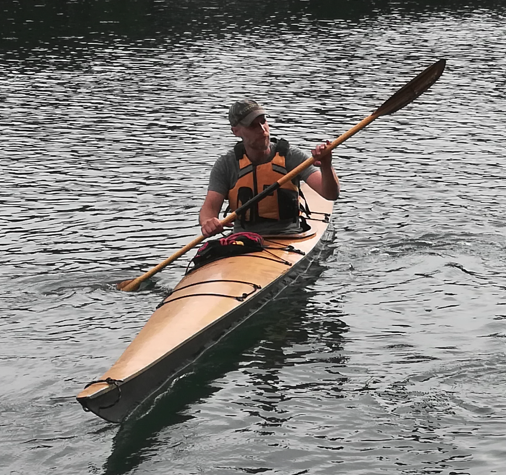 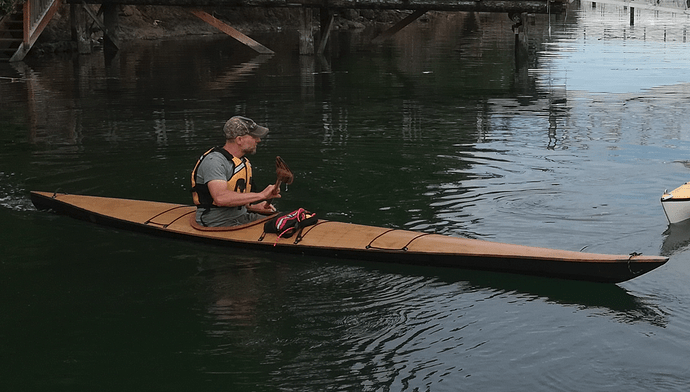 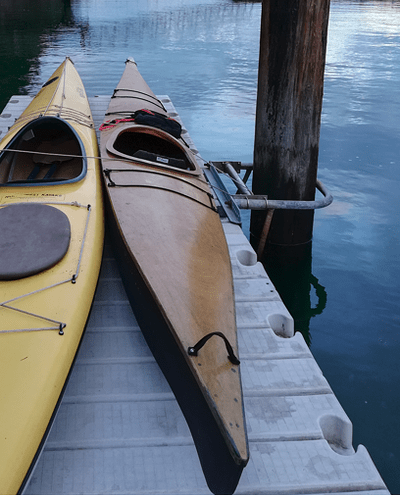 Wondered if it might be from the Guillemot free stitch and glue plan but their bow decks are more upswept.

Maybe a Seguin from plans from the Wooden Boat Store? Profile looks closer, though your stern is more plumb than this.

Noah’s is the only one that comes to mind without a keyhole cockpit or front hatch, but it doesn’t appear that they have a model that looks like

Its hull ends looks similar to a Great Faux, Guillimont Kayaks. Except the hull deck just forward of cockpit doesn’t rise up enough.
.
An “ocean cockpit” is often round. This one is a relaxed key hole with the thigh braces removed.

In reality home built means you don’t have to follow the plans exactly. It could be many.

That is a very nice looking kayak. Looks like it is fun to paddle too.

Yes. Good good looking, wish I could fit a trim boat like that. I envy the smaller guys and the women who can fit those thoroughbreds, but even when you so fit, you need the balance and skill to drive it.

Naturally I hoped someone would easily able to identify it. I suppose it is likely that some builder lifted some lines or revised some plans as they saw fit. The oddest feature to me is how far back the cockpit is. Also, despite the low prow it is prone to weathercocking and probably deserves a skeg.
I appreciate all the suggestions but I don’t see much similarity in the designs posted. I did learn a lot about what is out there in the world of plywood kayaks though! Thank you.

The tortured plywood deck says it is a CLC boat. It is probably the Chesapeake 17, though it might be John’s remake of the Guillemot Expedition. I’d have to see the chimes on the hull be make a determination.

The Chesapeake has a deeper central keel.

Yes, the arched deck secured with brass nails to an internal sheer clamp is characteristic of CLC boats as is the one-piece cockpit coaming top. Looks a little like a Patuxent 17 but I don’t think the forward stem of the Patuxent had quite as much lay out.

similar to the C-17…but the C-17 has more freeboard at the cockpit and straight bow slope…the one in the picture is different.

Years ago I found CLC, then saw Guillemont and Pygmy. Now it look the list is endless. I ruled out CLC because I thought all the long boats had bulkheads and hatches, with keyhole cockpits. 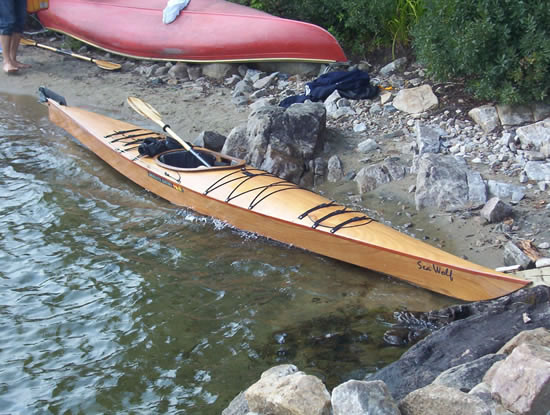 I truely feel bad saying this, but before the flamingo is retired, I think I found a trio of PFDs for proper kayak attire. A penguin (in black and white - after 6 paddling), a duck (yellow - when you feel chipper) and flamingo (pink - casual festive wear). I don’t think I can post picture, probably for good reasons, and I don’t want to post until I verify if the set is USCG approved. On Amazon and under 6 bucks each. Please explore at your own risk.