Hi. I’m looking to get my son a canoe, as he’s getting into it with his Scouts troop. I figure if I buy one, he can practice and the troop will have one less to rent!
I want to get his something light as kids 14-17 will be portaging it. They need to be stae and carry good gear, so I have been looking at prospector style 16 feet or longer.
I found a guy selling his 2 canoes. A 16’and an 18’. Both are an orange color with metal gunwales and only say Kevlar 49 on them. Does anyone know what the make or model might be so I can determine suitability? The price he’s asking is very reasonable.
Ive tried attaching pics. Hopefully that worked. 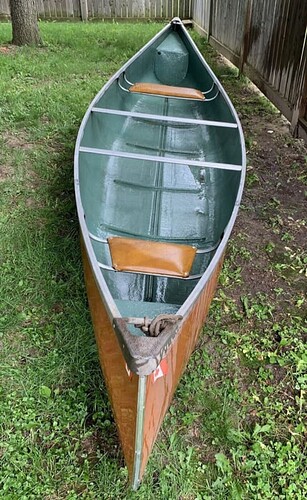 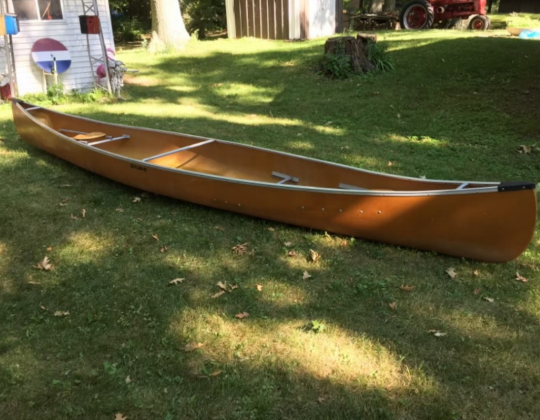 The inside of this first picture looks like an aluminum canoe even though the outside looks orange.

The second picture, although small, looks legit. I see footbrace in the stern W a tractor seat in the bow. Wenonah or maybe Sawyer. You would need to find the HIN to get info on the manufacture & build date.

For scouts, both could be fine.

I’ve read elsewhere that Kevlar 49 is just Dupont’s trademark for Kevlar, so that label doesn’t give you specific clues as to make or model. I have seen an older Wenonah kayak with the Kevlar 49 label so it could be Wenonah.

Any ideas from those specs, what the model might be?

I heard that wabash canoes are fast and narrow. But this guy is saying it is 36".

I’m hoping it is a stable boat, as it is being used by teens to go on portage trips over the summers. Gonna have 3 kids and kit…

I know that they did make racing canoes but I don’t know all of what else. Ted Bell owned Wabash Valley before he started Bell Canoes. Wabash Valley may well have made some Boundary Waters focused hulls. I don’t know if the folks at Northstar could help with history.

The Sundowner 18 and the Jensen 18 Wenonah’s had the Kevlar 49 on them.