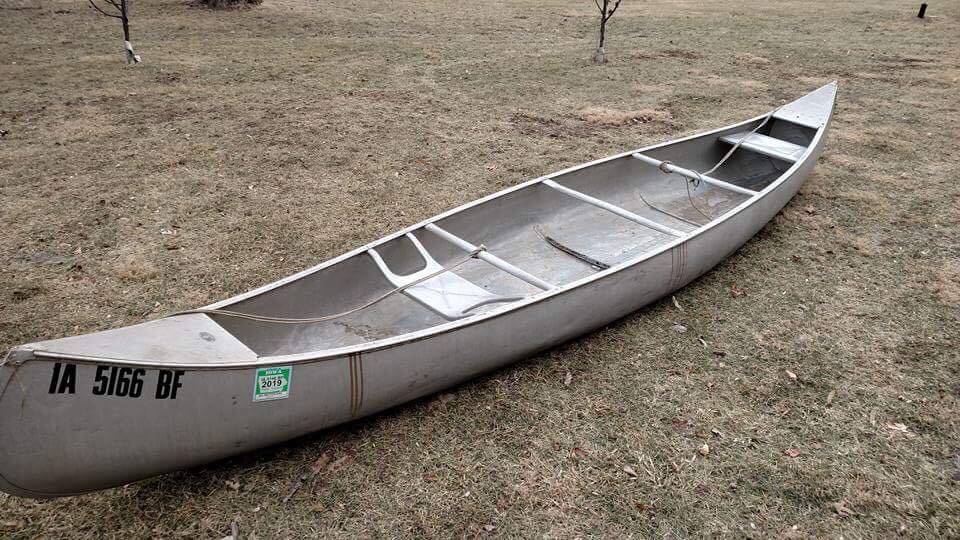 960×540 126 KB
and am trying to figure out how old it might be…there is no hull number, only the riveted manufacturing label.

I sent an e-mail to Marathon Boats but they said they can’t help me without a hull number.

It’s been too long since I’ve looked closely at a Grumman or any aluminum canoe, but my first guess is that the hull number is not alongside that builder’s plate where you found the model number as you might expect (I don’t know if that’s what you were thinking but it would be natural to). If you haven’t done it already, try looking along the gunwale near the stern, probably on the outside.

Not very scientific, but anecdotal.

I bought a similar looking 17’ lightweight Grumman for $125 as a college student in the early seventies. It was used and looked pretty much in the same condition as yours. The lightweight had more ribs in the hull to stiffen the thinner aluminum used. I can’t tell from the photo if yours is a lightweight. I sold it ten years later in the same condition after fairly hard use for $125. Yours could easily be fifty years old.

Age shouldn’t matter if you’re sweet on one another. I dated my first Grumman at age 16–And that was over 40 years ago! If I bumped into her again tomorrow(providing she hadn’t wrapped herself around any big rocks) if the price was right, I’d take her out again. Aluminum hides the wrinkles well!

The seats look like they are attached differently than the boats I paddled at Scout Camp every summer in the early 70s. It also does not look quite as rugged, so I am betting late 70s? Although the canoes were using could have been from the 50s.

Seats look just like those on my 1974 17 ft shoe keel Grumman. The HIN is riveted on the outside of the right stern, just under the gunnel.

Oh, maybe that’s it, that it pre-dates their use of hull ID numbers. I wonder how such things were standardized though, if at all, as I have a Mirro Craft jon boat that dates back to about 1965, and I always thought it had an ID number, but perhaps it doesn’t.

I know for certain that at some point in the early to mid 70s, Grumman canoes had modest blue-painted graphics on the hull, and I think for a while before that, just a simple logo on the bow. Graphics of that kind have only gotten more gawdy and obtrusive since those times. This boat clearly pre-dates the use of any such graphics, so my bet is that it’s from the 1960s or earlier.

Oh, while we’re at it, that name plate is definitely quite old, a style I haven’t seen even on the older Grummans I know. Now I’m definitely thinking 1960s or earlier, so I’d say 50 years old is the absolute minimum age of this boat. It could be 60 or 70. Pretty cool.

As to this boat “not looking as rugged” as some other version, I can’t imagine a way to tell the difference between a hull thickness of 0.040" and 0.050" just by looking at a photo! Pbenter (earlier post) indicates that the lighter versions had more ribs, but a recent Grumman brochure I looked at online says both versions of the standard model have three ribs (the shoe-keeled model had 7 ribs because it was “designed” for whitewater). So based on the number of ribs, it’s definitely a “standard” model, and for a very long time, the standard model was available in the two afore-mentioned hull thicknesses. However, today I believe the only option is 0.050", but even if the 0.040" option is still available, nothing about the older boats was more heavy-duty than the ones made today. Weighing the boat will tell you which hull thickness you have, as the heavier version weighs 75 pounds and the lighter version is 66 pounds.

I haven’t seen plaidpaddler on here since the board switched to the new format, but he’s our resident expert on such things. Maybe he’ll drop by.

Guideboatguy has most of it down since Kim reminded him that there are a lot of Grumman canoes that predate the use of the HIN numbers. This canoe is from between the late 50’s and early 70’s and it predates the HIN number. As far as construction, the standard Grumman had a hull thickness of 0.050" and a fin keel. the whitewater model had a shoe keel and 0.065" hull. There was also a thicker hull for Scout weight and livery canoes of 0.080" thickness. Later there was a lightweight model with a 0.040" hull and it is now the standard hull in a higher strength alloy.
Since the advent of the Marathon Canoe Co. and the limited volume of canoes they produce, many of the optional hull features have disappeared. it may be that they no longer have the volume to buy the different gauges of aluminum at a good price. Weighing it and looking at the keel will tell you which version you have. It matters little what year yours was made. It is a standard model and has none of the optional paint, either inside or outside. There were many paint jobs available over the years and starting in the 70’s, there were exterior graphics, some described above. The nice thing about Grumman not changing the hull shapes and dimensions is that you can get any of the parts needed for your old canoe today. Someone with more history with Grumman could have given you a year of production from the model designation and serial number. But sadly most of the those people are retired now and I am sure all that data never got put into their present computer system.

Some say she piled the Cedar’s rapid when Ike was a hold’n court.
Some say she floated the teenage vapid in their Camelot summers of sport.
All I know is she’s still good to carry as I course my own history.
Guess then I’ll, let the mystery be.

That looks just like my 17’ square back canoe except no square back. Mine is a 1974 and the HIN is where it should be, on the outside just below the gunwall on the right side in the back. Since you don’t have one, I think you might still be able to obtain the HIN. I see a 2019 registration sticker on it. That means it is currently registered in Iowa and you could make an iquiry with the IA DNR and see if they will check to see what HIN it was registered under. You are probably going to have to re-register it under your name anyway and will ask you for a HIN. If you can’t provide it, they will look up the registration number to cross reference it and you can get it then…if it was registered with a HIN by the previous owner.

Bambi,
I have one that looks like yours but, the crossbars look like a different position. I don’t know how long mine is never measured it. But, Dad always said it was 16ft. He bought it before my Mom and he got married. So, 1950-51. The gap between front seat and the bow looks longer on yours than mine. Check it out! 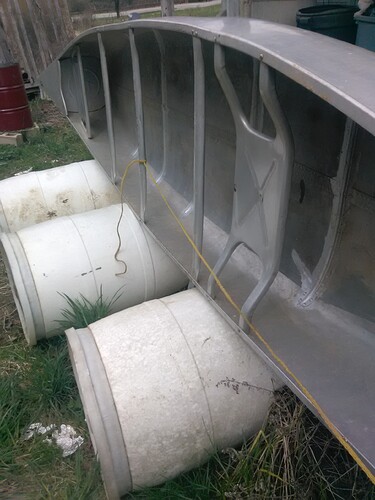 The Coast Guard made hull numbers mandatory in 1972, so somewhere between 1945 and there. My dad bought a Grumman 13’ light weight in the early 70’s. My memory is not great but I think the seats were similar.

Aircraft companies live and breath tracking: see if you can find a serial number somewhere like on the bow bulkhead.

Hi, just inherited this 15 footer…new to the canoe world…any ideas on age? Tried calling the Marathon place in NY, and no success…thanks and cheers!

Gruman canoes were made originally by the Grumman Aircraft company, but were sold to OMC which closed the factory very abruptly. It was then operated as Marathon canoes, and finally the canoes are once again called Grumman. Many of the original Grumman boat records did not survive thru the changes of ownership and the people who could decode the original model/serial numbers are long gone. Just rest assured your canoe is an original from before the existence of HIN numbers. and will last another 75 years with reasonable care. Grummans assembly methods were perfected making carrier based airplanes powered by radial engines, the toughest testbed for riveted aluminum construction.