I’m a bigger guy at 6’3, 250lbs, and I’d like something that I can load up with like 50-100lbs of camping gear and water. I live in central Virginia and paddle local lakes and rivers - mostly flat water but Class I rapids are common and my overnight trips will often include a Class II or two. My local rivers tend to run pretty shallow so I need something that will hold up to some dragging. I do a little fishing but nothing fancy, so I prioritize having something that’ll paddle with some speed and efficiency over a big ultra-stable working platform. But I’m a casual paddler, I don’t need a top speed performer or a III+ whitewater boat.

I started looking at kayaks because I love the experience of being low on the water in a small responsive boat, but I think I’ve settled on a pack/solo type canoe that feels a bit like a kayak but still gives me an open storage space and a lighter boat that’s easy to cartop. My budget is in the <$1500 range and I don’t anticipate doing much portaging, so I’m not really interested in shelling out extra cash for a super light boat.

I think I’ve narrowed down my search to the Old Town NEXT and the Esquif Adirondack, and would love to get input from folks with more experience.

I think I’m leaning NEXT - it’s already got the kayak seat and foot pegs, plus its longer hull tells me it may be a more efficient paddler on flat water. I know it’s heavy for its size but 60lbs isn’t a challenge for me to lift and I’m not really portaging. The big question that stands out to me is whether its flatter hull and lower profile will be able to handle the occasional Class II. Also, whether 13 feet is enough length to begin with for someone my size.

The Esquif Adirondack looks good too; it could be fun to customize it with a kayak seat and I’m sure I’d appreciate the lighter boat, but at 12’ long and wider than the NEXT, I’m worried it will be less efficient to paddle on the long flat stretches that dominate my local waterways. Both boats appear to meet my weight capacity needs, though it’s been a little tougher to track down exact capacity for the Adirondack so I’m not fully confident it’s up to the task of handling ~350lbs of person and gear.

Thanks in advance for any help! This forum has already been a huge help so far, hoping you fine folks can help me clear this last hurdle and settle on something great.

I’m a big guy as well, 6ft/300lbs. You will want a longer boat for your size and the amount of weight you want to carry. What I have done is convert a tandem into a solo by moving seats/thwart and pulling in the gunwale some.

My beater boat is an OT camper that had rotten seats at purchase. Replaced the seats with thwarts (1x3 house trim) and placed a sanded down 2x6 thwart in the middle for a seat. I have $300 in the boat. A 16ft OT penobscot would be a nice boat to convert. Alot of other options are out there as well.

I did something very similar to @zekabl in converting a shorter tandem to a solo. In my case I found a used OT Guide 147. I’m also a bigger guy and I wouldn’t want anything shorter than 14’7” with needing to haul some gear. I use a 260cm double blade paddle and carry a canoe paddle and telescoping poling pole as backups. I added a stadium seatback seat. I paid 150 for the canoe and maybe have another 100 plus a weekend of my time getting it where I like it. I added some extra floatation, grab loops and an anchor, rod holders etc for fishing. 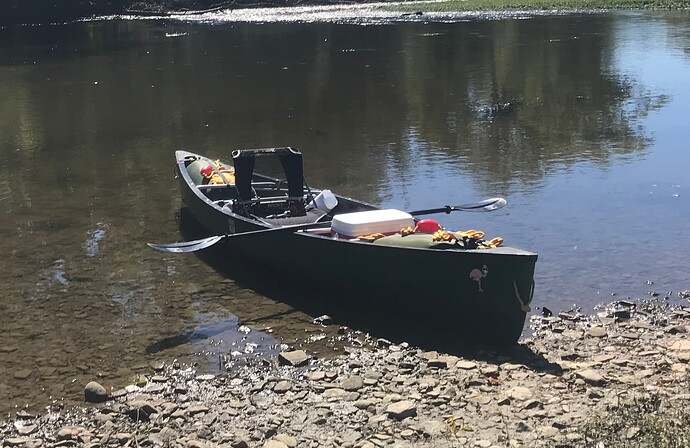 How heavy is that boat, and how do you find it in terms of loading it on/off the car? I’ve got a tandem right now that’s about 100lbs and it’s a pain in the ass to load, hoping to get something more manageable for solo trips.

Oh and also: what’s it like pulling in the gunwhales? Easy to do? Do I need the boat to be some specific material(s) to make that work?

That looks awesome. How do you find loading it on/off the car on your own?

I made a simple rig that makes loading and unloading a snap.

You can go from end to end and walk it up the steps, or what I normally do is stand between the canoe and the car and lift it a step at a time till it is about 2/3 up and then go outside the boat and push it up a step at a time and then on the roof. My rack is a DIY as are the ladders. I have about 30 bucks in the whole thing.

If i’m hauling two canoes I have extended racks I add on top to let them hang out wider than the rack. The ladders work from ether side and I normally pick a side and load both boats from the same side, sliding the first one over. 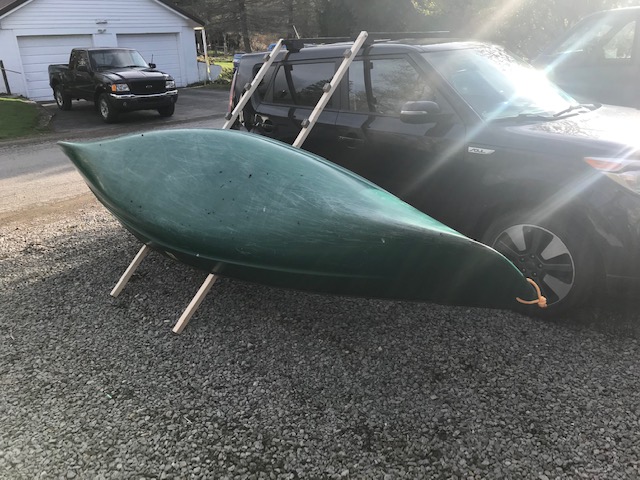 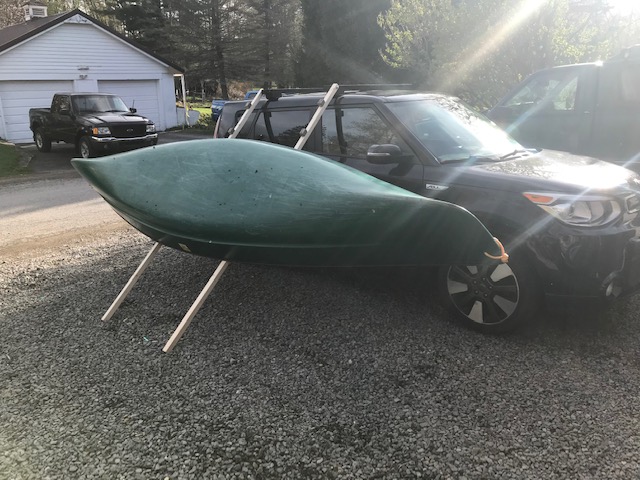 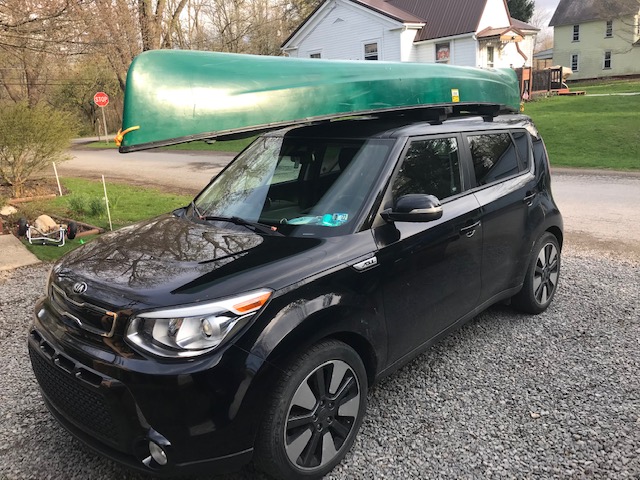 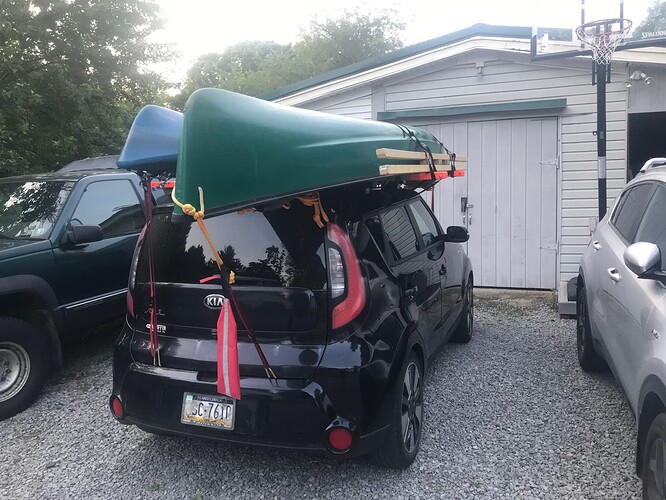 Here is a little more detail on the ladders. Made them from 2x2 and the top cross bar and the extension bars are 2x4. The ladders have blocks made from 2x2 and I later added a ramp to the blocks, they hook inside the upper gunwale starting up and then outside the lower gunwale to go up and over.
I hold them on with a long 3/8 bolt slipped thru the holes. 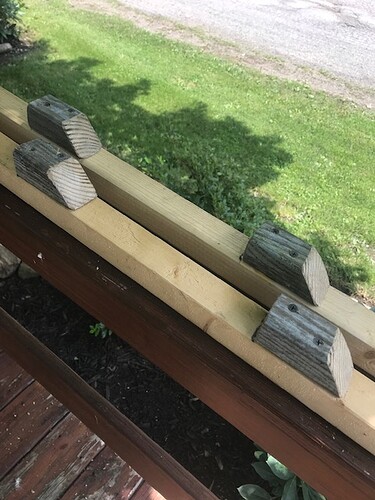 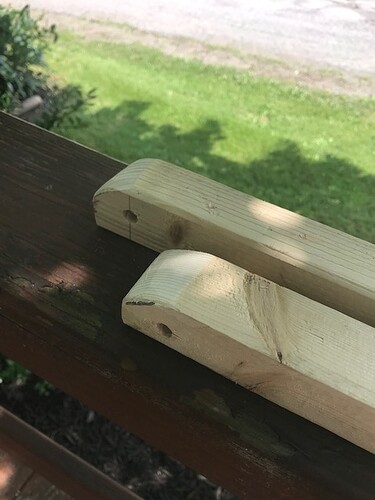 I didn’t pull in the gunwales much if any. Getting rid of those two heavy uncomfortable plastic seats was a good weight reduction as was getting rid of that oak carry yoke. I had some old aluminum tent poles I cut and made thwarts out of and added four back in. Two would have been enough but I wanted to define a cockpit area and two storage areas one in front of me and one behind. That way I can balance any gear to keep the boat level and the thwarts make a great way to lace gear down. The two triangles in the bow and stern are where I tie my air bags in. They are enough floatation to make it able to do a self reentry and not take on too much water that you can then bail it out or paddle out and then dump. I normally have my cooler in front of me great for fishing or getting food and drinks on the move.

It is kind of a DIY pack canoe and if I had the money I’m sure one of those that’s lighter would be on my wish list. The nice thing about the triple layer poly used cheap canoe is I don’t worry about beating it up in shallow water and rock bottoms. The disadvantage is weight and I found that’s solved with some dolly wheels and the loader.

I think the OT camper is right at 60lbs. I am only pulling in the gunwale about an inch or so. A long pipe clamp would work or have someone squeeze the boat while you fasten the thwarts or seat. I do use my boat as a tandem and you can see the rear seat in the photo along with my 2x6 center seat.

I know royalex boats are getting harder to find but they are out there. Buds Guide is probably poly link 3 and much heavier due to the material used in its construction. 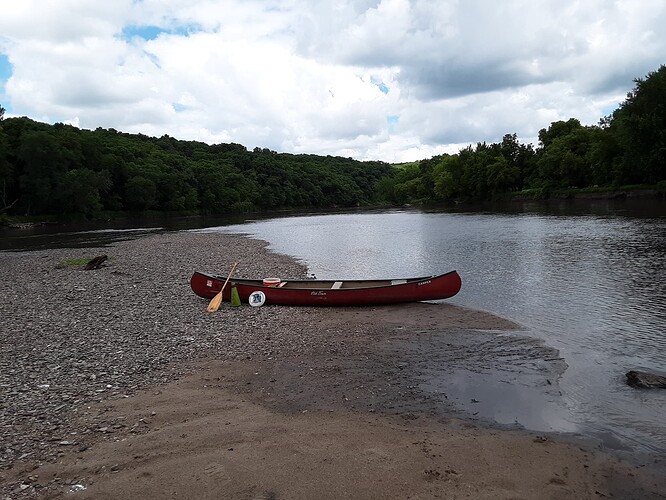 You’re in a tough spot - big guy, want an efficient boat, but don’t want to spend a lot of money. Next and the Adirondack look too small - especially if you plan to bring camping gear. You will probably end up converting a small tandem since that is what you will find used. Still, a lot of manufactures have touring boats set up as pack boats, so you might get lucky if you look - something like a RapidFire, or a Keewaydin. I have a couple of friends who paddle old Bell Magics (now Northstar) with double blade and love them. They would be a little more tender for fishing, but would be a lot more efficient to paddle.

Yes my Guide 147 is 3-layer poly and started life at about 82 lbs. The seats they put in were ridicules IMO. Heavy and hot black molded plastic that you can’t sit in backwards to even try and use it as a solo. I might add I felt they were also an inch or so higher than I wanted. Once I got rid of them it was a bit lighter and that weight gave me some room to work on adding stuff back in.

I think for me weight on the water and off the water are two different things. The off the water weight was my only issue and like the OP getting it on the car the biggest problem. The type of paddling I do is almost always once in the water it stays in until I’m done for the day and the cheep kayak dolly makes it easy to move around by myself and most of the time I have her 40 lb. rec-kayak on top and move both at once plus all our gear.

I agree pulling the gunwales in a little is a good idea if you plan on a single blade and in my case with 4 thwarts and a center seat support I could have cinched it in a fair amount. Not sure how that would change handling, but I do know changing the seat to the center made mine rock stable so I wouldn’t worry about a little loss in stability.

I went with what I could find used for not much money and the poly is heavier but the cost was less as a tradeoff. My honest assessment of the Guide 147 is it is not that great of a tandem canoe and is best for rental places and such. Converted I was quite surprised how much it changed and became what I needed.

I see quite a few fiberglass tandems for sale. They are probably the lighter option, and are often in the $200-400 range.

Hi, I am 80, now. I was 5’ 10" and about 180#. Have had a 17’9" Tripper for 35 years at least, pulled off a rock in the Millers. It has 3 cane seats, with the Mad River ash gunnels it weighs 80#, when younger, would just put on shoulders and go. The thing is all purpose, has run Contoocook at high water, double, no bags, and has a large carrying capacity on flatter water. They do still come up on CL.

Checking back in just in case someone finds this and I can be of help: I kept an eye on craigslist and ended up nabbing a 16’ Mad River Explorer in royalex.

I’ve only taken it out a few times now but I love it: it’s a great tandem boat, and plenty light (~70lbs) for me to carry around on my own, though I wouldn’t want to do an extended portage with it. It’s handled beautifully so far when I’m out solo, too. I may still keep an eye out for a little kayak-y thing down the road, but this is meeting all of my needs so far at a lower price than a new NEXT or Esquif Adirondack would have been.

That is a good boat to start with.

Too bad Royalex is no longer produced, for white water, there was nothing better, I can say that as I was part of building the first Kevlar canoe, got the material from DuPont lab, it is very light, but not as rugged. Keep patching your Royalex boats, they are ireplacable.