I purchased a cabin that came with a custom 16’ canoe from Hemlock Canoe Co–Birchwood, WI. It was built for a Ducks Unlimited banquet in Rice Lake WI. It has a large painted inscription on each side of the bow of canoe with the words “Ducks Unlimited Indian Head Chapter 1986”. It has the DU crest beneath the inscription. I learned from a member of this Chapter that this was a one of a kind model constructed for the Chapter as a fundraiser. Interestingly, this is not a hunting canoe–which I would have expected because the colors are green and gold. The canoe is in good shape. Any idea of the value of this canoe?

Top-of-the-Line
Well that is certainly a top of the line canoe even though it is 30 years old. Serial number would be helpful but I bet they probably only had one or two 16ft models back then. The experts will chime in soon to give great advice. I am guessing its worth around $1000-1400 but of course possibly more depending on how bad someone wants it! Its BIDDING time!

We need to know which model and
construction, weight, etc to give you a reasonable value for the canoe.

I’ve seen some “Hemlock” canoes advertised that don’t resemble what’s currently being built by Dave Curtis and I wouldn’t expect them to fetch a very high price, but I could be wrong.

Hemlock Canoe
I do have a serial number that is on the original sticker inside canoe–also identifies the individual who apparently built the canoe.

Hemlock Canoe is out

Of Hemlock NY and are lightweight composites made of Kevlar and carbon in some Layups by Dave Curtis
Are you sure the name is not of a canoe model by someone else ?
The Birchwood Hemlock did go out of business in 1991. Gus Moltzen may have died. Seems those were fiberglass boats.

Daves boats go used over $1500. Older glass boats much less. Markets differ but it would be three figures not four

Hemlock Canoe
Thanks for the responses! The canoe definitely came from Hemlock Canoe Co in Birchwood, WI. The DU Chapter it was donated to in 1986 is located in Rice Lake, WI–about 18 miles away. The canoe Serial number is TKFGM462K586. Capacity: 675#. I’m planning to put it on Craig’s List w/a photo. I just wanted some sense of value because I’m not knowledgable and want to price it fairly. Thanks for all the help folks.

Can you please tell me what the Hemlock Canoe sold for? I want to move mine down the road. Thanks! Paul

@Hammerman said:
Can you please tell me what the Hemlock Canoe sold for? I want to move mine down the road. Thanks! Paul

What model, materials, construction and condition? Weight? That information would help others guide you toward a potential market value. 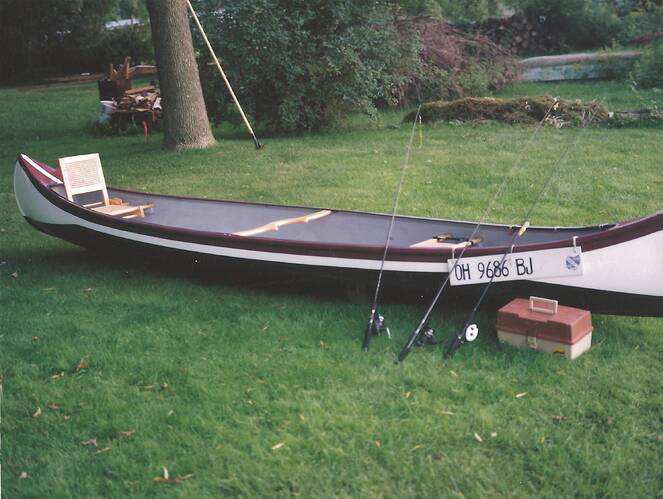 Gus Moltzan made the Hemlock Canoe in Birchwood, WI. I believe he sold the business somewhere around 2000? Mine is a 50 lb fiberglass “flatwater canoe” - as Gus called it, aka the “Supreme”. It sold for 550.00 in 1994. Love it! I keep it cherry, I made Gus sign it. He made a few tweaks to it as he built it - at my request. He may still be alive up there near Rice Lake. He’d be close to 90.

This canoe is not to be confused with the Hemlock Canoe Works in the Finger Lakes Region of upstate, NY.

That casting reel looks like an antique! Without the plastic tackle box and 90s-style spinning reels, this could pass for an old photo. On taking another look, the rod that apparently old reel is mounted on is pretty modern too. Maybe the reel’s not old at all.

I bought a Hemlock Supreme Birchwood Wisconsin on the decal but states Chippewa Falls on the HIN tag. It is named The Hemlock Canoe manufactured by Canoe Outfitters LLC. I Bought it last year for $600. It’s a 2003 model, 17 ft fiberglass. I added some wood strips to the gunnels for added support. 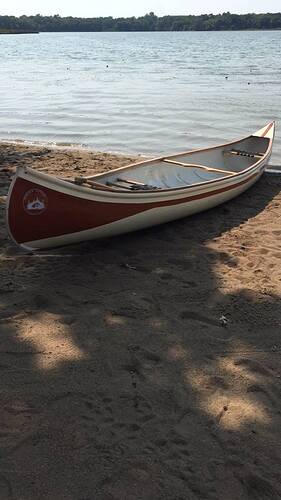 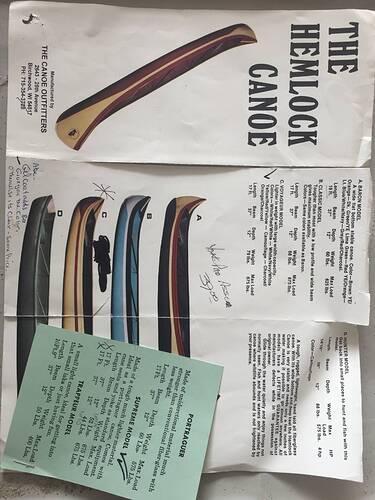 We had over 75 of these canoes in our rental livery during 20 years of operation. While not light, although comparable to aluminum) the canoes is very durable and we never had one fail (one even came off the canoe trailer at 65 mph and suffered only minor damage). Gus was a great guy and made a beautiful, relatively inexpensive canoe. A used one, in good looking shape should bring $400-$500. We were selling new ones in the late 1980s for about $350.

Contrary to public speculation, Gus (Gustaf) is still alive at 89 and resides where he built canoes - Birchwood WI.