Home of The Boys in the Boat

This may be a bit of a stretch in terms of what is appropriate for our forum and if it is out of line, I vote that we just delete it. There are definitely some paddles, or oars, involved so you be the judge. If it’s wrong I’m fine with it disappearing. 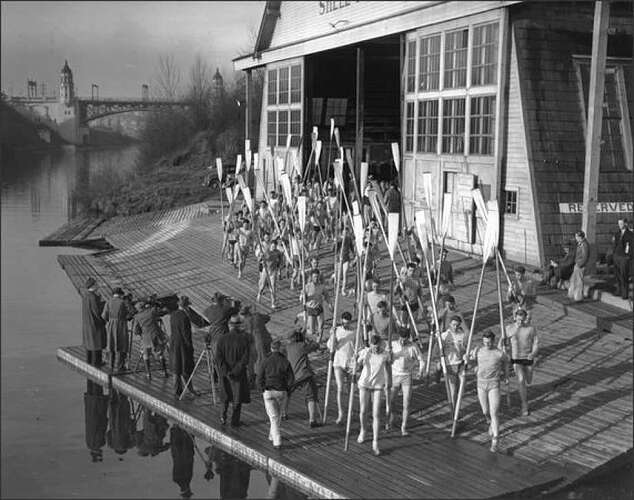 I came across this video this morning about the ASUW Shell House at the University of Washington where the “Boys in the Boat” got their start. It is of particular interest to me because I grew up just a few blocks away and was in there a lot when I was small. The Lake Washington Ship Canal that the Shell House is sited on is part of my territorial waters and over 60 – 65 years I have passed through it over a thousand times swimming, on wooden rafts, in a stolen concrete mixing tub, a collection of homebuilt rowboats, a homebuilt prone paddleboard in the ‘60’s, a small homebuilt hydroplane, a homebuilt runabout, a cabin cruiser, rented canoes, and every kayak I have ever built, owned or borrowed. As a kid, the Shell House was where we took the forged notes from our “Mothers” that gave us permission to rent canoes from the UW. It was really key to my development as the twisted senior citizen ocean boater that stands before you today.

I can always use a good “stretch.” But, seems, floating my boat, too, somewhat apropos for these parts, per loose definition.

Thanks, from one twisted senior, riparian in nature, to the pelagic kind. 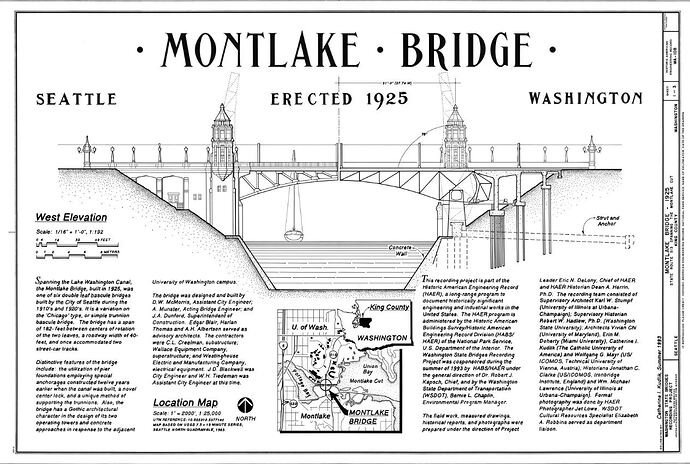 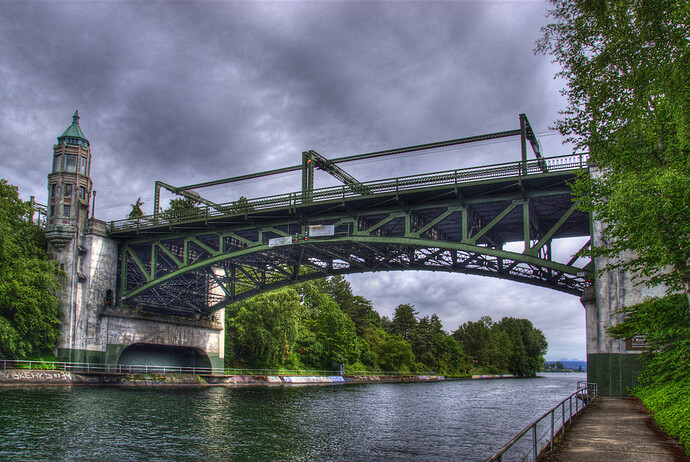 Wow! Thanks again. Great elevation plan view of this beautiful bridge. That’s some deadman running into the southerly bank! And I can see what I thought were further-distant vaulting towers are actually overhead superstructure of the two draw decks. Hope she still stands 'n spans.

The only thing we have here in Baltimore to approach this bridge’s beauty is the 1916 Hanover Street Bridge, though her towers aren’t as nicely adorned as Montlake’s, and her draw span betwixt the towers does not have an overhead superstructure. But, she does have many masonry arches and, on some sunny mornings, or foggy days, she emits a sort of classical oil panting of a Thames crossing or Seine River pont: 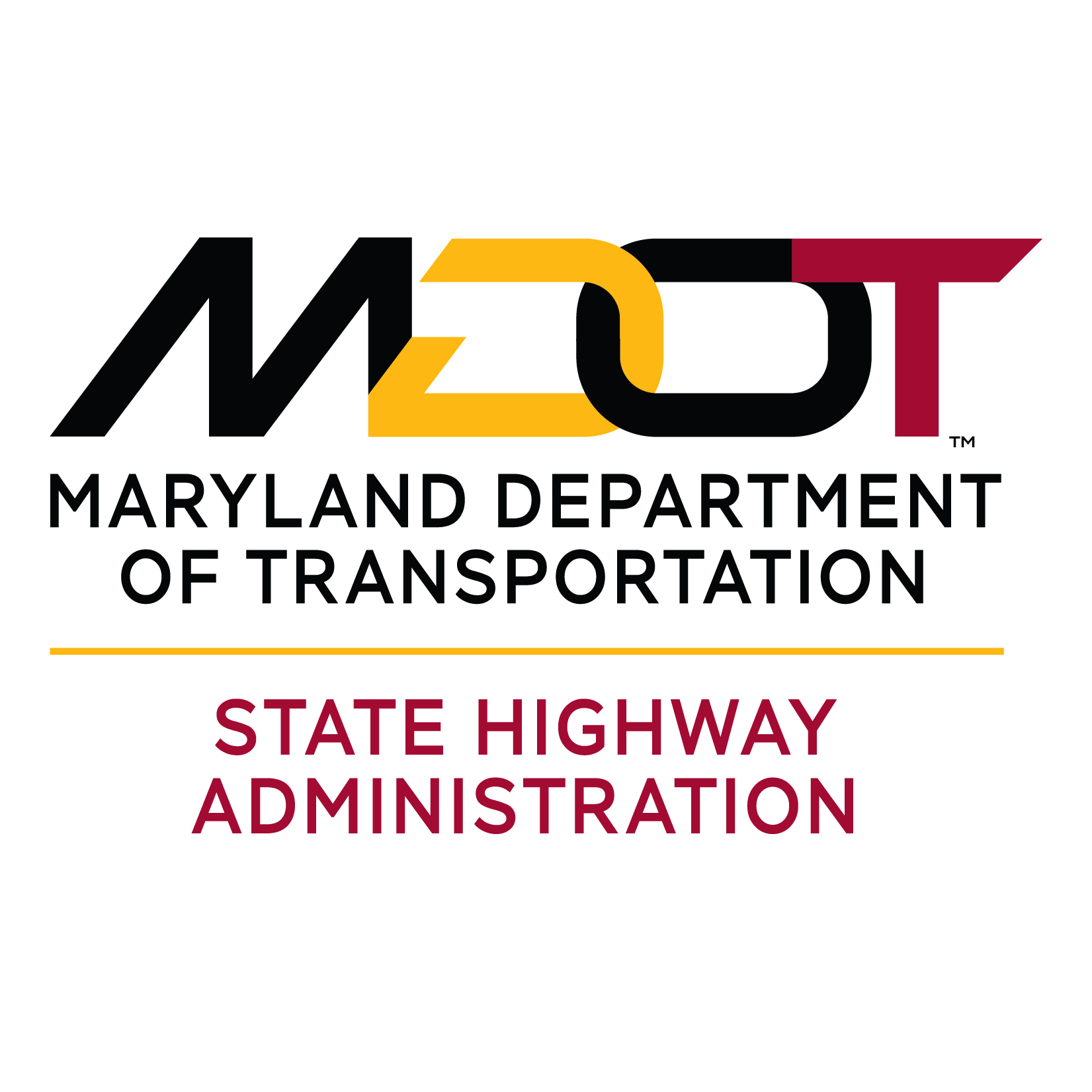 SEEE! Paddling Places lead to streams of conscious which hopefully bridges our memory.

Enjoyed the video and moreso, learning about that eight-man rowing team.

Great elevation plan view of this beautiful bridge. That’s some deadman running into the southerly bank! And I can see what I thought were further-distant vaulting towers are actually overhead superstructure of the two draw decks. Hope she still stands 'n spans.

Yeah! That Deadman is a monster.
The Montlake Bridge is alive and well. I have a lot of images and history of it plus the Canal and the general area. Here are some more drawings from the Library of Congress. Clearance is 46 feet but 50 feet or so to the water if you climb over the railing and consider jumping. It a rite of passage but I could never work up the nerve. 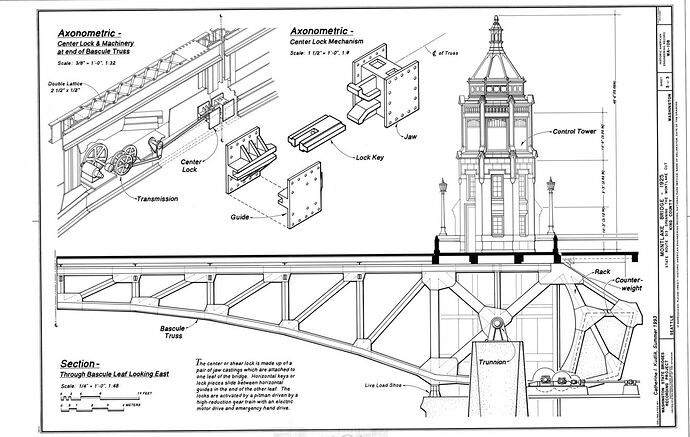 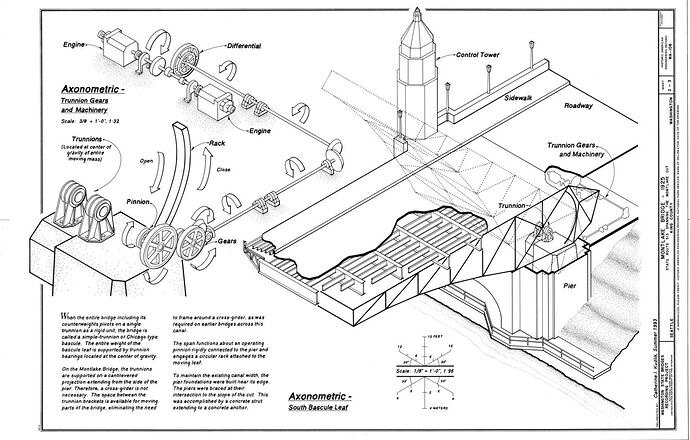 Lest this thread completely lose paddling relevance let me say that the UW still rents canoes but not out of the Shell House. Immediately next door. You can no longer rent one with a note from your Mother.
Different times and all. They still favor Grumman silver torpedoes but have added a fleet of SOT’s which was a good move since most of their clientele have little to no boating experience and absolutely zero knowledge of COLREGS. They operate on the assumption that the smaller boat always has the right-of-way so many of them end up swimming. Additionally, there is a huge population of recreational kayakers who share the zero-knowledge ethic but own boats without means of floatation. The Cut gets really busy and rough on weekends and I’ve seen a few of these craft sink.

Those sinking rec boats are still 30 feet down at the bottom of the Cut, allegedly along with Jason who disappeared from the scene in the very early '70’s. Jason was not a boater. Not sure that he was a swimmer actually but he might be down there. He was a police informant who, it is said, was tied to a metal chair and thrown off the bridge.

Guess that blew the relevance argument.

Lived in Kirkland for about 10 years. Paddled over that way often (and had a contract job on Lake Union that I paddled to for a while).
“The cut” can be a dangerous place for the kayaker, at about 4mph looking forward, with rowers coming up from behind at twice your speed, looking the other direction. (not to mention the large reflecting wake from the ‘big boats’ bouncing off the walls.

“The cut” can be a dangerous place for the kayaker, at about 4mph looking forward, with rowers coming up from behind at twice your speed, looking the other direction. (not to mention the large reflecting wake from the ‘big boats’ bouncing off the walls.

I found the book to be a fast, engaging read. Highly recommend it to anyone. Thanks for this post!

Purple Reign. I call the boys from Montlake, the Men in the Boat. I am a third generation Husky, but was raised on the East Coast. My parents always talked about UW so I moved West 50 years ago. All the boys in the family are tall, so the folks wanted us to try out for crew. We heard the stories for decades.

It is a very competitive business this rowing. We never rowed for UW but I have a friend that did. I know a daughter of a close friend that crewed for Western in Bellingham. Washington roots run deep. The climate never suited me so I left, but the family showed up in Kalama in 1889. They were loggers, school teachers, newspaper men and prosecuting attorneys. My great great uncle had a sawmill in Longview, so naturally I studied forestry.

Thanks for the suggestion. I really enjoyed the clip and all the background information on the locale. Being a paddler who is also a retired construction supervisor I appreciate and admire bridges that we get to paddle beneath.

Never crewed myself (I prefer to see where I am going) but my godson/nephew was on a team in upstate NY that won many regionals and even nationals in double and quad and it was always fun to watch their trials and races from their boat house dock on Fish Creek in Saratoga. He loved rowing and was pursued by colleges who would have given him crew scholarships. But after having some blackout events in his senior year of HS he was diagnosed with an extremely rare heart defect and advised that it would be dangerous to push himself at the next step level college crew would demand. It was a bummer that he had to drop out of it. Man, did it keep him fit while he was doing it, though.

We have two to four high school’s and a private club that meet every once and a while and compete in our river south of the bridge where it is more calm. You can sure tell the freshpersons from the seniors. Seniors go straight and together.

The local college, JU, travels to compete. My daughter was on the Univ Central Florida crew. She was on an 8.