Full disclosure: I am faaaarr from an expert. In fact, I consider myself a beginner/almost-intermediate paddler (even though I attempted the Yukon River Quest in a tandem kayak—we had to scratch due to faulty rental gear). Anyhow, I got tired of renting and borrowing sea kayaks—especially since they didn’t fit my short legs—so I bought my first boat: a Boreal Designs Ellesmere. The skeg bungee and deck bungees were worn out and the skeg was very sluggish in deploying, so today I replaced the bungees. Before I started, I perused the forum here and found tons of helpful info (specifically from users jeffro, Peter_K, wilsoj2, system, and bowler1). So, thank you!

Here are a few photos of the process.

I cut the old bungee, turned the kayak over, and worked the skeg out slowly so I could see how everything was connected. Added new bungee and cleaned up the grime. 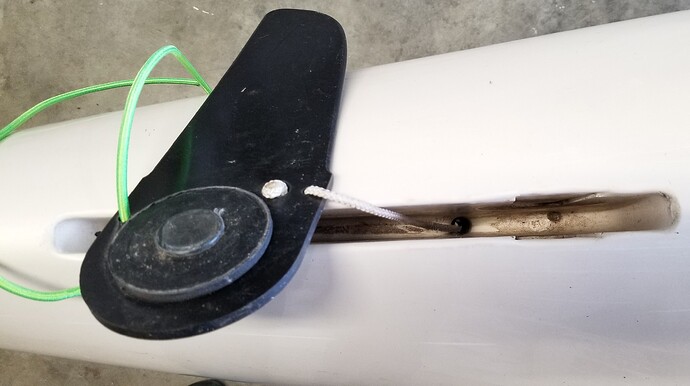 I had a hard time getting the second end of the bungee through the hole, so I tied a small string to it, dropped that through, and pulled on it. Voila! 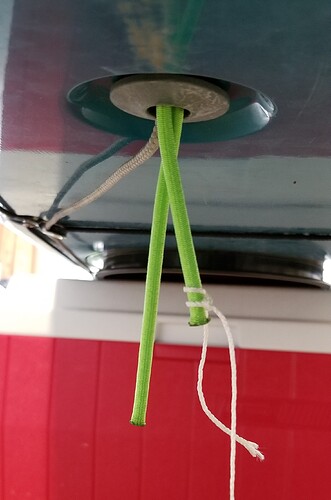 Turned the boat back over and clamped the bungee in place while testing the skeg rope to see how tight the bungee should be before I tied it off. I’m not sure if I got it right, but next time I put the boat in the water, I’ll know. 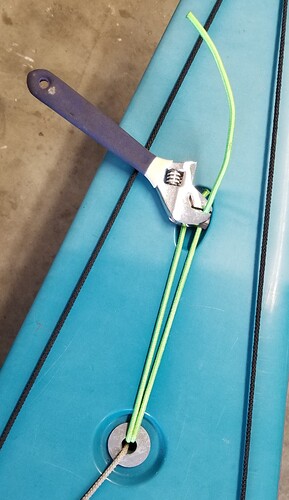 And I tied a small bit of bright orange twine to the skeg rope near the cleat so when I’m paddling, I can see if it’s retracted all the way or if I need to jerk on the line even harder. 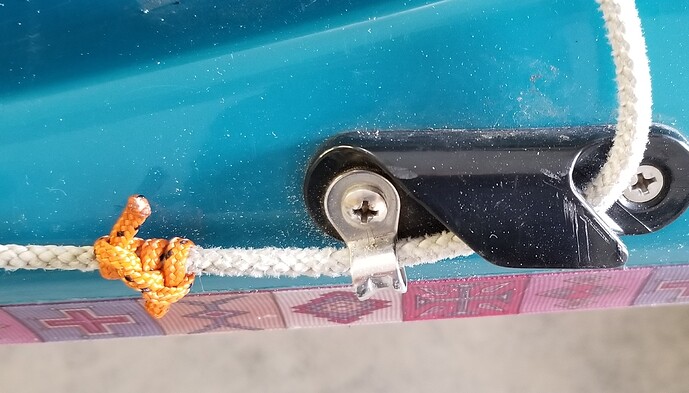 Welcome to the neighborhood and congrats on a job well done!

Thanks! I’m feeling rather pleased with myself. But I wouldn’t have known where to begin without first searching this forum, so I’m happy to be here.

Good job. Don’t cut off the tag ends of the bungee yet. You can use the ends for adjustment, if it is too tight, or too loose.

I am a rudder person and have been replacing dead bungee for years, it is an easy thing.

The skegs I have seen were, usually hooked on the leading edge to facilitate their removal. I have not seen that style of skeg before, any further info, please.

Too late–I already cut off the ends. But you’re right–I should’ve left them on until I knew whether it was working well or not. Oh well… As far as more info, I know nothing about skegs other than what I did on this one, so I’m not much help.

Good job! I like the idea of the orange rope to track whether the skeg is fully housed. I paddled without a tracking device on the Romany for a couple of years or so because l was too lazy to fuss with the hadstoppedworking rope skeg. Finally got to it last spring, and while it is working it does tend to sit a little proud. Normally that is a preferable state on these boats for paddling. But come the beach and getting it to the car l prefer it fully up.

Nice job doing some maintenance on a great boat!

I would suggest drilling a small hole at the end of the skeg and putting in a small loop of line. This makes it easy to unjam the skeg when it picks up the perfectly sized pebble on the beach. If you are paddling with someone, it can even be freed up on the water.

If you are paddling with someone, it can even be freed up on the water.

or, if alone, bring the line up to the cockpit.
I used this technique with an NDK Explorer (with rope skeg) when paddling up the east coast of Australia several years ago.
The night before, I would ‘rig’ the line from the hole in the skeg up the deck, to the cockpit.
The next morning, after launching through surf (beyond surf zone), I would try the skeg, if jammed, would pull on line to skeg, I would then pull off the line (loop) to the skeg hole.