How do I remove dirt stains from Kayak

We have a couple of plastic kayaks that are stored outside. I am trying to figure out how to remove bad dirt stains from the hull. This is build up from stuff from the trees and such from sitting outside.

I have tried using car soap, an electric power washer with zep power washer soap, I even have taken a scrub brush to them. After hours, I still can’t get them clean. They look better, but not good. Any ideas would be much appreciated.

Any photos of the stains? 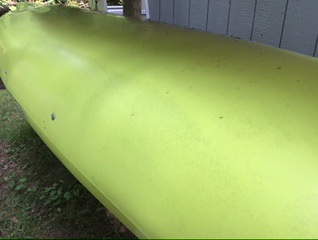 I’d try a stiff scrub brush with a non-abrasive cleanser like Bon Ami or Comet or maybe Bartenders Friend. That’s what I’ve done when I’ve purchased a dirty used boat or cleaned up boats with years of dirt for other people. I’ve got one canoe stored outside and it’s covered with plant crud and I’ll use non-abrasive cleanser after a bubble bath with Dawn.

In addition to Tom’s suggestions, have you tried a Mr. Clean Magic Eraser?

I’d try a stiff scrub brush with a non-abrasive cleanser like Bon Ami or Comet or maybe Bartenders Friend.

The next step is acetone and a rag.

Why not call the manufacturer? I’m sure that this isn’t a new question.

When I looked up Comet online it said non-abrasive. I’m no cleanser expert and you may be right. The Bartender Helper stuff says try it on a small area first. I’m just suggesting that you try one that says non-abrasive on it…we’ve got Bon Ami in the house. I’d hit it with Dawn first.

Update: all three kayaks are of different manufacturers. Two are LL Bean and one is an Old E oldest, is a pink LL Bean and it cleaned up well enough that I can’t see any residual dirt. The two that are problematic are a yellow (photo) and a lime green.

Today, I tried a similar product to simple green, only because I couldn’t find any locally. I will try it if when I get some. I tried isopropyl alcohol and gasoline and none of those worked either.

Thanks for the suggestions, I plan on trying them. I guess the next logical question is since I have to store them outside, is there a good way to prevent it from getting worse? Would a tarp help?

Thank you, I have been using a scrub brush with the other products, but I will give them bar keepers friend a shot. I have some handy, I have used it on a lot of stuff in the house including a glass cook top. I know it is noNe abrasive So that shouldn’t scratch the kayak. I don’t know about the other product you mentioned. I will need to look for it.

Can I wax or put some other coating on the bottom to protect it?

I have one of those too somewhere, I will give it a shot too.

Are the stains just on the hull? If they are, honestly, I would not bother working so hard on cleaning them. You are not going to see them when the boats are in the water anyway.

None of the plastic boats I have ever used stayed pristine. It’s kind of a losing battle to fret about appearance, like when we were kids and tried to preserve our new white Keds sneakers (or Air Jordans if you are from a younger generation than me) which inevitably got dirty and scuffed a week or two into wearing them, but they still worked fine.

If you have to store your boats outside they are either going to fade or stain eventually. Keeping them sprayed down with Scotch 303 UV protectant will help but not 100%. If you cover them with a plastic tarp you will trap moisture and get mildew or mold slime stains. If you use a breathable tarp like canvas, you can still get slime.

If you can get them off the ground it helps a bit protecting the surface but make sure they are well supported so you don’t oilcan the hulls in the heat. Leaning on their sides is safer.

Minor scratching from abrasives (and you will get plenty just from using the boats) will not affect performance.

I know it’s hard to accept when a nice new toy starts to get worn looking, but you learn to live with it and just enjoy that the boat does what it is supposed to regardless of appearance (and, like I said, nobody sees more than half your boat when you are paddling,)

Personally I would not worry about the stains, once you clean the dirt off no one really cares if a kayak is pristine, it’s a water toy, go have fun.

If you want to be systematic you could try something acidic like vinegar, or stronger acids you can buy at a hardware store. Bartenders friend is an oxidizing acid (oxalic acid) and that might be interesting to try. For something basic try ammonia, backing soda, washing soda and you can buy hydroxide at a haradware store. It sounds like you have tried polar and non polar organic solvents like alcohols, and gasoline. The last thing to try is oxidants like chlorine bleach or hydrogen peroxide. Do not mix any of the above.

The dark stains from plant materials are usually lignans which are polyphenolic compounds, when they get photolyzed they crosslink and are probably chemically bonded to the polymer backbone of the polypropylene, so you may be out of luck. Lignans will sometimes dissolve in strong bases like ammonia or hydroxide, and sometimes a very basic organic solvent like triethylamine or diisopropylethamine or piperidine will dissolve them. If you start hunting around for those chemicals you might have the DEA checking you out.

If you saw my boats you would not notice those stains… Point being the fundamentals are ok. They float and any gear inside storage compartments are dry at least in dry bags.

But if it is going to make you crazy, put them on some kind of block a foot or so off the ground and cover them w a tarp. Or make your own version of or buy one of the kayak racks that holds them off the ground.

Yes, as willowleaf suggested I think 303 aerospace protectant is the easiest way to protect your boats. It’s a UV protectant and it’s not water soluble like armorall and it leaves a slick coating that will make it a little harder for dirt to stick to your boats. Just spray on and wipe and you’re done. It’s popular with canoe and kayak folks.

Oxalic acid is used in most hull cleaners sold in marine supply and hardware stores, It works miracles on composite, metal, or painted hulls. However the labels do not say anything about plastic hulls. If you try it read the directions carefully, it’s caustic.

For outdoor storage, store them off the ground and and build a simple frame and loosely tent them with a tarp. Keep the tarp from touching the boats. This will protect them from dirt, leaves, rain, and UV.

Check out Kayaks Racks and Loading and the second HERE for more tips on stiorage.

Someone said Acetone, which might work or a good degreaser but if you do something like that make sure to remove it quickly and test on a small spot of the kayak first to make sure it doesn’t damage it in any way. And as others have stated, I wouldn’t worry much about stays, especially on the bottom, the fish won’t care lol.

Good luck and paddle on!