How do you mount/store your kayak?

Let’s see those photos… for those of you that wall or ceiling mount… would love to see different ideas and setups!

Have all of mine hanging from the garage ceiling.
Advantages: Out of the way when you aren’t using them, keeps them out of the sun and they stay clean, prevents them from becoming homes to small animals, locked up.
Disadvantage: Putting them up and getting them down.

Two get the spa treatment (one not shown in this photo) and one doesn’t. 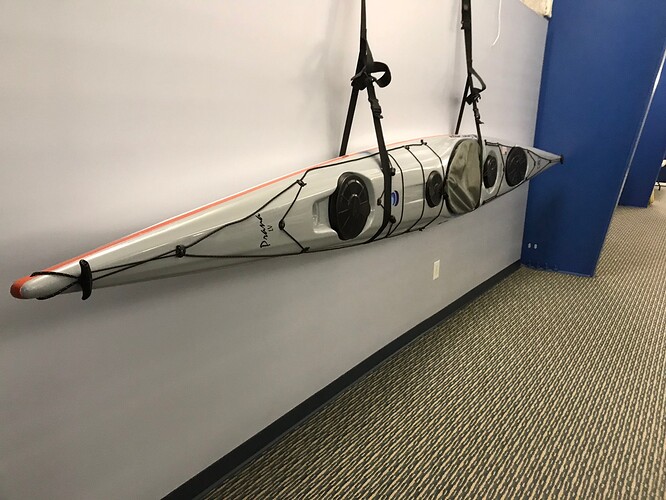 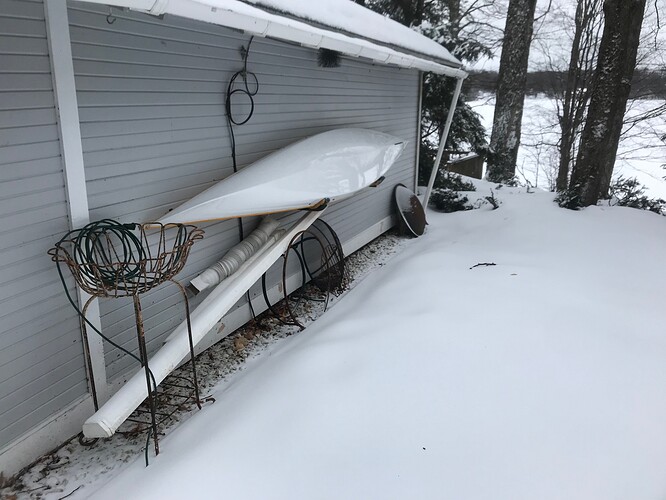 I suspend some of mine at the moment from the joists in my basement (which, fortunately, has 9’ ceilings). I solved the problem of hoisting them up there solo (since I live alone) by the following method.

The “trapezes” that cradle the boats are 12’ long lengths of braided rope threaded through 4’ lengths of pool noodle. I screwed pairs of large hooks into the joists about 30" apart. One end of each rope has an overhand loop tied in it and stays permanently connected to one hook, the far one in the photos. The other end of the rope has several overhand loops tied in it, one at the very end and then about 20" and 40" from the end.

To hang a kayak I first fasten the very end loop from the second hook (near in the photos) and center the pool noodles. This makes the trapezes hang down about waist height. At that position I can easily slide the kayak onto the pool noodles. Then I get my little 4’ step ladder so I can reach up and move one of the trapezes up, by pulling the end loop off and pulling up the next loop (at 20" along the rope) and placing it on the hook. Then I move to the other trapeze and repeat that so the boat is now level again. Then back to the first trapeze and hoist to the third loop (at 40"), finally back to the second trapeze and hoist it to the third loop.

To take a boat down, I reverse the process until it is waist level again and I can slide it out of the trapezes.

You can add as many loops as you need depending on your ceiling clearance. Having a heavier boat (none of mine are over 45 pounds) might mean having more loops closer together.

Advantages of this system are that the materials are cheap and easy to find and they allow storing solo. It doesn’t look elegant but it works. I had tried the fancy pulley and cord systems but the problem was in finding a place to tie off the rope once it was pulled up. The other problem is that the basement has a lot of duct work and piping that I have to straddle with the boats so being able to have the lateral room to arrange a dual pulley system is not practical. Would not usually have that issue in a garage.

And, in fact, I’m in the process of having a 2 car garage with a workshop/boat shop extension on it, a clear-span steel building and I plan to rig the same trapezes over there so I can have my basement back. The pulley systems may work there, but I have gotten used to my staggered loops and will probably stick with them.

The last photo shows the current situation (there are 4 other kayaks in that photo but they are Feathercraft and PakBoat folders in their storage duffels on the shelving – but in the summer I leave some of them set up, like the black and yellow PakBoat in the first two pics. I do have two other sets of trapezes elsewhere in the basement that I normally use but there are too many other projects down there right now to easily get to them – hence the boats on the floor and my planned garage, which should be done by the end of February if we continue to have such bizarrely warm weather here in Pittsburgh (70 F here today!). 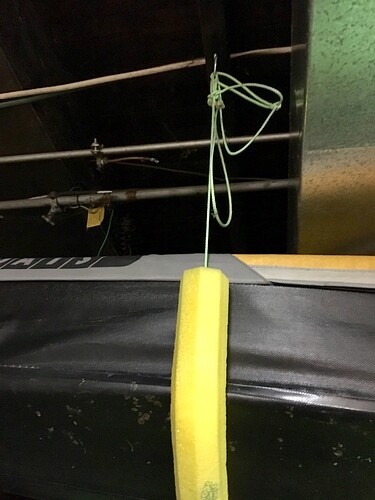 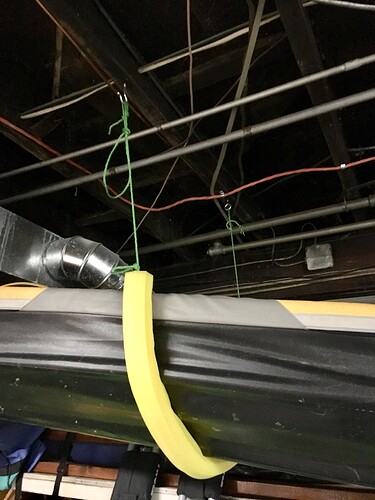 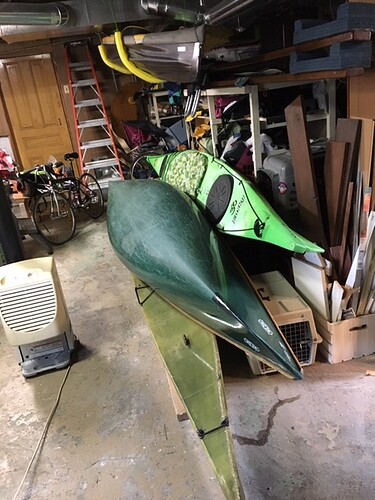 I built a simple set of blocks with dive weight belt slings that would raise the boats from the dock up out of the way in the chickee. I had one system on each side of the chickee (tiki)… 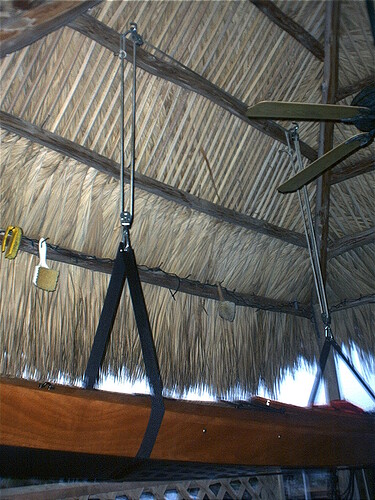 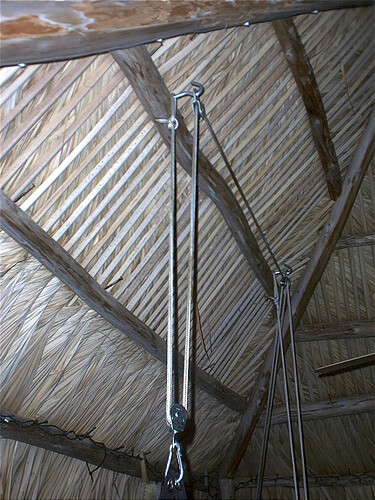 Mine also hang from 2 inch wide webbing straps with a crude hoist system to raise and lower the forward and rear straps independently. The only addition I have is a center strap that gets connected and snugged up after everything is in position. 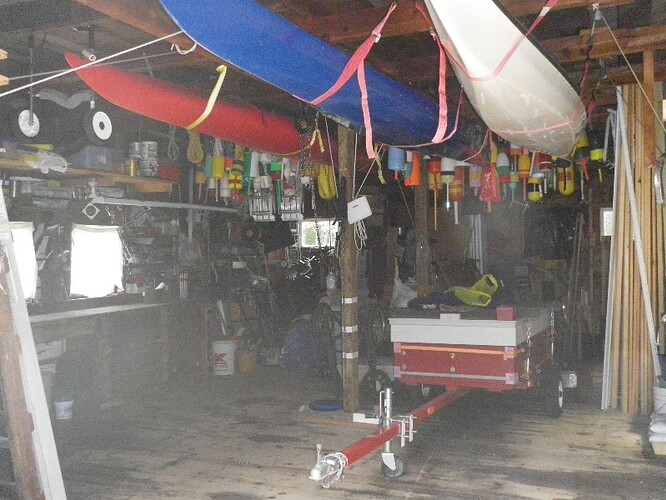 raise and lower the forward and rear straps independently.

Mine were also two independent lines that met at one end through a double block. I never could get one line to work without a lot more hardware.
Then sometimes there were just too many. 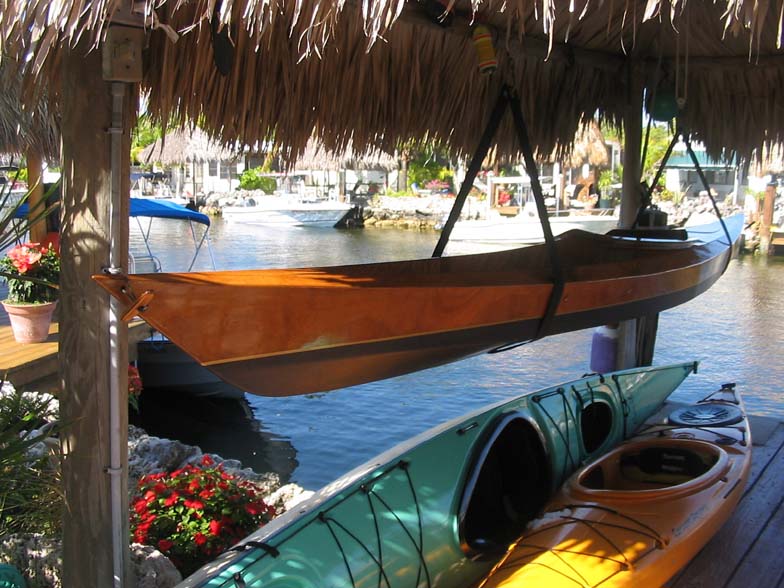 That’s quite a jaunty roof, grayhawk.

Mine were also two independent lines that met at one end through a double block. I never could get one line to work without a lot more hardware.

My setup is more crude. I raise one end of the kayak, the bow say, 2-3 feet. I tie that line off and then raise the stern 3-4 feet. Then back to the bow, etc. It’s quick enough that I was never motivated to improve it.

Gotta look that up…

All but one of mine are stored on a roll around cart and in my shop. When I need the extra space in the shop for projects, I just roll the cart outside. They never stay out over night and most of the time I just work around them in the shop.

Several ways. I got some heavy duty “L” brackets that I bolted to the studs in the shed, and put foam V blocks on them, just V blocks on the floor, and a rolling cart that I built from scrap wood. The shed hasn’t been that empty in years… 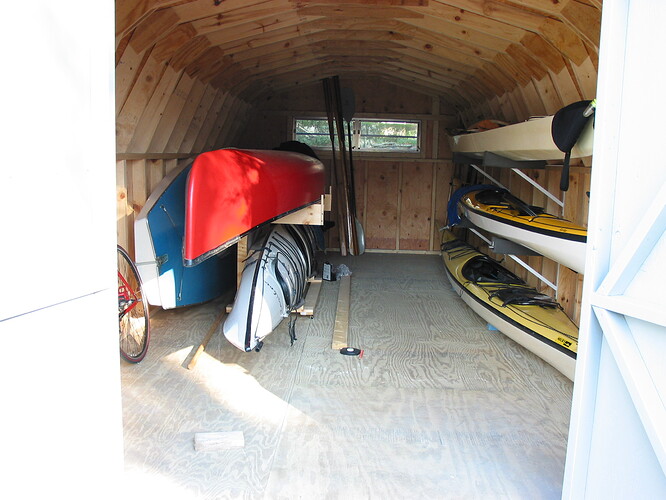 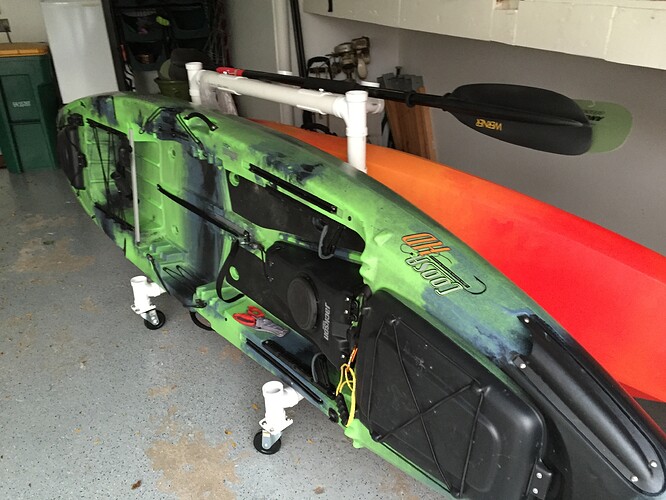 Inspired by kayak DIYers I built a rolling storage rack for my 2 fishing kayaks.

I built a rolling rack out of electrical EMT pipe and some structural connectors. I roll
it in/out of my shop to work or load. The top kayak (heaviest) lines up directly with my truck for easy loading. The bottom one will also load/unload directly from the rack 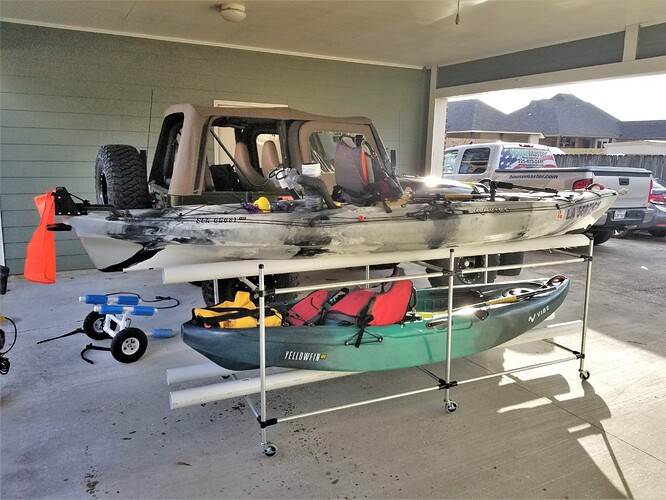 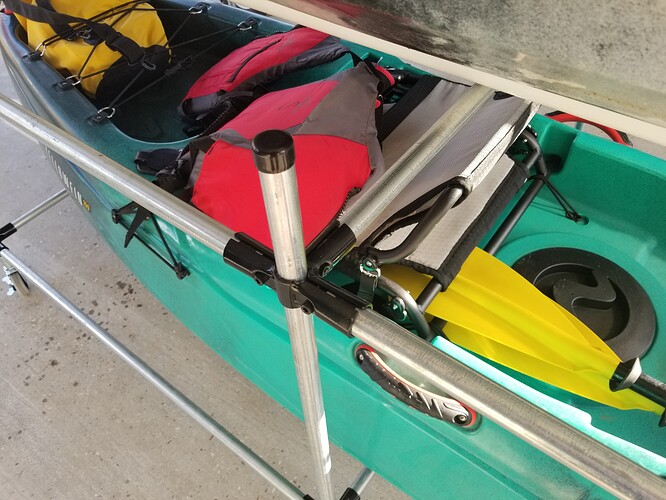 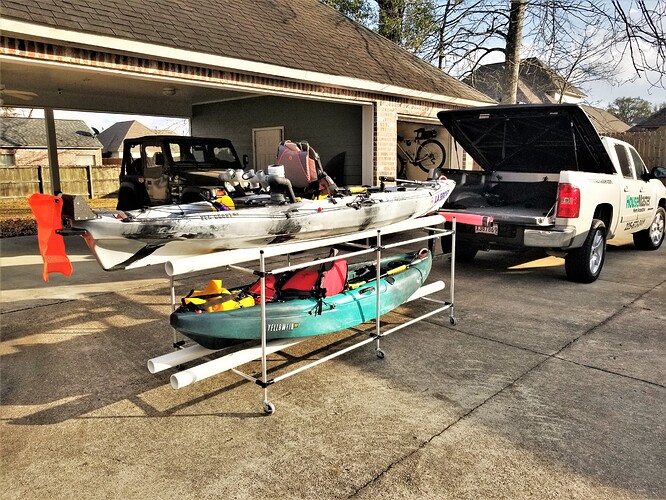 I built a wall rack in my garage for my canoes, and I hang my kayaks from the garage ceiling using Tie Boss locking tie downs as pseudo-pulleys. This allows me to store four kayaks, three canoes, two vehicles and one Malone MicroSport boat trailer in a two-car garage. 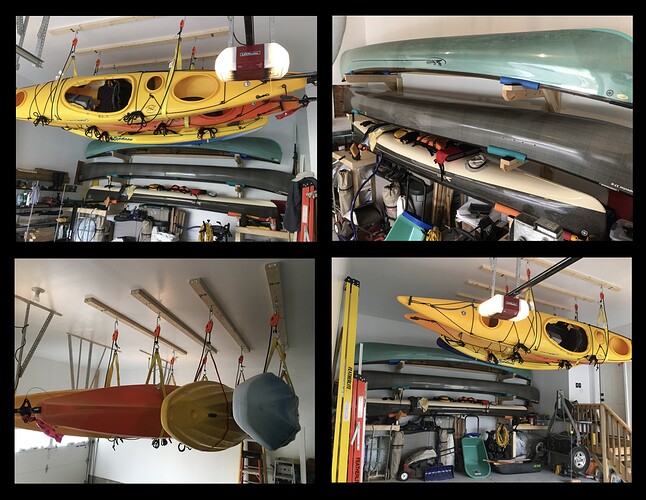 Over the summer I had a free day, a stack of six boats, and a pile of leftover lumber. 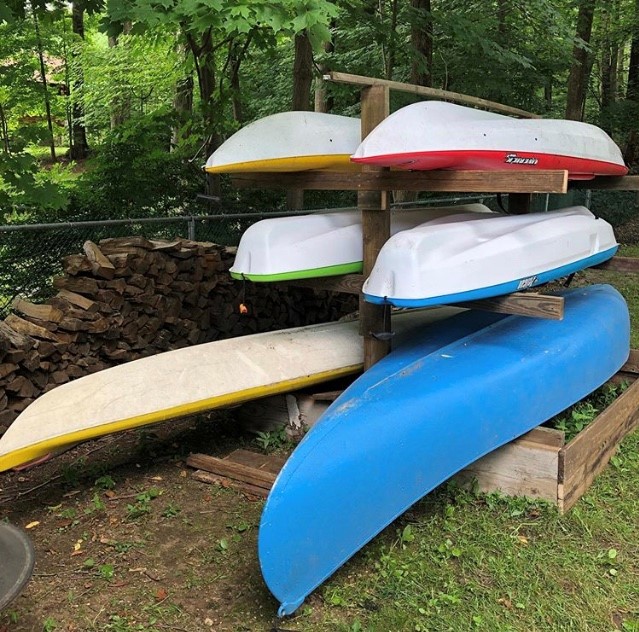 I have the suspended strap setup from our garage ceiling, it’s similar to the ones that I use for storing bikes. Slide the straps fore and aft and then pull on the cords to raise it. For the wood kayak I built, I bought a zippered kayak/canoe case/cover to put it in first. for the other kayaks, we use the wall mount strap systems. I always wash the yaks thoroughly before storage, scrub off any stains and check all the fittings.

I like the rolling rack ideas I’ve seen here so far. That might be an option to consider once my boat shop building is complete since it would enable me to move them around within the space to accommodate various shop projects as needed and leave more wall space free for hangers and shelving for paddles, other gear and tools. Could also roll the rack out onto the driveway so boats could be hosed off on it more easily before storage.

You can find these on Etsy.com. The wind will not blow these over (unlike some others!
Kayak Designs LLC! 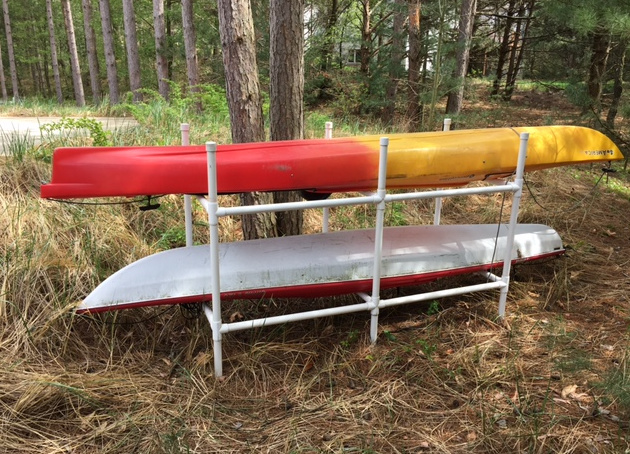 I have four kayaks on my trailer and put two 2×4s shaped like an aztec pyramid with the j shaped kayak racks. Small kayak on top and double on the bottom with a 14 foot in the middle. Wish I could attach my photo…maybe I did. 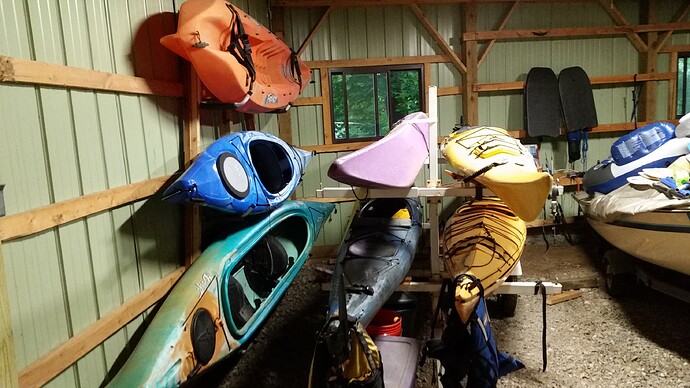