How do you name them?

As a side question to my last post mentioning naming my new canoe “Black Magic Woman”, what are, if any, your naming rules?

I have the color & song title rule which has given my Anas Acuta the name “Touch of Grey”, my previous canoe was “Green River”, and a Betsie Bay Recluse I used to own was “Brown eyed Girl”.

And for bikes, my current road bike is “Green eyed Lady”, its predecessor was “Little Red Corvette”, and current mountain bike is “Roadhouse Blues”. Just something fun to do, I guess.

But, how do you name your toys?

I have only named the two SOFs I built (giving me the “right”). The first was named “Ronin” which literally means a “wave tossed person” in Japanese but was then applied to “masterless” (free from feudal obligation) samurai. The literal and figurative meanings resonnate with me.

The second SOF was built with more rocker to have more “play” ability in rough water. I named this one “Kaze” which is Japanese for “wind”.

I bought a Greenland style S&G from a builder/paddler in ME. He named the boat “Murre” which is northern hemisphere sea bird. I didn’t feel any affinity to that name and didn’t use it, although it was stenciled on the boat.

I’ve just got the red one, the red and white one, and the white one. I suppose if I were to name the white one it would be Moby Yak.

I name cars and boats. I wait until they tell me their name, for example, we had a Ford Fusion that stranded me a lot. We fix her and then she’d strand us. Once in a curse filled volley I called her Lucy, from the Peanuts series, Lucy always disappointed Charlie Brown.

My Cetus in named Katherine, after my departed friend. Katherine gave great hugs, had blond hair with a purple streak, would get you through difficult times and would bite your head off without notice. That describes a Cetus. :- ) So I use purple bow and stern lines and someday I’ll replace the rigging with purple.

My previous kayak was “One Moment of Perfect Beauty,” or Moment for short. That boat gave me a lot of beautiful sunsets, I’d paddle out in Provincetown harbor to catch the sunset everyday, well, most everyday.

Sometimes the boat itself suggests the name. In early spring I purchased a somewhat dainty CD Slipstream in fiberglass. Clearly the boat would be named “Glass Slipper” or “Slippy” once familiarity set in.

I often paddle solo and occasionally need/want to talk to the kayak. Addressing the kayak as “Hey you” seems disrespectful; a name is always better.

On my 1st paddle up the east coast of Australia ('93), I had ordered an ‘Arctic Raider’ in a kevlar layup (supposed to weigh 20kg).
When I got there, I discovered it being much heavier - I was told that they thought I would want a heavier/stronger layup for my trip and doubled the amount - I think it was about 30kg.
Anyway, I started referring to it as the ‘Arthritic Gator’.
(I paddled it from Syd. to Brisbane, traded it in for a ‘standard’ layup Arctic Raider at a shop there, then continued on trip.)

At one time I referred to my Tahsis as the Mango Missile which I no longer do. I don’t really have other names for my boats other than that.

I call them…the C-17, the Petrel Play, the Gruman, the Mad River, the Gray boat, the yellow boat, etc

My canoe got named by the forum. There was a thread started by a member asking for some love for rec-kayaks and for the most part he was being told they were at best marginally ok boats for beginners. As the conversation went on some pictures were shared of this giant blowup two story high pink flamingo with a half dozen people on it without PFDs, even onboard and floating a half mile from shore. The poster asking if this would be a good watercraft to do an Atlantic crossing?

I was of the mindset that a rec-kayak with some floatation was as safe as my canoe with some added flotation and I liked the idea of being a safe pink flamingo so I dubbed my canoe the worlds first Old Town Pink Flamingo 147 and asked the forum to help me pick a suitable decal for my bow.

After a couple seasons others on our river are now referring to me as the Flamingo.

Hey guys. It's OK to buy a rec kayak 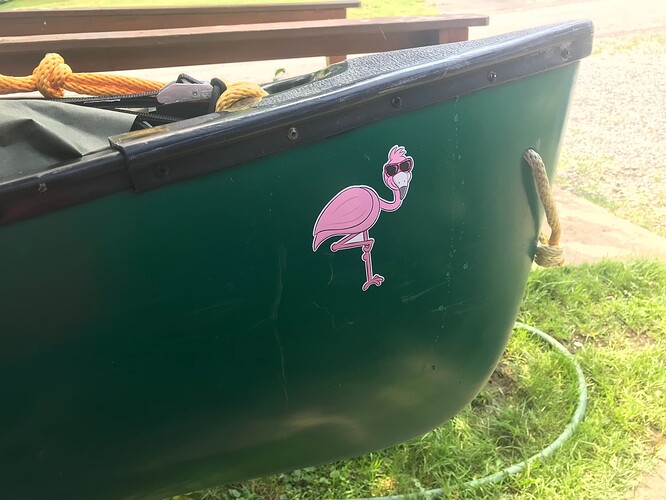 Most of my boat names suggested themselves in one way or another. In order below are: 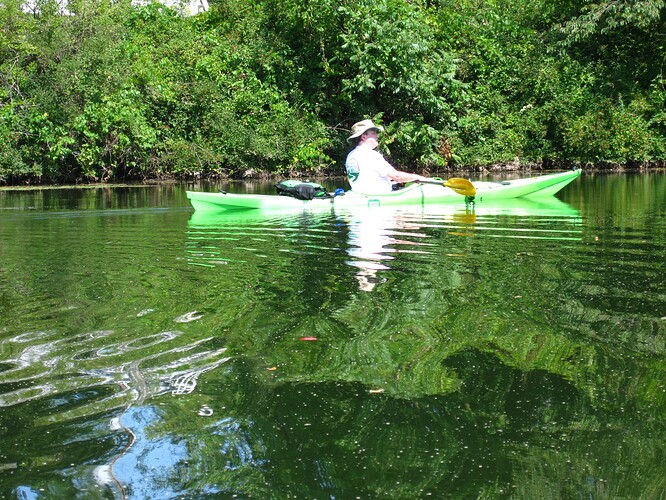 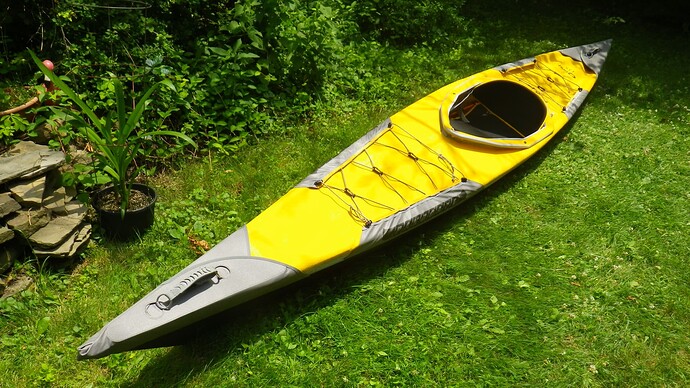 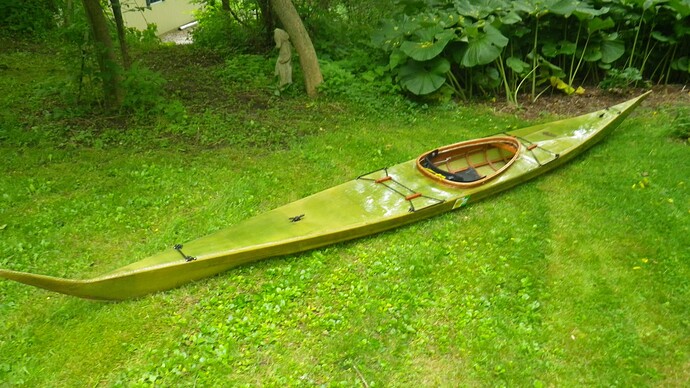 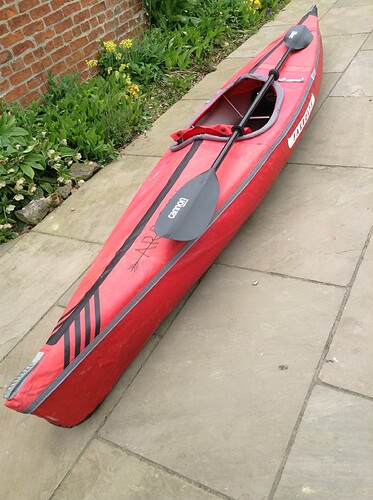 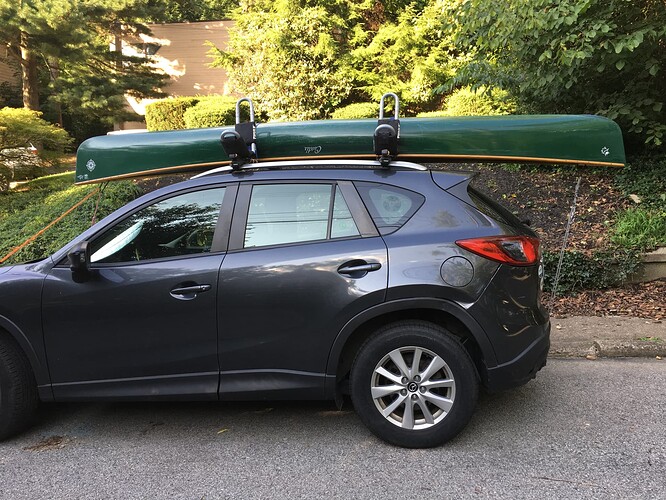 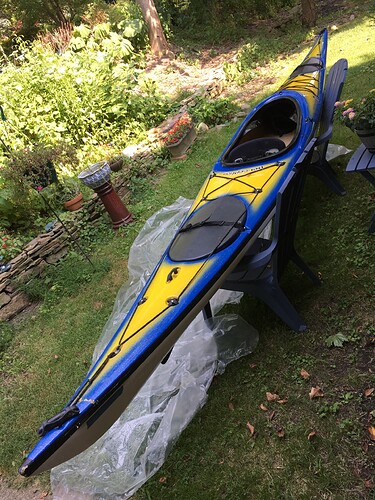 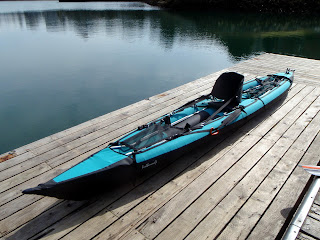 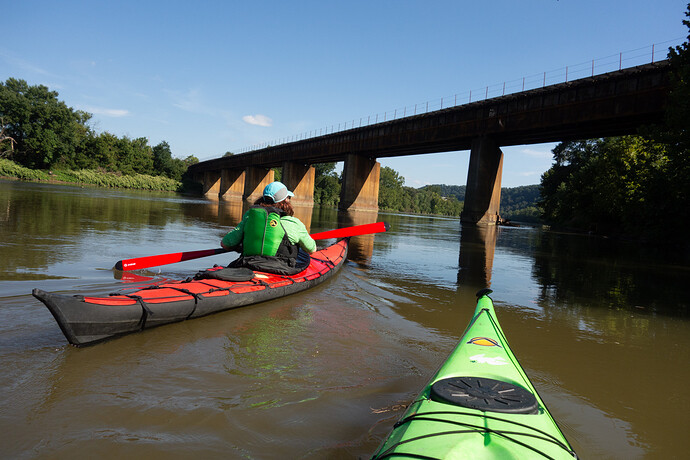 I try to name things, but the names never stick. I do have two bikes with names (out of six total). Xena (Jamis Xenith Pro) and Valkyrie (an all-black Trek Domane SLR8). Trying to come up with one for the new gravel bike, but haven’t stuck on anything.

Kayaks, same story. Can’t find names that stick. Except the awful Sundolphin Journey SS we just sold. We called it The Spud, because it paddled like a potato. The harder you worked, the more it wanted to spin in a circle. Every stroke was a correction stroke. Hubby bought that thinking it would be good for the dog. Not so. Highly NOT recommended!

I often kayak alone and since it’s usually cooler out on the water, any boat I’m in becomes the “Air Conditioned Gypsy”, after the line in the song by The Who. And I have a friendly competition going with a paddling friend for who can find the nicest derelict lobster buoy. So, ! showed up at a paddle with the name “Buoy Bandit” taped to my stern. But my friend has still found the best buoy so far this year.

How do you name them? Paddlers' Place

Most of my boat names suggested themselves in one way or another. In order below are: Snow Pea Chiquita Sisiutl (the big green sea monster with a head at each end of Haida legend) Puff (Pakboat Puffin with fat inflatable sponson tubes I puff up by mouth) The Bug (un-original, yes) Neytiri (Perception Avatar, blue with sparkles, like the skin of the eponymous alien girlfriend in the “Avatar” movie.) Blue Barge Coho [IMG_2776 2][Quest IMAGE] [Sisiutl IMAGE] [Puffin IMAGE] [IMG_0278 2] […

That green Greenland skin on is beautiful.

I was in an accident that was someone else’s fault. I got enough pain and suffering money to buy a kayak. Luckily I wasn’t admitted to the hospital. I was treated and released.

I have a bike I call “Sunrise” or “Carolina in the Morning”. It’s actually painted like a sunrise. I need to buy some good yellow bar tape for it.

Thanks. Unfortunately, it is due to get a new skin (the seam stitching starts to get rough after a while and I need to repair a crack in the stern “tail”.) I am hoping I can replicate that lovely translucent jade color. It looks really pretty with sunlight coming through it: 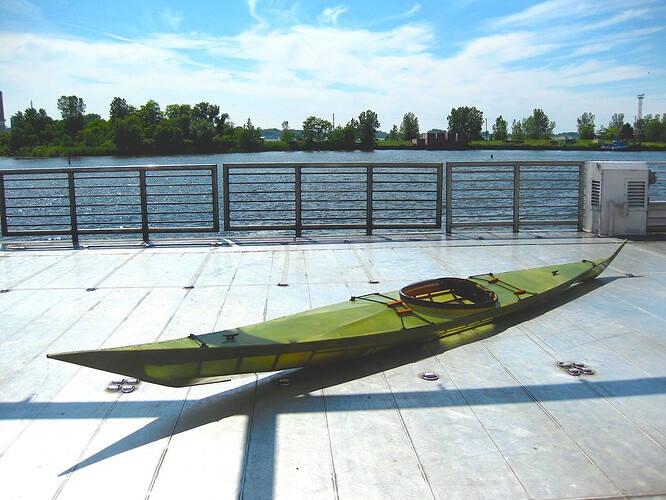 Manufacturers name is good for me.

Most of my boats I don’t bother to name. I’ve had a few that I have given a nickname. My taurea ww canoe I nicknamed the “turdo”. I swam a lot and ran a few sh** creeks in it. I tried to resurrect an old campways shoshone bucket boat raft, and painted on it “old school fool”. My perception gyramax was called the “beast” by the guys who loaded the flatbed at the Rivermen Rafting Company. It was considered a long boat even back in the day . My current ride, pyranha 12r, is jokingly referred to as “the caddy”. One of my paddlin’ buds named it. Smooth ride, big boat. I refer to my sevylor ds duckies as “pool toys”. That’s actually a slam on the folks who have never paddled a ds and think that all sevylors are junk. When I paddled an m.e. canoe I referred to it simply as the “banana boat”. , a reference to the rockered ends. I trashed an aluminum canoe once (roll dam, Maine) and it didn’t paddle so great after that. It became “the pig” and the xp10 kayak is “boating for dummies”. A reference to the fact I’ve never flipped it (and couldn’t roll it if I did flip) and the boats stability.

The names of my boats varies, depending on the amount of grief they are giving me at the time.

I have those moments during building where I call the boat several names…time to sit down and calm down.