First the question (in case you don’t want to read the rest):
In a seakayak (not sit on top), how does one ‘rescue’ a dog - get it to shore as easily as possible (river, less than 1/2 mile wide, but current keeping dog near middle)

I was on my daily (predawn) paddle on the St Johns (near Jacksonville).
While crossing the channel (crossing sides of the river), I noticed what looked like a crab pot float up ahead. Knowing it was ‘out of place’ (in the middle of the channel), I paddled a little closer and realized it was a dog, weakly paddling.
I decided to try to get it to the shore.
First I just gave it a place to ‘rest up’ for a couple minutes.
After making sure it wasn’t going to bite me, I tried helping it up on deck. It was a bit too heavy for me to lift up (and it is a ‘slippery’ deck, nothing for the dog to grab onto).
I ended up holding onto the dog and paddling (as best I could) with one arm. There was a 2mph current (ebb), so I had to get to shore as quickly as I could - I was aiming for the ‘Fire & Rescue’ station (I thought it would be open - as the last time I was there (to report a ‘body’ on shore), they were open (predawn)).
Don’t know why (the lights, the current, whatever), but the dog kept trying to go the other way. As I was much closer to the north side of the river (fairly close to Metropolitan Park), I kept turning him around. This slowed me down quite a bit (and was quite exhausting - one armed paddling is quite slow).
Finally, I made it to the other side, at this point, had drifted just beyond Met. Park, and was approaching shipyards - not a place to be drifting into.
The dog got to shore, sat a few minutes. I got out of the kayak and (carefully - it’s a carbon boat) brought it up on the sharp edged rocks (hopefully) just beyond the water (noting it was ebbing, but one big boat wave could do it in).
After getting out, the dog had gotten up and left. Thinking it was gone, I thought my job was done, and I could get back in and go.
I walked up the craggy shoreline to a field above. As I was turning around to leave, the dog came running back.
So now I decided to walk it up to the Fire&Rescue. Took a little while as the dog ran behind fences and couldn’t get out, ran after a cat, finally made it to the station - but no one was there (too early - about 4:30am at this point).
So, I decided to go back. The dog (as I expected) followed me. Nearing my kayak, there was a fisherman there (with the 2 cats that were chased, earlier). ‘Dog’ decided to stay with him as I went on to leave.
(hope the owner finds - I left notes in the local craigs lost & found and facebook lost and found)

I don’t know dogs, but this is what she looked like (though, no spot on head, did have large spot on hind quarter): 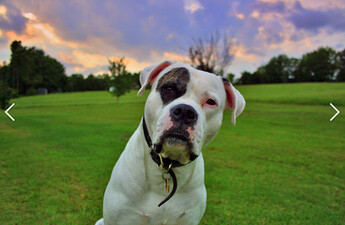 Great job, you did about all you could under the circumstances.

Assuming you are carrying “standard” seakayak safety gear, maybe jerryrigged dog preserver with a paddle float? And, then line tow the dog in with constant checking to see that the dog isn’t being towed under and/or that the "dog preserver has comed off.

At any rate, glad you made the effort and succeeded.

Use lifejackets for dogs in moving water. Get the kind with the grab strap on the back. You can get them back in the boat one handed.

Good job. It looks like a breed of dog that isn’t a great swimmer probably adding to the difficulty.

I don’t carry a paddle float (though, do agree that it is a valuable item to carry, if not for oneself, for others).
I use an inflatable pfd, and did consider trying to rig it up to the dog, but thought that I would be able to get to shore faster than I did. On reflection, it might have been a good idea to try. Thanks.

Use lifejackets for dogs in moving water

Wise tip. I wonder if the dog I found got away from someone who did not have him jacketed.

NRS strap across the bow.

The problem with dogs like a lot of swimmers (people) is that they don’t stay still. They wiggle around. Qruiser . … Pulls Abby, 65# retriever , up by the hand strap on the jacket and the dogs. stands on the center deck of the tandem. But Abby is trained, equipped and eqperienced.

Retrievers are water dogs. They can have mouth open carting a deck (@=/:# spell check…DUCK) and not drown. Stub nose dogs have problems breathing on shore.

Success will be dependend on the dog trusting you and remaining calm. Difficult with strange dog.

If you had a contact tow you could hook to collar and tow with head at cockpit front…short distance…but dog would likely freak. Unless it was tired. Necks on those dogs are increditably strong.

If I found a dog that wasn’t a real water dog swimming in the middle of a half mile wide river I would be looking for the capsized boater that lost him. Or the person that tossed him off a bridge. I know current could have got the best of him and taken him out but it sounds like something that wouldn’t happen very often.

If I did come on him as the OP did I would spend a really long time getting him used to me and allowing to rest with my help talking to him and making slow demands on him. I think the OP did the right thing not trying to get him on the boat and just helping him in the water and using the current to move to shore.

Many years ago we had a real large black lab and I had him down on Lake Erie in the winter playing fetch on the shore in the snow. I have no clue but he decided to go out on the ice and fell thru. There was no way the ice would support me and he was facing me and trying to climb out. Instead of climbing out he was like a ice breaker and snapping off a couple feet with each attempt. I kept calling him and he kept breaking ice until he was within reach if I was knee deep in the ice water and I went for him and yanked him out. He shook off and the goofball ran over and got his ball and dropped it for me. I had a mile walk home with soaked feet and he was just happy to be walking along.

Last winter a friend of ours died in his farm pond when his two dogs fell thru the ice and he ran and got his kayak to go get them. No one else was there and they figured the dogs tipped him. They found all three of them the next day.

When it comes to dogs and rescue you have to stay thinking and not put yourself in dire danger.

If I did come on him as the OP did I would spend a really long time getting him used to me and allowing to rest with my help talking to him and making slow demands on him.

That half mile river has a lot of traffic and a tide race that has put me past the The ship yards at 5 mph drifting. You just don’t have a lot of time hanging out in the channel.

Definitely a good deed and well handled given the stated circumstances.

I love dogs but am extremely wary of any animal in distress. As with a drowning person, they’re likely to be unpredictable. A bad bite from a large dog while paddling in the river described (tide running, boat traffic) could be bad indeed. Seems to me like the suggestions of crafting a pfd from a paddle float or strapping the dog to the deck are more likely to result in a bite, capsize, or entanglement that what the OP did, not to mention wasting rescuer energy. A dog not used to being restrained will resist unless totally exhausted. Maybe if it was so exhausted that it would lay across the deck dead weight that could work, but strapping it down seems iffy. I’d consider a leash to guide the dog, but seems to me like literally towing a dog, especially a tired snub nosed breed, could easily lead to drowning it.

The problem with dogs like a lot of swimmers (people) is that they don’t stay still.

Yes, this was a big part of the problem I was having. The dog kept trying to go in the opposite direction.
I was using the collar, but it came off.

yep, I was thinking it was going to be the dog or me as my arms were getting mighty tired (holding dog in one arm, paddling in other)

extremely wary of any animal in distress

yes, and I was really not convinced it was a ‘friendly’ until on shore when, after running away, it came back and followed me as I walked to the fire station
Next time (hopefully will not be one):

I don’t carry a vhf on my (short) daily paddles (though, in this situation might be good)

Another thought - breaking down a two piece paddle, it would be a lot easier to paddle with one hand, holding down by the blade.

I carry a telescoping single blade paddle as a spare sometimes, the kind you find in the motor boat section. Can’t really get any serious mileage on it, but it’s very easy to use with one hand, and can get to shore in a pinch (without strong opposing wind or current). (More often I’ve used it in swamps and mangroves too dense for my 220cm single-piece paddle.) Using half a two piece spare would accomplish similar.

That is a good idea but if its not your dog, not practical. Its hard to have the appropriate size jacket on hand. I think Raisins did a great job especially with a bulky bone dense pitty.

This involves risk, but you might have been able to reach your rear hatch cover and pop it off giving the dog the hatch rim to to try to latch onto. Of course, if successful you’ll end up with an unpredictable dog on board along with an open hatch.

A dog thrashing in the water is hard to handle. I would be tempted to put a noose around his neck if it would save his life.

It took 2 boats to get our 40# poodle back on my SOT. The other paddler steadied my boat as I pulled her aboard. She had on a PFD with a grab loop on it.

So glad you were able to save him. I hope he was able to get back home.

Great job. I know that area and those currents can get bad along with some big boats. I carry a kayak ladder strap for others to use for self rescues and that might have been helpful getting around the dog to help keep him afloat while you paddled. Hate to think someone just dropped him off a boat to drown.