How has the coronavirus COVID-19 affected your paddling?

It seems inevitable we will have lots of cancelled events now or in the near future. Has the hysteria, altered your plans or events; in your area?

A regional paddle club, has cancelled their annual symposium. They have cancelled club paddles, for the foreseeable future.

I was supposed to go surfing, next weekend. The organizer, has pulled the plug on that, as well. I still plan to paddle. I was looking forward, to getting back in the surf.

I asked my regular paddling partner if she was ready to get out and her reply was not positive.
I started to explain that we weren’t touching, nor riding together but didn’t bother.
If that thing is contagious in open air, we’re all infected.

Nothing so far. I’m expecting that an event this coming Saturday will be canceled allowing me to go out on a club paddle. Small group & easy enough to keep a 2 - 3 meter distance. Pool sessions are cancelled around here as the schools are closed. I can understand cancelling a symposium style event though, hard as it is.

More paddling. I’m married to my paddling partner and driving to remote areas and paddling around sound pretty safe to me. (And we live in a remote area to start with.) Just need to water to warm up, some is still solid!

Oh, but we did cancel our “drive someplace warm trip” so yeah, it has affected it.

TRAQS; the Greenland gathering in Florida, just postponed their event. It was scheduled, for the end of March. Canoecopia cancelled their big event, all together.

Winter hasn’t ended here in northern Michigan, so it’s too early for decisions relating to summer symposiums or other organized paddling events. Some event calendars aren’t posted until May.

The AuSable River Canoe Marathon is still on the calendar for July 25 - would be devastating for the small town of Grayling if that gets canceled.

Local outdoor and boat shows scheduled this month have been canceled and a local major ski resort is shutting down their slopes and hotels this weekend, although there’s plenty of snow and they normally stay open through Easter.

Wish I could get out and paddle but still too much ice and I’m hesitant to visit a nearby river as we’ve had high winds for the past few days. As a solo paddler I’m leery of strainers and such.

Between Qruiser and I we led groups the last two days. I expect the RV club rally at the fairgrounds next month to be cancelled since fairgrounds cancelled dog events this month. Cancelling an RV group paddle.

Have a canoe club paddle scheduled next month that will likely continue. Paddle with some travelers going to TRAQS pending. Since schedule opening up might paddle more.

Reservoirs are thawing out, with a fair amount of open water in the small one closest to me. But I won’t go till the the water is not so frigid anyway, and my favorite place is still closed to boating.

Should be going fairly soon, though. No paddling groups here makes it a moot point for me whether to gather or not.

On my daily paddles, no change.
On yesterdays club paddle, it added an item to talk about on our paddle.

Went out yesterday. There were very few other paddlers on the water, so it has affected the mentality of quite a few people, there would normally be forty or so people on that stretch of the river.

No hysteria, lots of caution. I am not doing any paddling that requires a shuttle, avoiding as much as possible being in close proximity to others.

The eco-action waterway cleanup meet up group I belong to has cancelled all events until further notice.

Since other activities I enjoy, like theatre, have been cancelled, I’ll probably be paddling even more than usual. 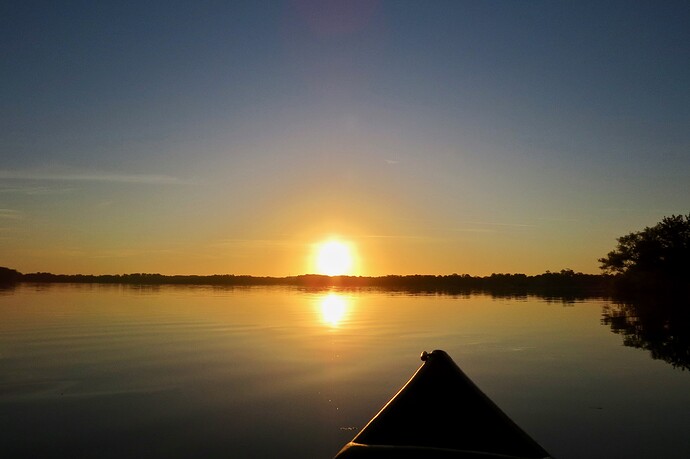 I’ll be doing the “4 B’s”: boats, bikes, bows, and beer. Just not in social situations. Probably means I’ll do more of all of them than normal when it’s above 50 degrees.

Well, there is, of course, the Canoecopia cancellation. But it is early for any paddle outings that would involve a shuttle in a crowded car or van so, for now, paddling itself seems pretty much unaffected.

But last week a long time member of our local paddling club passed away and there was to have been a memorial gathering this week. Under the circumstances, I doubt that it will come off and if it does it would probably be unwise for those of us who are on the sunny side of 65 to attend. We sure don’t need any more club members getting ill or risking it. Which is a shame - he was a good man, a veteran and firefighter. It seems wrong not to go and it seems wrong to go.

I sure have sympathy for the many Canoecopia vendors and speakers who were no doubt loaded up and probably on the road, having made a considerable financial investment in attending, and who are now no doubt left wondering what comes next. The Pcom folks are among them, as are the folks at Rutabaga. This show represents a massive investment for a paddle sport shop, one that is made in good faith for the benefit of paddlers everywhere in the mid-west. It’s not coming off could be a major hit. Many of the vendors are mostly relatively small businesses who may not be well able to absorb losses. I have sympathy for them. Let’s hope it works out OK for them all.

Can the memorial be rescheduled for a later date?

Don’t know… Its sure not up to me. More, as they say, will be revealed. No body is going to forget him, at any club meeting, paddle outing, or paddle/camping trip campfire. But I’m also sure, if he were still here with us, he would not want to put any of his friends and fellow paddlers at risk of illness. Don’t you just hate it when doing the right thing - unquestionably the right thing - still leaves you with regrets?

Not at all. I am primarily a solo paddler.

Oh, yes, I do hate that. Caught between a rock and a hard place.

Well pool sessions canceled due to the YWCA closing all programs.

Long Island Sound water temp is in the 40s. However I had friends that went out for a paddle today. Next nice weekend with no wind I will be putting on the drysuit and be out on the water. A few more weeks I guess. The virus well cant think of a safer place be than out on the water. Just saying

Yeah, out on the water is the place to be. If a virus catches up with us there it would catch us anyplace and so be it.