How long is your winter layoff from boating?

I plan to get out on Sun. as it looks like the weather, water levels, and covid situation will make this possible. It will be 73 days between trips. We’ve had more winter weather here in wv than some winters, with fewer warm days on weekends than normal, and then some spread of covid at work so that’s made paddling less likely for me.

last paddle is around October, maybe September. first paddle is probably May, so about 6 months

Usually no more than two or three weeks depending on how weather and life/work get in the way.

Usually around 5 months or so

Down this way (FL), the more apt term might be ‘hurricane layoff’.
My last one was 534 days ago (Dorian), and the ‘dedicated’ paddler might have paddled that day. If I had, the number of consecutive paddling days would be 975.

Haven’t been on flowing water since New Years day +1 but we will be heading out for the annual AuSable River overnight next weekend. That will be maybe 54 days with land based fun.

Winter?? When I lived in RI and didn’t have a drysuit my last paddle would usually be late Oct/early Nov, and then I’d put the kayak away until May. With the drysuit I would paddle occasionally in the winter (the kayak shop I worked for did a Santa paddle in early December) and would start up again in March or April if the weather was nice. Now in Florida I’m more likely to take a break in the summer when the water temps are in the 90s and heat index is 100+, but usually that doesn’t bother me enough to actually not paddle.

I usually get out on the river every month. Last trip was 3 Feb but then it got cold. It’ll warm up into the 30s again next week but shore ice will prevent put-in and takeout.

Mother Nature has a big voice in it. Here in SW Michigan December was lovely, I got out a half dozen times in January which is unusual, and like kevburg fortunately got out once in early February before the cold weather hit. Looking forward to temps above freezing.

Depends on the weather. If there’s a nice day or two in the winter that’s on the warm side, I’ll go. That said, I had to stop in November because of a minor surgery on my lower back that was left open to heal on its own, and wasn’t able to even think about paddling until about a month ago. And by that time, everything inland was frozen solid. If there’s a warm day, I’ll head down to the shore for a paddle if I’m desperate.

Four months. In a normal year, ice usually starts to leave in late April. Sure would be nice to have an early spring and get things thawed out by mid-April.

No layoff here in middle Georgia. Usually get out at least once weekly. 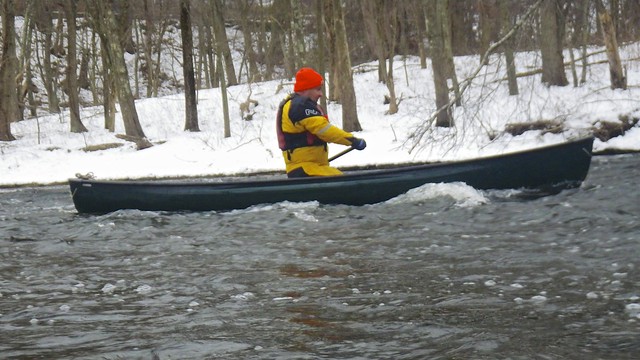 It’s not the cold or the ice that is keeping me from boating. There is plenty of moving water around here that can be run safely. It’s the shuttle - I haven’t started doing car shuttles yet, and bike shuttles in the cold and snow aren’t very appealing.

It’s a bummer, but hopefully it will be over by Fall and things will be closer to normal.

I could extend my season with a drysuit but very few paddlers here do that.

Summer around here is 2 months of bad skiing.

But seriously, if you want reasonable conditions paddling season is 5 months. If you can put up with (usually) very cold conditions you could stretch that by up to one month on each end. I do some paddling most October’s when I’m duck hunting, but that is it until May.

It depends on both the snowfall and freezing conditions AND on drought severity.

Layoff duration is normally about 5 to 6 months. Last year it was almost 7 months.

ZERO!! Dry suit! There’s no way I could get through months of not paddling. In fact I am headed out in an hour and it’s 18 degrees. And paddling is the perfect self isolation! Happy paddling

Zero. There are just tradeoffs. Winter has easy parking everywhere, and no swimmers to worry about at the beaches when launching and landing. But rinsing and hanging all the salty gear I don’t find pleasurable. About now I start to miss swim trunks, rash guard, and sandals in the place of drysuits, wetsuits, booties, hoods, socks, thermal undergarments, pogies, gloves, etc. And I can’t seem to manage to keep a drysuit neck gasket good for more than a single season before it goos up and forms holes. And I took such care with this last one. I find my wetsuits easier to deal with at the end of the day anyway as far as rinsing and hanging and being ready to go again the next day. And I end up with wet undergarments under my drysuit from sweat anyway. It’s nice to have a drysuit, but I’m finding over the years that it’s my wetsuit that I end up relying upon. Each is what it is I guess. I’m just grateful that I have tools to keep me on the water year round.