How many boats can you haul?

I’m not gonna lie, I’m pretty pleased with the trailer I built to haul our boats and bikes. This is a 5’x8’ folding utiltiy trailer I bought online, with custom load trees that I designed and welded. The bottom load bars are 7 feet long, and are outfitted with 4 sets of J-cradles. (2 sets of rigid cradles, and 2 sets of folding cradles.)

We currently own 4 boats, one each for me, my wife, and our 2 sons. The normal configuration is to load the boats on the J-cradles, with paddles, PFD’s, etc. in the Thule cargo box up top. We can also fit 2 bikes on each side of the cargo box, allowing us to travel with 4 boats, 4 bikes, and additional cargo on the trailer. It works incredibly well for camping trips and vacations.

This past weekend, we decided to rent the Eddyline Sitka ST and LT demos that I tried out a few weeks ago. We had 2 friends accompany us, and bring their vehicle for shuttle purposes, so I needed to be able to haul 2 extra boats. I whipped up a few custom cradles for our boys’ boats, yielding the 6-boat configuration shown here.

Of course, with additional J-cradles, I could eke even more space to transport boats, and with the load bars on the vehicle, we could handle even more. (The Traverse still only seats 7, though.)

How many boats can you haul at once? 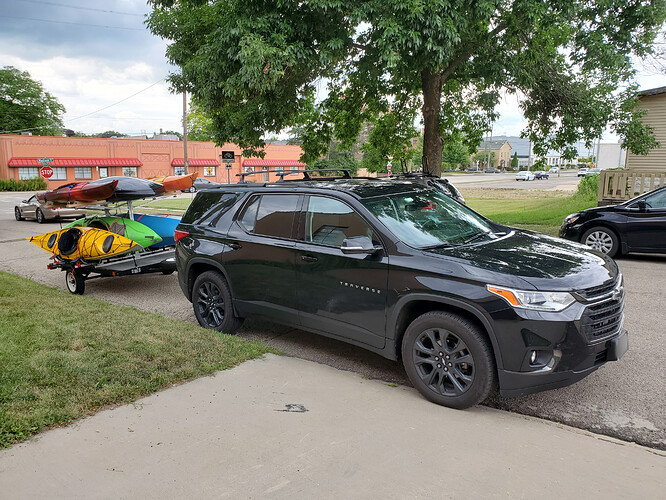 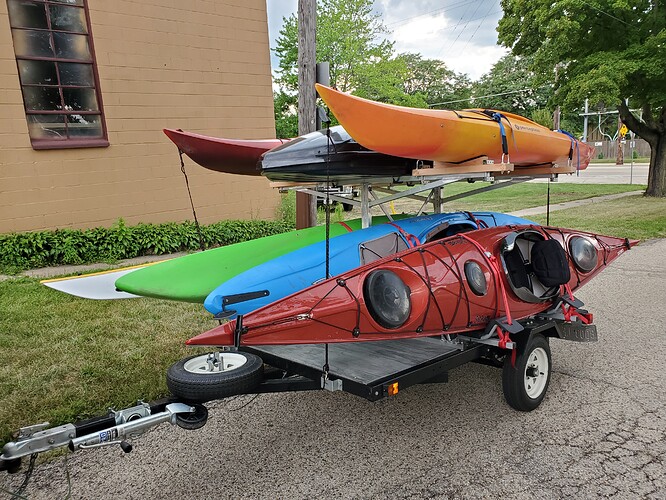 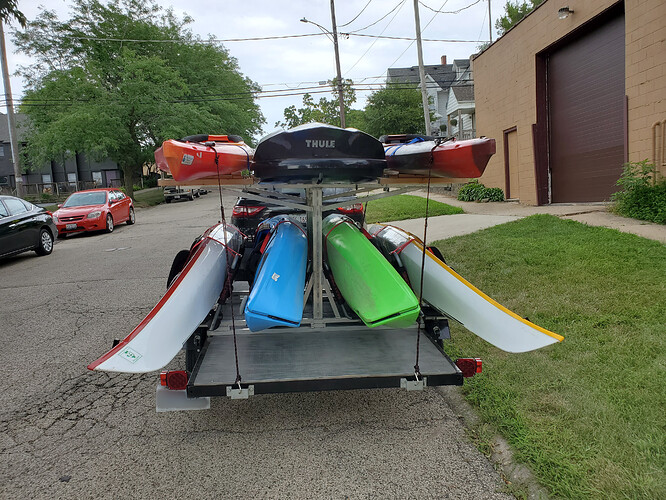 What do you think of the Eddyline Sitka LT?

I love it. It’s gonna be my next boat, hopefully next spring.

The 2 boats in the bottom center J cradles are my wife’s and my current boats, the Dagger Axis 12.0. That boat is fairly wide (27.5") and stable, with a deployable skeg for improved tracking. For the rivers that we paddle, it’s a good boat, but we’ve been looking for something that is a step up in performance.

The Sitkas definitely fit the bill. I find that they are more nimble than our Daggers, despite the extra length. (I chalk this up to better edging performance.) Being both narrower and longer, they’re obviously faster, and the fact that they’re lighter is also noticeable. (Less inertia to throw around when maneuvering.) At the same time, even with the skeg up, they seem to be better at tracking, and with the skeg down, they’re even better yet.

Initial stability is obviously a bit lower, owing to the narrower beam and shallow-V hull, so it definitely feels more lively, but I see that as a good thing.

I also like the fact that the Sitkas are fully outfitted as seaworthy touring boats. (Dual bulkhead vs. just a rear bulkhead on the Dagger, full perimeter lines, etc.) The LT also has a small day hatch just forward of the cockpit.

I’m 5’-8", 180lbs. I tried both boats, and while I fit in the ST just fine, I found that the LT allowed for a more relaxed position for my legs, which I found more comfortable.

My trailer is configured to haul 4, but also has a large locking storage box. I could put another on without too much fuss, and possibly 2. I could also carry 2 on the roof if necessary.

Without doubling up, seven . Three on the truck rack and four on the trailer.

I can carry 5 on my pickup. Three on top with extended bars and 2 in the bed with an extender. And a good sized gear box.

8 tripping canoes on a commercial trailer. we borrowed for a trip to the lower Colorado River.

4 canoes on the trailer and 2 on the racks. The trouble is not all access is trailer friendly. often on ditched logging roads some 140 miles from any pavement . Pick the wrong logging road and you are screwed. Back up some five miles or so. Been there done that

Nice job on the trailer! We’ve hauled four to six boats with our setup. I can only seat six people in the truck, so I didn’t add a second tier to the trailer. In addition to the roof racks on the cab,I tend to use either the trailer or the bed of the truck, never tried to use both at once, I don’t think it would work.

@kayamedic, I guess that gives you a lot of practice backing the trailer, or something? I actually pride myself on my ability to place that bad boy exactly where I want it.

Fortunately, the vast majority of our paddling is in Northern IL, and access is pretty well-developed everywhere we’ve been. (This is our fifth season with the trailer.) Aside from all the local paddling we do, we’ve done a handful of vacations to campgrounds and VRBO’s in WI, and haven’t run into any issues there, either (knock on wood).

@tjalmy, thanks! It’s drawn a fair amount of interest over the years. We had a group eyeing up our trailer setup this weekend. They were cartopping 4 kayaks on 2 cars, and were definitely interested in our rig. I absolutely love the simplicity of having cradles down low on the trailer vs. heaving the boats up to cartop them.

One thing I did do when I built the trailer was I replaced the tongue. The original was just a bit too short for my liking, even with just our 12-foot boats. I didn’t want to run the risk of a bow contacting the rear of the vehicle when backing at tighter angles. So I ditched the included U-channel tongue and replaced it with a longer square tube.

Not! The trailer is mostly for canoes that are used in civilization. We use shuttle services when needed up north as the shuttle one way is up to 150 miles of bush road. You do at most 30 mph. Were we to self shuttle it would take an entire day
I like that your supports front and back are close making crossbars closer together Ours is a commercially made trailer and with crossbars some eight feet apart taking rec boats is a challenge.

Yeah, my load trees are 33" apart. This was driven mainly be my desire to be able to use the Thule cargo box. This is about as far as I can spread them, and still accommodate the box. This entire setup is able to be broken down, as well. I set it up once in the spring, and leave it deployed in the third stall of our garage, but I hoist the boats and cargo box, and fold the trailer during the winter. Here’s a pic of everything stored at the end of the season. 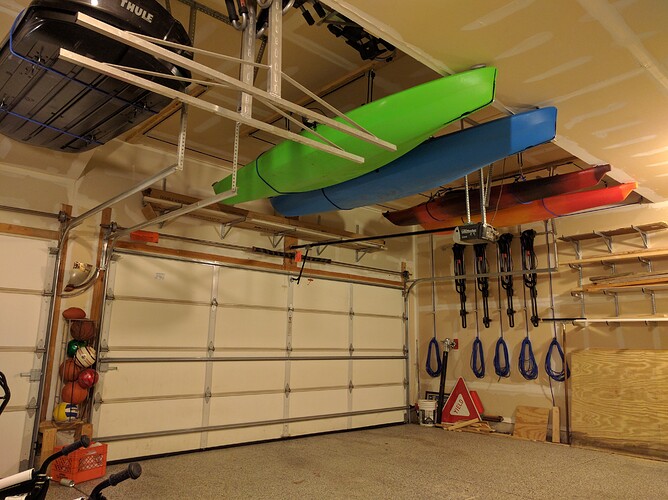 In the pic, you can see the cargo box and boats hoisted, and the load trees are hung from the ceiling as well. On the wall in the background, you can see the 4 bike racks, as well as the 5 coils of rope from the 5 homemade hoists. The trailer itself is folded and stood up against the wall next to the single garage door. 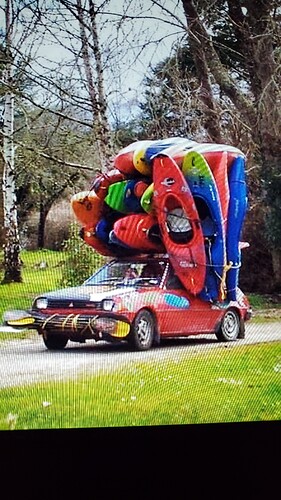 Apparently this cat has everyone beat!! Lol

And by the way… if anyone actually knows who this is…please send them my info to contact me… i would love to hang out with him/her!!

You think he’s shuttling people, too, and there’s 16 people packed in there like a clown car? 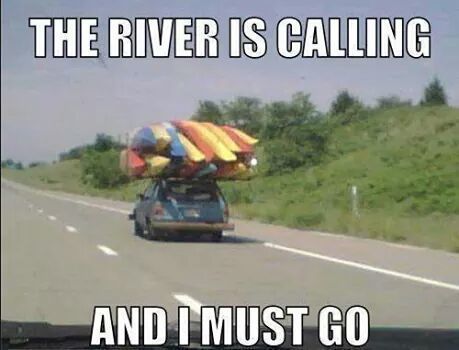 I am so impressed by your abilities to transport a lot of kayaks. I only have room for one.