how much force to paddlers take when going over ledges?

I’ve seen some pretty huge whitewater, including waterfalls, paddled by people in playboats, creek boats, etc. I was once told years ago (maybe incorrectly) that going over a ledge of 3’ while sitting in a canoe can break your back. Now, creekers are kneeling, but I’d imagine that their bodies are taking quite a beating going over little waterfalls, etc. I’m asking the same question relating to kayaks, also. So, what do you think?

Unanswerable question. Depends a lot on the health of your bones. I have seen people with compression fractures from just moving wrong…
Falls over 10 feet are usually the baseline for spinal precautions in EMS.
Knees act a bit as shock absorbers… When you are sitting shock is transmitted right to your spine.

Judging from the YouTube videos being posted by kayakers, there are a lot of kayakers who run 40-60 foot waterfalls routinely, and much bigger waterfalls frequently. And it is no longer enough to run straight over a waterfall; in an effort to get style points and better video footage, many kayakers now routinely do various cartwheel maneuvers as they go over the lip. Do a YouTube search for “Kayak Waterfall” or something similar, and you’ll see what I mean. The highest waterfall run by a kayaker is Palouse Falls in Washington, 189 feet high, which was first run by Tyler Bradt, who I’ve known since he was a kid. All this waterfall running seems like a horribly bad idea to me, since a slightly missed line or a miscalculation of the depth that a kayak will penetrate at the bottom could result in a kayaker being smashed to smithereens. The studmuffins of international kayaking are taking their lives into their hands every time they run a waterfall. But the fact remains: it is definitely possible to run very high waterfalls with no injury whatever. Not a good idea, but definitely possible.

The waterfall runners are taking a lot of force when they hit, the trick is not to land with the hull flat but to drive through with the bow and keep your body on the front deck. Does not work out that way though. I have a friend who in his late 20s and 30s was making all kinds of over the top extreme kayaking videos. He just turned 40 and has had two back surgeries. A lot of the waterfall runners are going to have real bad old age issues.

running ledges or waterfalls is often called “hucking”. I’m not a huckster although it would have been appealing to me when I was younger. Ii did things like take the kayak off the high dive when I was young. Fortunately, hucking wasn’t a popular thing in ww boating when I was young, so we used to talk about baby falls on the Tellico but that was about the only waterfall we heard about, and that’s small by today’s standards. I’m beat up enough, glad I didn’t run waterfalls!

Now, I sometimes man the video camera while others huck… I don’t run anything higher than the length of my boat- I just don’t want more impact on my joints, I already hurt enough. Fun to watch others but have no desire to do. One local 20’ waterfall (Mill Creek WV) has had at least 5 serious injuries occur- compressed vertebrae, shattered elbow, broken ankles, spinal injury- most of the injured were far better paddlers than I am. On the other hand countless people run kanawha falls (kanawha river wv) in all variety of craft and I haven’t heard of any serious injuries occurring

Answer is “it depends.” As kayakmedic said, and older person or one with osteoporosis can sustain a vertebral compression fracture just falling off a curb, or less. A lot depends on how the boat lands. On a drop of any height, you really don’t want to pancake the landing.

I have run many ledges over 3’ in height many hundreds of times in both kayaks and canoes and I do not recall feeling much force transmitted to my spine. I have also run Baby Falls (12-14’) a number of times in canoes and kayaks. In a whitewater canoe you kneel, and going over a drop like that I would rise up off the saddle and allow my legs to act as shock absorbers, something you can’t do in a kayak. In a canoe I do recall at times feeling a good deal of force on my knees when landing in a canoe, or on my feet when landing in a kayak.

But you can certainly break your back running big drops. In 1989 Corran Addison ran 85 foot high Looking Glass Falls in North Carolina in a borrowed fiberglass kayak, wearing a Batman costume (I guess it was a slow day). The depth of the water in the pool was only about 5 feet so he surely did not want to pencil in. But I guess he pancaked because he broke three vertebrae and spent the next six weeks in traction. 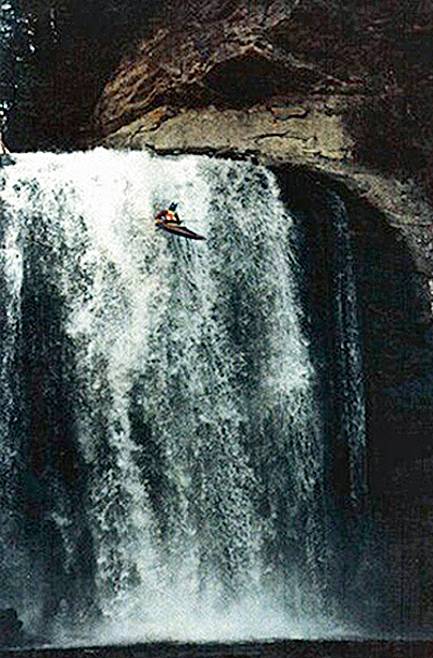 many variables go into running drops. depending on the depth of the pool and level of aeration, you can land pretty soft even from high drops. i’ve run things over 30’ that felt like nothing and drops less than 10 that jarred me. but the reality is that with good technique, drops in the 50-80 foot range can be safely run with regularity.