How much harder is a roll with a bigger kayak?

I did my first few rolls in a tight SOF and a Tahe Greenland. How much more difficult do you think it would be for me to roll my Impex Montauk? I weigh about 130. Just want to know what to expect when I practice this weekend. Thanks.

Different boats definitely can be easier or harder to roll. The fact that one is larger can matter, but I find it isn’t as big a change as one would think and larger boats can often be easier to roll. For example, a loaded for a trip single often rolls easier than the same boat empty - once you start it rolling from upside down to right side up, the mass just keeps going.

The fit of the boat makes a bigger impact, and that is an area you likely will see a large change between the Greenland design boats and the somewhat British design Impex.

Thanks. I’m still new enough that I don’t fully understand everything you said, but I guess trying it out will give me first-hand experience.

The Montauk (hull) is not difficult to roll, provided it is outfitted well to fit you. (Montauk is one of the boats I had.) Primary reason a SOF rolls well is that, in addition to being low volume, it is fitted (built specifically) for you in a way that a factory boat is not unless/until you outfitted out with foam.

Once you get your rolling down in the SOF and Montauk and you begin to try other seakayaks, you’ll notice that most SINKs will roll provided a good fit because there arent really drastic differences in hull shape. If and when you move to a WW boat, especially playboat with sharp chines and boxy sides, you’ll notice a “hinge” effect in the roll. But it’s not more difficult , just a different feel of when the hull decides to go over.

The more different hull designs will come with surf kayaks and, especially so, with waveskis. Here you have minimal or no sidewalls at all. Instead you have sharp rails (the more drastic version of “chines”) that are designed to “cut” into a waveface. These crafts want to be either rightside up, or upside down. If your technique is off, you won’t get past the critical point of rolling past the rail or resistance point. If you succeed, the roll ends with an “plop” like feel and the planing bottom hits the water. It’s very unlike rolling most SINKs where you can actually feel the hull “rolling” as you sweep with your paddle (or throwing stick, or hand).

The key point is that the Montuak is not harder to roll than your SOF, provided good outfitting.

OK, thanks. Just to be clear, by good outfitting you mean it should be padded out to fit my body well, right? As of yet I haven’t done this, because I haven’t needed to yet, but I do have a bunch of foam that I imagine I can stuff between the cockpit and my thighs while practicing. I just need to have good contact with the top and sides of the hull, correct?

I’ve thought about that rolling while loaded, something I plan on doing since I spend a lot of time w/ a loaded yak, and I’ve wondered if anyone has some tricks for when you’re “not” fully loaded.
Say I was going out for a long day and had loaded some basic survival/safety stuff in the hatches (beyond the real important things that live in my PFD) but they were by no means full.
I just imagine my stuff tumbling about like it’s in a dryer if I did any rolling. Or do you just do it so fast that the centrifugal force keeps everything pinned to the bottom?

I imagine I can stuff between the cockpit and my thighs while practicing. I just need to have good contact with the top and sides of the hull, correct?

You have to make sure the foam is “in place” with either glue or duct tape. If the foam moves as you roll, you essentially lose contact and the transference of our rolling energy to the hull.

I just imagine my stuff tumbling about like it’s in a dryer if I did any rolling. Or do you just do it so fast that the centrifugal force keeps everything pinned to the bottom?

My kayaks generally have float bags (or big foam pieces) in the the hull. These provide flotation/displacement protection in the contingency of a damaged hull and/or bulkheads. (Have actually had that happen with a surf kayak when I damaged the fin box surfing over a boulder. The boat never sank but I notice the cold feeling of water sloshing around in the hull.)

The float bags are also useful in pinning gear in the bulkhead in place. Without the float bags, yes, you will have gear banging around. No, I doubt anyone can roll that fast to have enough centrifugal force to pin internal gear in place. (Greenland rolling technique usually involves slower, deliberate action.) If you were able to generate that much force/speed, you would likely keep rolling over and over, like certain surfing situations. That is aptly called “Maytagging.”

And “Maytagging”? I thought it was “window shading.”

Once you learn the mechanics and develop some muscle memory, most anything can be rolled. Main thing is not to rush the roll and maintain technique. A wider boat will be slower coming around, and you need to slow body and blade movement.

I rolled this Pungo 140, only a few weeks after completing my first rolls. My first rolls where done in a P&H Scorpio LV. In the years since, I have rolled a few rec kayaks, SOTs and folding kayaks. Main thing with rolling bigger kayaks, is not to rush the roll. Pungos, Rec boats and bigger sea kayaks may feel like slow motion coming around. 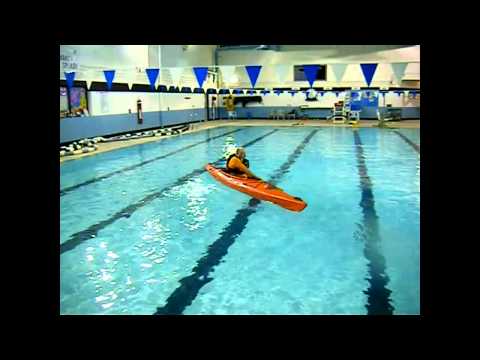 I was already quite slow in a narrow boat so slowing down shouldn’t be a problem for me!

Montauk is still a low volume boat, as long as the fit is good you should not notice a big change. Note that the Butterfly Roll can be a slower roll than a sweep to C to start with, so I would not suggest you get overly involved in worrying about that.

The one thing that you may notice is that the boat is likely a bit deeper than either of those boats they had you in. So you may notice there is a miniscule longer time spent between initiating and your head breaking the surface.

As far as fit goes, pretty straightforward. The more immediately your body motion is transmitted to the boat, the more readily the boat moves thru its motion. If you have to move inside the cockpit to establish contact with the thigh braces, or if you are squirreling a lot side to side as you go thru the motions, you will have to take the time to manage the excess motion.

But if you are set well in the thigh braces and the rest of your body is doing things correctly, a bit of side to side motion is not going to be especially noticeable or at all. Because your contact points especially coming off the back deck will be concentrated at the top of the boat pretty much throughout.

Bottom line is that all you are rolling is the bit around your hips. If that keeps going the rest of the boat does not have any choice. It has to come along. If the volume is relatively huge it can kill things. But the Montauk is not.

Wider beam make it harder to roll. Flatter bottom is also harder. Length does not matter much.

Because your contact points especially coming off the back deck will be concentrated at the top of the boat pretty much throughout.

Thanks, Celia, I understood everything you said except this part.

I did notice my hips slopping around in the Montauk when doing bow dips, so I think trying to get a little snugger in there would help.

Thanks, ppine, the boats I rolled are longer than mine and a few inches narrower and a bit less deep. I think the bottom of the Montauk is pretty rounded so perhaps that will help.

You are coming off the back deck, right? Fully upside down the PFD will tend to float you against the deck. As you move you will still be on the back deck since your legs under the thigh brace hold you there…
In a roll that starts forward facing, usual challenge is to get your torso closer to the surface because tendency is to get lazy and drift down a bit.

I was taught to tuck forward and dive headfirst, because I was actually having trouble getting the kayak to capsize all the way. Then I came out to the other side and opened/ arched into the balance brace before sliding up onto the back deck.

Ok. That is also an approach but is not what I was taught as the basic roll that I thought you were talking about.

Butterfly is usually more of a Greenland thing than traditional Euro approach. In my classes there, they sent us to the back deck, facing the bottom when upside down, then sweep the GP forward while rotating correctly and you pretty much have to come up.

Going thru the Balance Brace as a preamble to rolling is not something that is super commonly taught because a lot of heavier folks, like guys with a lot of their weight in the upper body, struggle to do a balance brace. That is simply not a practical solution unless you are someone - usually a smaller woman - who finds the balance brace an easily attained position. Your PFD is floating a heck of a higher proportion of lot your torso than for a big guy.

It also requires a certain degree of flexibility that many might not have. Honestly, if I want to count on it these days I have to account for finding a deck line to grab to get the arch. I would not want to rely on that in a messier situation.

Yeah, I think they taught me that one because the balance brace came fairly easily to me - I’m relatively small and flexible. It’s close to a hand roll from what I understand. I’m guessing the layback roll will be next.

Yes, layback is what most would call a more typical first roll. Or a sweep.