How much is our 15 foot Kestrel worth?

image3998×1126 1.42 MB
We have a 15 foot Kestrel to sell. It’s around 10 years old I think, one of the yellow ones. It got used maybe 5 times and has always been stored hanging in our garage. We can’t find any paperwork so no idea what we paid originally.Also has a Bending Branches paddle.

What should we look to get for it?

I don’t know the answer to your question, but I sure like the looks of that paddle.

They are about a grand new… and a very nice rec boat.
Does it have the rubber hatches which are very good but $ to replace?

I think it looks like the hatches are there, I’ll have to get a ladder out tomorrow.

Whatever it’s normally worth, it’s probably on the higher end of that now, since a lot of people are looking for ways to get safely outside.

This looks like the Kestrel 140, actually a 14’ boat. If so, it should have both a bow and stern hatch - a good and important feature for a rec kayak. It is ~26" wide and weighs in at ~55 pounds. They have a MSRP of $1999. In our area there is a glut of used kayaks on the market and they aren’t selling well. If it is in pristine shape (e.g. no hull deformation from storage), it might get $600 in our market here and not likely more than that.

You are correct; I see that the MSRP is $1049 for the rotomolded version.

In general (ignoring the specifics of your boat for now), you should be able to get 1/3rd to 2/3rd of the boat’s original price on the used market for a working boat. Newer, better shape, etc puts you toward the higher end, older and more beat up toward the lower. Throwing in extras like paddles and such can add a little (but much less than half of the accessories’ new price, probably more like a quarter).

The Kestrel is a very nice Rec boat.
Years ago I won a 120RM at a kayak race and decided to put it on EBay. After all what did I want with a rec boat? Thought I had to paddle it once just to say I did… It paddled so nice I kept it. .
Fast forward to 2017 and Hurricane Irma destroyed it. A year later I thought about another rec boat for little paddles. I went to the local kayak shop and saw an orphan old stock 120 composite at a great price and now I have great new old stock Kestrel that is just great. 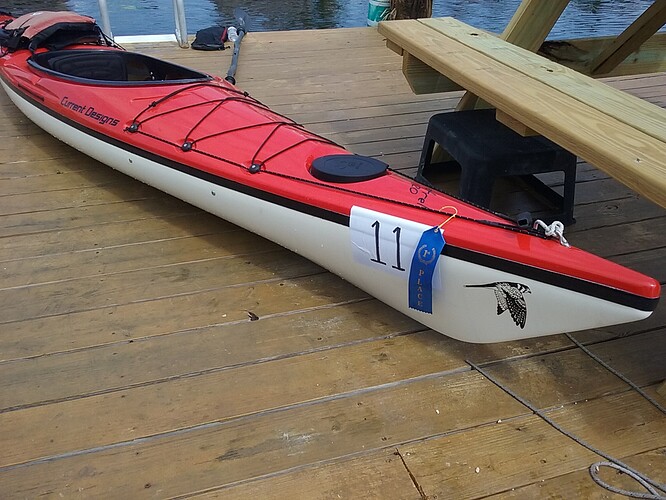 New, with the Revolution seat, they’re listing at $850 or so, a ten-year-old used one in good condition but with a non-adjustable seat would be in the $250-350 range, fair market value, if you can find the buyer who understands that a 12 foot, 25" wide kayak is a better place to start than a 9 foot, 30" wide rec boat from a home improvement center.

What State are you in. In Minnesota, it looks like anywhere from 400-650 for anything similar