How old is too old for buying a kayak, need some advice

Ok , folks need some guidance, I am in search of a 3rd kayak for open water , Delaware bay mostly, I will not do trips in it and I am a newbie , weight is not an issue as it will stay at my shore home, now my question is as I have been searching for used ones on FB marketplace I saw 2 that may interest me a a Dagger 15.5 Baja and a 17 ft wilderness tempest I think, both are older the dagger is 20 years old, the wilderness is old but no idea the hatch covers match the boat which I do not see as their current design. I have a riot 14.5 so I am in no rush but it got me thinking how old is to old to buy a yak, I know price is a deciding factor , both are under $700 but has there been a lot of upgrades in the last 20 years? Would I be better waiting for the market to correct itself and buy a new $900 kayak, like a feel free Aventura for example brand new? Any why do folks do such a lousy job describing their yaks when the sell them used.

To get you in the door. Why do used car sales scream their ads at us?

Shop around you can get glass/composite boats pretty cheap if you know what your looking for.
I got a mint P&H Capella for $650, the ad title just read
“Kayak for sale”

Age itself should not be a determining factor, more so how it was used , stored and maintained.

As an example, this spring we recently sold my wife’s Necky Looksha Sport and it was approx 20 years old. It was in very good/excellent condition. It was always always stored indoors and treated well when used, and it was used a lot. There was no degradation due to age, aside from the bungee cords, which were replaced last year, even the neoprene cockpit covers were like new.

That said, on real old boats (likely not an issue on these two), you may find that they don’t have bulkheads and hatches. When sea kayaks first came out, they often didn’t have these. A bulkhead sealing off a compartment may be sold as dry storage for trips, but it has a huge safety benefit of being flotation that won’t fill with water when you capsize. I would avoid any boat without front and stern sealed bulkheads. Requires added gear and different rescue methods to bring them up to the standard safety level of current kayaks - leave these for those who want to deal with it.

Only in the late '90s or early '00s did deck lines become standard. It is quite possible these boats don’t have static deck line (non flexible lines running along the sides at front and back of kayak). These aren’t too hard to add, so buying a boat without isn’t a deal breaker, but you should add them to the boat (at a minimum at the front to help someone who is performing a T-rescue on you).

I do find more recent seats more comfortable, particularly from companies with white water heritage (like Dagger and Jackson). And newer boats often have larger cockpit openings (but not so large they can’t get a good seal with a skirt), which I find easier for getting in and out (I often end up sitting butt down in seat and folding legs in, which I can’t do with smaller cockpit opening). At this point I wouldn’t want to go back to an older boat for these reasons.

Do take a look at the boats and look for signs of severe aging in the plastic. Compare color between some spot not exposed to sun and the areas exposed and see if the color is very different. Look inside hatch versus outside, or under straps that hold hatch on if they are normally kept closed. Aged plastic becomes more brittle, which means it could crack with a hard hit. Aged plastic really can’t be repaired - the plastic welds don’t hold. 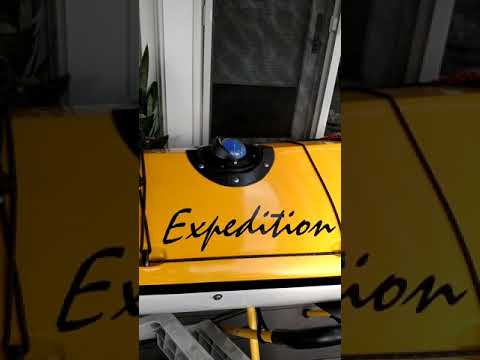 Expedition not Exposition as my dumbass said.

4 others same age all 900 same condition or close. You have a kayak now don’t panic. My limit is about 5-6 hours each way to get one.

Buffed them up and updated pedals.

The kayak design depends upon how skilled you end up becoming in a kayak. You could deliver a new Aventura kayak to me along with a 20 year old Tempest, put me next to a small sheltered lake and a twisty flatwater river, and I would likely very rarely have any interest in paddling the Aventura. The reason is that the Tempest would be entirely comfortably stable to me, I would experience no frustration maneuvering it, I could travel faster in it, and it would perform better for me traveling through rougher water. The performance would be more pleasing to me probably in every way. The boats will offer a very different experience to a paddler who has developed some sea kayaking skills.

This past winter on an occasion where I just joined in a group paddle, we had left in the calm morning, paddled out, and were in the lee of an island. Paddling back, the expected wind had picked up, and once out of the lee and back in the wind, there was considerable chop. There was a person paddling a 14’ Pungo. I remember the rest having sea kayaks similar to what a Tempest would be. We were quite patient, and probably allowed close to an hour, after which we had covered about a quarter of a mile, and didn’t seem to be moving at all anymore. The paddler was doing his best to keep on a good face, but I figured he had to be getting tired (along with another member of the group actually mentioning fatigue), and if he or anyone else lost their ability to keep their balance due to fatigue, that would put us in a whole different state of affairs. So I just paddled up and explained I was worried about folks getting tired paddling out here without making any progress, and I was going to do my best to assist in our progress. He agreed this was ok.
Towing a sea kayak is always a challenge. Towing a Pungo through this chop was a whole new level. I was doing race pace effort for the next, I don’t know, 2 hours I suppose, to slowly crawl back to our destination. But we all made it back with smiles. I was actually worried that I might have injured abdominal muscles - almost sharply sore by the end.
So here’s the thing. I was perfectly glad that this person was in the Pungo, because for as much as that thing could get pushed around by waves, it was providing all the stability that person needed to stay upright. A person not able to stay upright, setting up a rafted tow, was certainly not going to help the situation. So you count your blessings. It was a case where that person didn’t belong in those conditions, and that boat was really no good for those conditions either.
I wouldn’t have suggested to that person to get a different boat. He knew he had gotten in over his head, and seemed to understand that both himself and his boat were not a match for that venue. He was a very pleasant and enjoyable person. He never played victim. He never allowed his spirits to dampen. He expressed much appreciation. He was happy to discuss everyone’s understanding of the situation after the fact. All ended on a happy note.
Delaware Bay is sea kayaking. You have to decide what type of sea kayaking you figure yourself to fit into. If you become quite skilled in a Tempest, the other kayaks, even in shiny newness, will lose their luster. They won’t offer any advantage to you. If you don’t end up very skilled, they all may have a place, and offer distinct advantages for you as a paddler. For example, if you get beyond daring to edge your boat, and get to the level of just comfortably and naturally edging your boat, the Tempest maneuvers well. If your edging remains tentative, your kayak stays mostly flat, and your maneuvering strokes remain somewhat tentative, you may find significant maneuvering advantage in your Riot or an Aventura.
It’s always fun to paddle around in different boats. So there’s nothing wrong with appreciating the differences between your Riot and an Aventura. The Tempest will add potential.
With plastic kayaks, I think sun is the killer. I would want to check a badly sun-faded kayak for brittleness. I’m not really sure how long a cared for plastic kayak retains it’s usable sea kayaking properties?

As others have said, depends on how the kayaks have been maintained…especially with regard to the sun if plastic/rotomold kayaks. Last month I picked up an 18 yo Tempest 170 RM just to have an extra sea kayak because it was a fair price. Age is not as important if the basic safety features are there, i.e. hull integrity, deck lines, compartments, functioning skeg.

Condition not age is the determining factor.
Recent advances? I would paddle a skin on frame with a greenland paddle with an ear to ear grin (and will when I get a skin on frame)
More modern doesn’t make something better. I have old kayaks and I have a light weight Epic I bought last year. They are all great and all have their place.
As for waiting “for the market to correct itself” and buy a new $900 boat, you are going to get a far better used boat for something like $600 than any new boat in the $900 range.

Thank you all for the great points, The wilderness 17 foot is a Solution 2 xl, I just found out. I am trying to educate myself so I will have a better idea of what is good condition vs used up. by the market correcting itself, it seems the $600 used boats that should be that are being "offered " for 800 and are 20 years old and the new $900 boats , no one can get.

My skills are poor but I am hoping practice will help that and some lessons, I am mindful that my skills are newbie level so I try not to go to far from shore when I head out by myself. My fishing Yak is not a great match for the bay so far but should excel in the marshland on the other side of the island., the open water boat may not do as well there I am assuming.

Sealution is a nice boat, I don’t think you would go wrong with it, as long as it fits you properly.

I’ve been watching Craigslist for a good deal on a touring boat in DFW area for going on 3 months now and haven’t seen any decent boats under $900. There are a good number being offered in the $1100-$1200 range, but hardly anything over 13’ comes available under $1000.

I like the older boats that are longer and made of fiberglass with a cockpit.
You just have to be careful about how much sun and UV they have been exposed to.