How to get salt water smell out of neoprene sprayskirt?

I bought a used snapdragon sprayskirt. It looks barely used but smells of the sea. I immediately doused it in fresh water but it retains the smell. Should I soak it in a baking soda solution? Something else? Thanks.

My suggestion is just use it and don’t worry about it. Rinse it well after each use and let it air dry thoroughly. Kayaking gear has a variety of scents; it’s just part of the overall sensory experience.

OK, thank you, that’s fine with me as long as it has no negative impact on the skirt. When I got it it had a slight salt mark on it which I immediately rinsed out so was worried the smell meant I hadn’t succeeded. Good spray skirts, even used, are are expensive, so I want it to last!

Getting salt out of neoprene takes more than a straight freshwater rinse, especially in skirts. The coaming rand holds salt residue even when the flat parts are clear. Get the salt out and the smell should go away.

Soak the skirt in water with either a wetsuit shampoo or dish detergent mixed in. Rinse, then soak with another batch of the detergent mix, final rinse(s), and—necessary for getting bacterial stinks out—hang it out in bright sunshine. Instructions for neoprene care always warn to NOT hang in full sun, but I’ve been doing it for almost 20 years. Don’t leave the gear out forever, just make sure it really is 100% dry before storing it.

The time to dry varies a lot depending on your climate. In CO’s intense sun and dry air, neoprene can be fully dry in less than half a day, though I still prefer to leave it out till the next morning (we rarely get dew). When we lived in western WA, even the dryest, sunniest days were not enough to fully dry neoprene. It had to stay out for at least a day and a half. Many times I thought the skirt was clean and dry, but then the rand felt clammy and, when I looked more closely, the white salt residues hiding underneath told why.

If you paddle salt water daily, forget about doing the above. The skirt will never really dry. The salt holds moisture. And moisture allows the bugs in untreated water to proliferate.

Thanks. We never paddle in salt water (though hope to one day.) So I’ll try soaking it. I can hang it dry. I imagine the upcoming heat wave should work.

Dive and most kayak shops carry detergents designed specifically for neoprene and the smell it can develop. After a thorough cleaning with that, often a rinse with fresh water and occasional use of a less expensive detergent like Dawn will be enough. Dry thoroughly. Use the same method with your PFD. At least rinse after every use. It’s sweat and moisture that causes the problem. Salt will attract moisture and degrade neoprene and many other fabrics.

You can get an enzyme cleaner that takes the stink out of neoprene. I keep a bucket in my bathroom and when I have used any of my neoprene gear (usually wetsuit or booties but same for sprayskirts) I mix a capful in water and soak overnight before hanging to dry. The stuff I have is McNett’s Mirazyme but Sink the Stink is another. Apparently Mirazyme has been rebranded as Revivex: 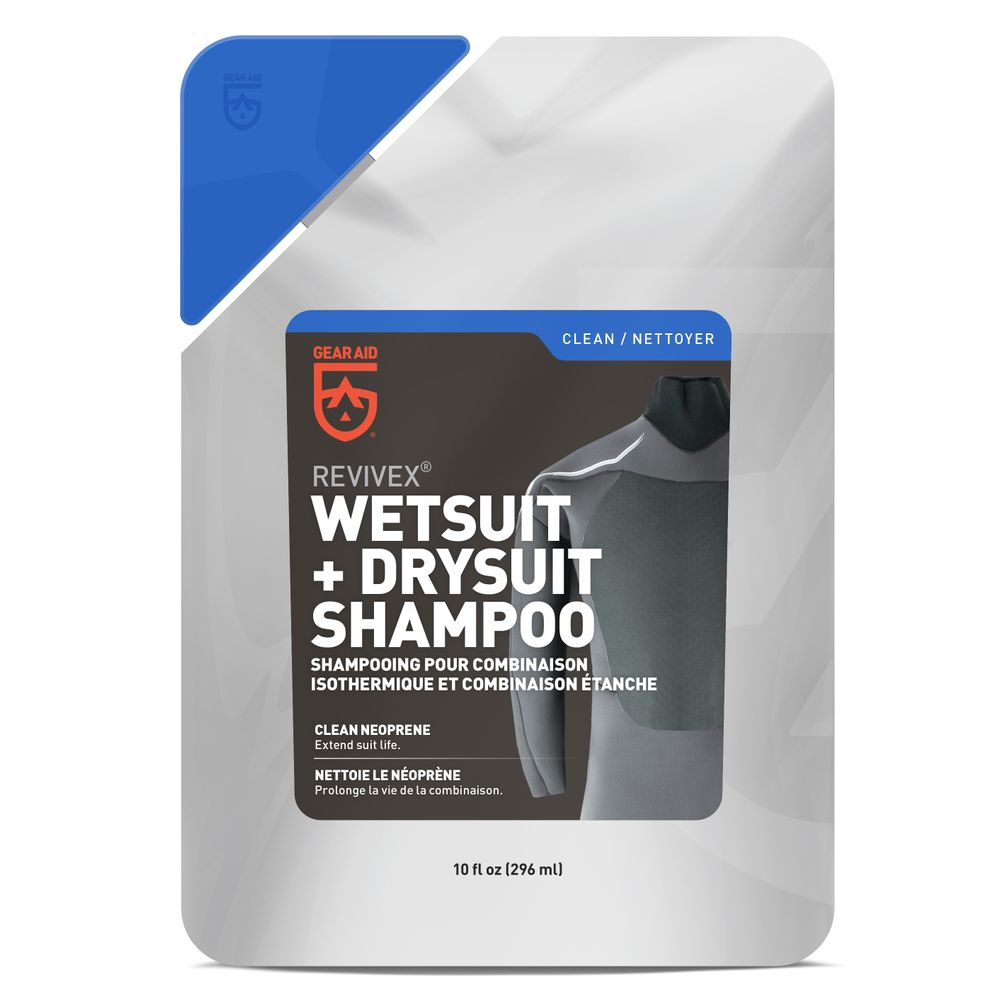 fresh water and fresh air. You can try some detergent in the bath tub, nothing too strong.

90% of my paddling is salt or brackish water. Dawn is my go to gear washing soap. Never have an issue with smell except when I run out of Dawn for a few days of paddling clean up. Brackish seems to have more odor than full salt for some reason in my area.

If there was a salt stain when you got it, the user was not someone who does what I do. Anything in salt water gets rinsed in fresh water after each use. If you do that gets in front of a major smell.

Any of the above soaking techniques should help, point being you received a skirt that was just due for some rinsing.

Wow, Dawn strikes again. I use it to wash my canoes and my cars (and dishes). I read somewhere that it might be a bit harsh for washing cars and then my wife pointed out that I’ve been perfectly happy using it for decades.

Thanks, all. I think I’ll try the Dawn. I have it on hand, and the smell is not too strong. Guess that’s what I get buying a used skirt!

Dish detergent strips off wax and grease. I doubt it hurts anything else on a car surface.

I use Dawn, too. They really got some loyal buyers after the publicity over washing oil-soaked oil spill avian victims with it!

I paddle the Pacific, cleaning up my boat and equipment is part of the paddle. Have had 2 Snap Dragon spray skirts and I just hose them down right after I get off the water and then sun dry them.

Paddle inland rivers in the eastern US in the summer for many days in a row- particularly warm rivers in the southeast Your gear and skirt will acquire a new kind of river funk with immersion. You’ll be wishing for the salt water smell again. The mirazyme helps for a day or two but the river funk smell returns. Also you can leave your gear out where it can be sprayed by territorial cats. Again you’ll be wishing for the salt smell.

If you really want your gear to smell good, just do the upper reaches of the south fork of the payette (idaho). Only place I’ve paddled where the gear smells better with each day of successive paddling. A combination of low humidity and clean water should do the trick.

There’s also an enzyme cleaner called “Sink the stink” that works really good, too. It works nice on stinky paddling footwear, and just about anything else you paddle in/with…