How to land at a concrete boat ramp with surf

I observe the wave patterns & try to paddle as far up the slipway as friction will allow. sometimes I land high enough to be out of reach of the next wave.
sometimes not, & the kayak floats & is pulled back down the ramp

I had many close ones where the back of the kayak would be pushed by the next wave, & was almost rolled sideways up the ramp

do you tie a rope beforehand to the ramp, or toss some sort of grappling hook to help keep your kayak from getting pulled back?
rgds
R

a pic I found showing what i mean by surf, thats enough to make a concrete ramp landing unnerving 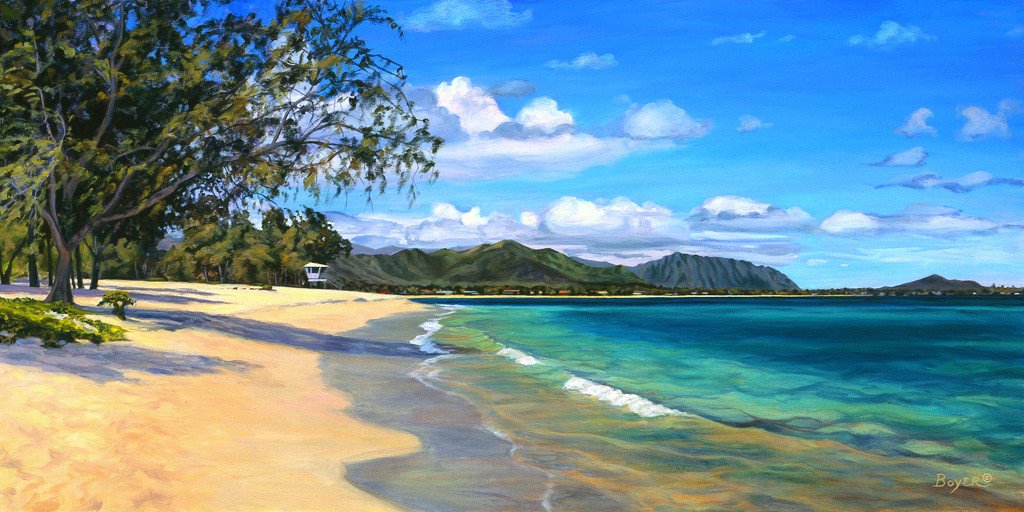 What kind of kayak? If sea or touring — Looks pretty protected; I’d try popping your skirt early and paddling with your legs out of the kayak for the last couple yards. Butt just aft of cockpit if you can balance. If you land straight you can simply stand off your boat and either immediately grab it to prevent sliding or get on one side then grab it.

This landing method carries risks (they all do) but it’s my go-to for steeply sloped beaches, condition-dependent. But if you’re in a wider fishing or sit on top kayak the legs-over method probably won’t serve you.

First, learn to get in and out of your boat on one side in about one foot of water. For myself, I always get in and out on the left side. With enough practice it takes no thought and maybe two, or three seconds; even less for a sot. Anyway, once you are standing next to your boat it’s up to you what comes next. I just lift the boat to my shoulder and walk out of the water. The boat never touches the ground unless I choose to gently set it down.

Okay, I realize that isn’t going to happen with a wide, heavy sit on top, so at least if you must drag the boat to dry ground, you will be better positioned to control the boat.

Same as Alwayswet. Unless you lack the flexibility, by far the easiest way to land and launch in small stuff like picture above is to plop your posterior in or out depending on whether launchnig or landing, feet out, and be backwards. Stand up coming in in shallow stuff that is just shy of the front of the boat landing if it is shallow enough. Going out backwards tends to stop water from coming into the cockpit until you are past the little surf to skirt up.

Dump yourself a few yards/meters out and swim until you’re waist deep.

I’d look hard for a more friendly launch spot even if you have to use a kayak cart to get to it. Concrete is not friendly and those ramps are often covered with slippery green slime just below the water.

I’m with TomL. I would never launch/land at a ramp like the one shown in the first photo. Like the second scenario much better!

I bring my wood boat up to the ramp parrellel to the concrete and get out in the 6-12" water. Then pull the boat up to half out of the water 90 degrees to the waves.

I don’t see any “surf” in the pics, just some little wind waves. (Pics minimize waves) Surf often just requires a beaching on one wave then bail out. The old legs don’t scramble very well.

The rope and pulled back thing? Just hang on to your boat and get a solid footing…as possible.

Just a comment, the OPer shows a landing spot not dissimilar to some marinas around here. It is not possible to land other than in the ramp on a lot of them around here. And the picture shows a long wall of rocky bulkhead;.

While I would also land on softer stuff where it is possible, between honoring the rules of the marina and the issue of moving the boat to the car, some of the suggestions for landing elsewhere may be impossible.

To the OPer - if those things in the second picture are your worst problem for landing you need more time in a boat. What is pictured there is not difficult in any landing scenario. If you want to be able to paddle wherever, this is something you need to get by.

I don’t mind dragging my boat over a little concrete because it’s a poly pool-toy. Still, I minimize the dragging anyway.

Speaking of slime, wear a good water shoe. I now wear flats wading shoes. My old “socks,” slipped on the duck poo and green slime. I was carrying gear and took a hard fall breaking my wrist. Surgery, plate, screws and good drugs I came through it. But it wasn’t something I’d want to do again.

Keel Easy strips make good bumpers for any boat . I use them on composite and thermoform. Plastic just gets bumped.

it’s a plastic PE sea kayak, I don’t mind scoffing the underside, it’s now as rough as toast. what I am worried about is face to slipway contact

I will try the suggestion of landing with legs dangling out.

yes the surf in the pic doesn’t look that bad, but it’s enough to float the kayak back down the slipway. by then the calm moment would have passed & next set of waves will be the large ones I wanted to avoid

I stop paddling and pop my skirt a couple of boat lengths away from the ramp and then, when I can see that I’m in a foot or so of water, exit the boat with one leg on either side, walk to the front of the boat, pick the bow up by it’s toggle and then walk the boat up the ramp until the stern is almost but not quite out of the water before setting it back down onto the dry portion of the ramp. In this way, the hull never gets dragged across the concrete, and the boat is resting far enough up the ramp that light surf isn’t going to push it around (and scrape hull) when I go get my truck. If there were a little surf, I’d use it to walk my boat farther up the ramp. In terms of not having waves roll you sideways etc., I think it just takes practice/experience to get quicker with your exits (the time when you are not in control but vulnerable to the waves). Although I exit with one leg on either side of boat, if there was enough surf that you were concerned about your boat getting pushed sideways as you were exiting, the same rule would apply as with beach surf landings - don’t get between your boat and the beach. In other words, best to have a bit of angle to the ramp as you approach it (maybe even parallel to shore) so that it is predictable as to which side would get pushed towards the ramp, and then exit on the other side. In practice, there’s never much surf at the ramps I use but I still sometimes get kind of parallel to the shore and then use a sculling draw to get closer simply to make my exit in shallower water.

Neither of my kayaks is short enough to allow my feet to touch bottom before the kayak hits the concrete on a straight-in approach to a typical boat ramp, since those are usually fairly steep because that’s what works best for powerboats.

If the surf is truly big enough to actually roll my kayak, I would not even try to land on the ramp, certainly not with my long gelcoated sea kayak. I would attempt to use the dock instead, even if that means tying the kayak to the dock (with some kind of cushioning!) and swimming to shore. But the typical boat ramp does have breakwater protection, as does the one in your photo, so IMHO the surf would only rarely be that big.

So in surf that is not big enough to roll my kayak, I would do what I always do at a beach: position my kayak parallel to the land (perpendicular to the ramp), let it drift close enough for my dangling land-side foot to touch bottom, then get out on the land side. In surf I get wet doing this (waves dump water into the cockpit), but it’s better than letting the beach or the ramp rub the gelcoat off my kayak. Another advantage of getting out on the land side is, the closer to the dry concrete I can put my foot, the less slimy that concrete is likely to be.

It is always worth practicing getting in and out on a dock. If it is high, just get to where you are sitting on the boat on the deck behind the cockpit, gives you better purchase.
Yes it requires practicing your balance. But it is a way to handle places where the ramp may be busy, so you can stay out of the way of motor boards. When l spend some time practicing l can manage tall docks in my 19.5 inch wide sea kayak.

It’'s hard to find a situation where your and my technique does not work. Obviously if there are big enough waves and they are too close together and you have no alternative landing, it could get sloppy. That’s okay, because I’m always prepared to get wet to save the boat.

thanks for all the ideas!

hi there, I practised a bit, getting a foot out very quick on landing makes the difference between an impressive landing & 1 where i am washed away. the slightest hitch, getting foot caught on paddle leash etc, or forgetting to loosen the seat leg lifters can end in disaster.