Got a Hullavator last month and love it. What I don’t love is how hard it is to get the bent pins back in when putting the hullavators back on the roof rack.

I don’t like leaving them on my car when I’m not using them, so I pull the pins and put the lifts in the back of my SUV. Getting the bent pins back in when re-mounting the lifts can be a real pain.

Does anyone have a trick to make the pin installation easier?

I also find it annoying. I have had better luck by spraying the pins with lubricant before mounting the cradles. And it is imperative that I am on a stool that puts me at eyeball level with the second hole so I can see when I have it. That was a tipn from Rookie.

I put the cradles back on the rack in regular position then pull the release to tilt them out. But I find I have to pull the cradle out just a smidge to get the pin started.

If it makes you too nuts you can get locks for justnthe cradles and add them after. Means carryijng two keys but I know someone who does that.

I take mine off as well if I’m driving further than just into town for shopping, and when I wash my car.

I stand on a step stool so I can see what I’m doing. Place the Hullavator on the bar and let it rest there while holding on to it with one hand. That lets me line up the holes so I can insert the pin with the other hand. Do the same taking them off. Has always worked for me.

It takes some technique. If your worried about them disappearing at the ramp get the key cylinders and lock them.

I get the thing at 90 degrees to the rack and wiggle the pin it in. I often have to wiggle cradle fore and aft as wiggling in. :# … When we go on a trip they stay on the truck for 1 to 4 months. Never had a problem at a ramp.

I did have to ream out two of 4 with a drill to get a straight hole.

Thanks for the replies.

Flanges of the arm assembly nest slightly inside the housing so as to make the insertion or removal require some force so as to help them stay put during use. Better that than the other way around at 75mph.

If I recall your vehicle the use of a stool or crate to stand on would likely put you in a better position to manipulate the pins.

As Marshall says, the flanges - the “ears” that the pins push into - are somewhat hidden inside the outer housings.

What I’ve been doing with mine for the last 6 years or so is something I saw on a YouTube. When removing them, for each Hullavator assembly I first remove the straight, tethered, locking pin. Then I squeeze the unlocking lever, lift the outer assembly up by a few inches and reinsert the straight pin and release the outer assembly. This leaves the ears/flanges proud of the assembly by a couple of inches which makes both removing and replacing the assembles much easier. I do use a step stool as I have a fairly tall SUV, but doing it this way I can easily remove or replace 4 assembles in less than 5 minutes.

I store the assemblies with the straight pins like this - you could easily pull them and put them back properly off the vehicle if you wanted to - and I’ve had no damage to the arms in over 6 years of use.

All this is harder to explain than to do. I’m up in beautiful Nova Scotia right now and renting kayaks but when I get home I’ll add some photos of the Hullavators.

Oh, and the only time I take the arms off my vehicle is for Jan and Feb, or if I’m taking a really long trip somewhere.

Here are the photos I promised. Using the straight pins to support the extended ears makes it very easy to align them with the holes in the bar mounts and put the bent pivot pins back in… 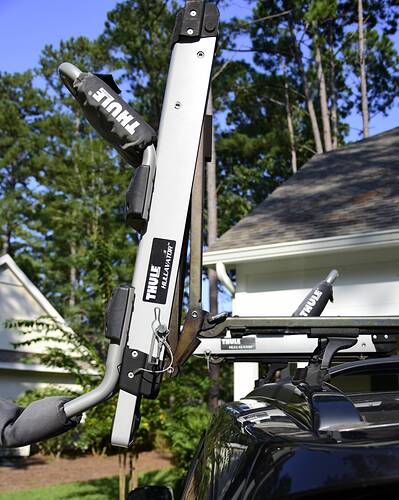 Then just fold the arm down so it locks, squeeze the release handle to lift up the outer edge of the arm an inch or two, remove the straight locking pin, let the arm down all the way and finally put the locking pin in it’s correct place… 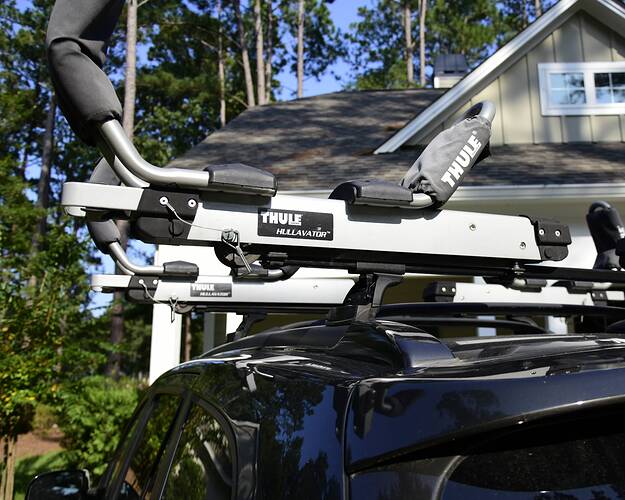 It took me longer to type this than to install all 4 arms!

The easiest ay to slide them back in is to be careful to align the rack PERFECTLY! even a couple degrees off-line will misalign the pin holes.

BUT the most important thing is to NEVER let anyone else use your Hullivator.
I had a set and a couple friends decided to help drop them to remove the boats.
I asked if they knew what they were doing and they both said yes.
Neither pulled the hand-locks and both ruined my hydrolics and snapped the locks.
Neither offered to pay for the damage.

Also let the things down easy, no unguided banging latching. The “hooks” on the latch can bend with repeated abuse making latching/unlatching difficult.

Overstreet, do you mean banging down on the top of the car or during the motion of dismounting the kayak from the roof?

Reason I ask is I have Hullivator set for the typical reasons, a tall car where the reason for them was to reduce what was becoming an increasingly tough strain. I can guide them all I want to come down. But when they have to go from sideways in the air to hull down on the roof, I would have to suddenly become much more physically powerful in my upper body and 5 inches taller to have the purchase to slowly drop a boat onto its hull down position.

I can assure that the hand latch is fully out. But that’s the limit of my control on the drop.

If you consistently unlatch and let the empty rack slam shut from the unload position it will bend the catch and cause problems.

@Overstreet It sounds like I had the part of the motion you were talking about correct then. FWIW I took a look at that part of the mechanism last night. My Hullivator cradles are inside along with my cross bars until my schedule aligns for pool sessions and/or it is warm enough to use the hose off bays in the car wash.

If you are taking about dropping them under control when they are empty, it seems that comes naturally anyway. Even with shorter me and taller car.

But one other thing I do that I have not seen replicated is that I use a second strap on each for longer trips, anything over the distance to a local launch. That second strap is wrapped around the boat and the bottom of the cross bar at each cradle, so the latch on the cradle is not doing any work in transit unless that second strap goes.

I started doing this as a cob around my smaller boat not being as tight in the cradle as I preferred, rather than adding padding or wrapping like Marshall has shown people. It made sense since I always double strapped for long trips anyway. But I suspect it is also helpful to take some weight off the latches in the cradle.