I’m new to the site but I am a relatively experienced kayaker. I recently moved into a new house and inherited a bunch of “junk” that the former tenant didn’t care to take with him. Among said junk was a relatively intact 15ft aluminum canoe that was sitting under an oak tree collecting rain water.

After bailing out an entire canoe full of water, I found the two thwarts that had snapped off and upon further inspection noticed that the canoe had some how been oil canned. Looks like it was strapped down too tightly to a 6ft truck bed and driven down a dirt road for several miles. Luckily the only creases are small and on the sides of the canoe. However, the keel has been pushed up several inches into the inside of the canoe and the oil can runs, horizontally, it’s entire length.

I know the boat is still somewhat water tight, it was filled with water, so I got to work cleaning it up. I riveted the thwarts back into place and repaired several damaged rivets that were below the water line. Then I got out the old dead blow hammer and got to smacking… Nothing, the crater sized bulge will not move.

My question is this, is the canoe serviceable or a potential danger? I know that it is going to track like a shot duck, but id only be using it for short and tame river trips with my girlfriend and dogs. I don’t want to drop a ton of money into this thing, times are tight. I’d love to use it though, my girlfriend is terrified of alligators and the canoe would put as in the same boat together. I’ve attached some pictures, I’d love some advice on potential repairs! I have it on a make-shift canoe trailer and will be hauling it to a local lake tomorrow to test it out. 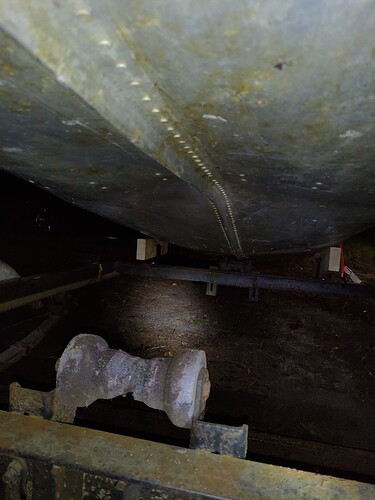 I would try to support the rib on either side of the bends center and use slow pressure from the inside to push the bend out. Sharp impact may break the rib, even slow steady pressure may break it, some grades of aluminum can be bent only once, the first bend may form micro fractures, the second bending process may make it snap. I would avoid heating the aluminum to try the repair, this would probably make the aluminum skin brittle and easily punctured or torn.
In my opinion this can go several ways: no repair/bad performing boat. successful repair/ decent performing boat, failed aluminum during repair/ $25 worth of aluminum scrap. Good luck!

So a year or so ago we had an old Navy helicopter mechanic that rebuilt a damaged aluminum canoe. Who was that?

That’s kind of why I stopped trying to force it out and just fixed the thwarts… Figure a bad tracking canoe is better than no canoe.

Try this. First cut a piece of 4 by 4 lumber that is wide enough to snugly fit inside the gunwales directly over the center of the crease. Then tightly strap all the way around the outside of the hull directly over the 4 by and a foot to either side using ratchet straps. This should keep the 4 by from popping out. then put an 8 or so inch square piece of 2 by 8 on the floor directly in the center and put a bottle jack in between the two pieces of wood and tighten the jack slowly and see if that will not put enough pressure on it to pop it out. Do it slow and easy as you don’t want to crack it. If the center moves and the keel strip on the bottom will straighten out, try shifting the jack right and left to push the whole crease out. This process is about as close to the reverse of how it got that way as you can get. I have done it before and been successful. The biggest factor would be the gauge of the aluminum and how brittle it is.

I took it out on the lake this morning to get a better feel for it’s overall condition. All of the rivets held up, not a single leak. The canoe still sits relatively flush in the water, however it does like to track to the left… I feel a lot better about using it as is if I can’t repair it myself.

I am definitely going to give that a shot this week. Fingers crossed! This is definitely an oil can, right? I know that there is quite a debate around the use of that phrase when referring to large dents…

I would call that an oil can, though the term is usually used to refer to boats where the bottom lacks stiffness and moves up and down while paddling.

Another term that applies here is “hog keeled” meaning it bends in the shape of a hog’s back - the opposite of rocker.

Anyway you can help with an ID? The red stipes are the only discerning marks. 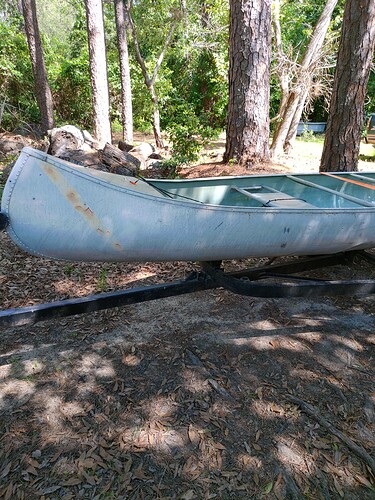 It looks like an old Grumman, but in the heyday of aluminum there were maybe dozens of builders all making similar designs, so I am not at all confident with that guess. I’m not even sure the red stripe would have been original.

Personally, if you are not going to use this canoe for an expedition or long distance traveling, I would leave it alone after the repairs you have already made. It is water tight and tracks reasonable straight. Any further work to “improve” it risks popping rivets and compromising the hull integrity. There is the theory that perfection is the enemy of good enough.

It all depends on what you are planning to do with it. The risk of sudden and fatal failure at this time seems pretty remote.

Thanks man, I appreciate the input. After a couple of beers the oil canning is actually starting to look pretty good; it adds character. However, I’m a little concerned that due to the way the boat sits on the trailer that I might do further damage when strapping it down. Does that seem rational? This aluminum seems incredibly tough… Makes me wonder how it got in this condition to begin with.

Two things that might bend a canoe like that would be ratchet straps (which are unlikely because I think the person would notice) or moving water. If it filled with water and hit a rock or log while moving downstream that would bend it. Bending that I-beam keel would take considerable force.

If using regular cam buckle webbing straps you are very unlikely to further damage the canoe. Aluminum canoes are pretty tough. Never use ratchet straps on any canoe or kayak. It’s too easy to over tighten them. I only use these with my truck for strapping down things that can’t be damaged like lumber, pipe, and compressible things like brush. Over tightening can oil can most boats and cause gel coat damage with composite boats.

Keep in mind that webbing straps are incredibly strong, often with a rating of well over 1000 lbs and they don’t stretch. You only have to tighten them enough to be snug, not so much that you see deformation in the hull. In an accident with a kayak on a roof rack the entire roof rack will usually tear off of the car before a well maintained strap will break. (A good reason to always use bow and stern tie downs in addition to straps on the hull).

Cam straps and those with ratchets have wrecked plenty of boats.
You can do better than this aluminum boat.