I need a new boat ASAP

I have a problem. Our new travel trailer doesn’t work with my boat! We had done a test fit but that’s not the same as a real fit.

Here it is pointing straight ahead, not too scary. 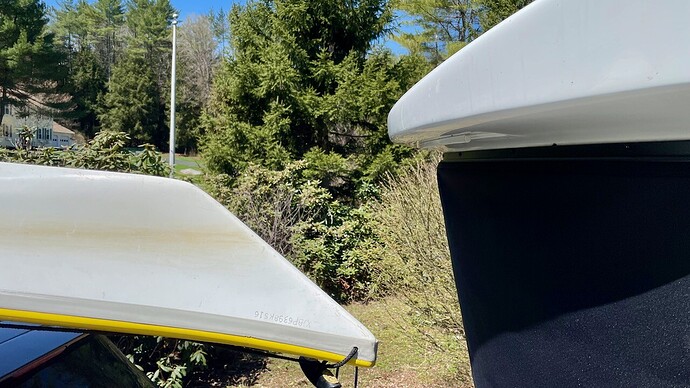 We were worried about left turns and rightly so. 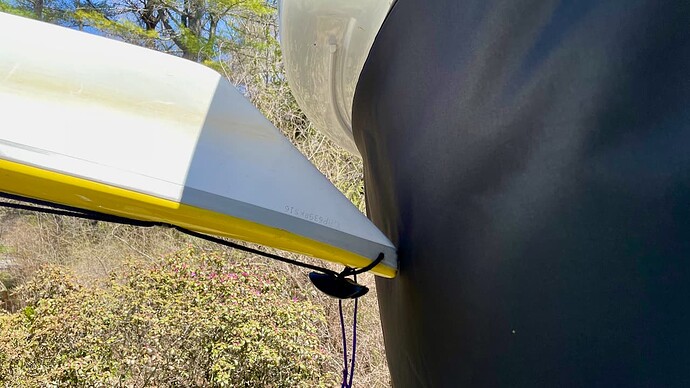 The cloth cover is over a huge glass window. The boat is touching the cover in the photon but you can barely squeeze two fingers between. They will touch on anything more than a slight left turn.

I love my P&H Cetus. So I need something Cetus-like. I know that that isn’t possible on short notice, but what is out there that won’t make me unhappy. I know about the lovely Necky Manitou 14’ boats, I’m still looking but haven’t found a used one yet.

I also don’t want to spend a lot of money, I’m building a Cape Falcon F1 and West Greenland over the next year. So I want something cheap that I can sell next year.

Help me paddling.com, you’re my only hope.

I have a line on a Manitou!

Is there room to shift the boat away from the trailer? Or perhaps lower the kayak as the window appears to slant farther away as it goes down? Without seeing the whole assembly, I cannot offer much advice.

Have you considered a Volan? doesn’t meet you objective that it be cheap, but it supposedly handles a lot like a Cetus. Something to consider if the Manitou deal falls through.

Is there room to shift the boat away from the trailer? Or perhaps lower the kayak as the window appears to slant farther away as it goes down?

Curiously, there is a 2 1/2" lift kit for the trailer, but we’ve not even decided if we’ll install it yet.

Have you considered a Volan? doesn’t meet you objective that it be cheap, but it supposedly handles a lot like a Cetus.

It’s good to hear that the Volan paddles like the Cetus! I probably would have bought one if it was available when I bought the Cetus.

With one picture and none of the overall set up all I can do is guess. We have 18 foot boats and a travel trailer. We did punch a hole in the guard over the window on the trailer. But just shifting the boats forward six inches made all the difference. I don’t understand why you can’t shift the boats forward.
An overall pic would help a lot. 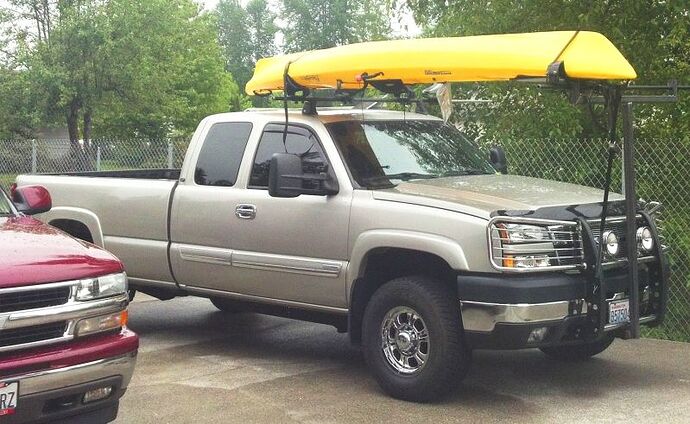 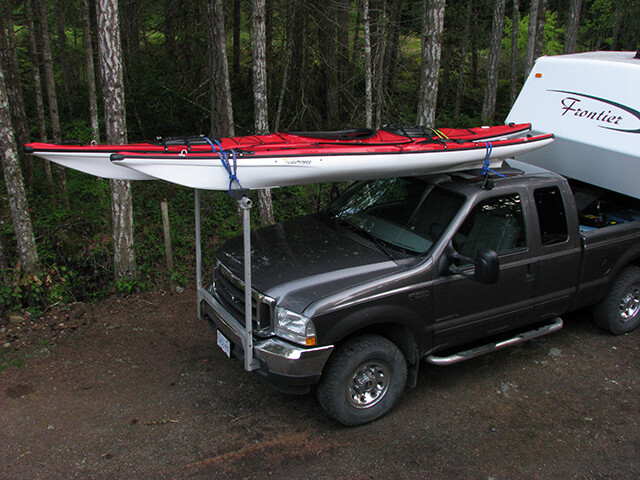 Nothing paddles like a Cetus but a Cetus. That being said, perhaps a Virgo HV might be a fun trailered kayak. @GregofDelaware mentioned the Volan and I think you’d have a hoot with it but the Virgo is 60% less $$. You’ve got my #. TTYL.

Like @NotThePainter said we were worried about left turns. I’m not kidding that it’s tight–I’d say about 1/2" and I’d barely started the turn. Here’s how it was before we did the turns. We were super hopeful it’d work. 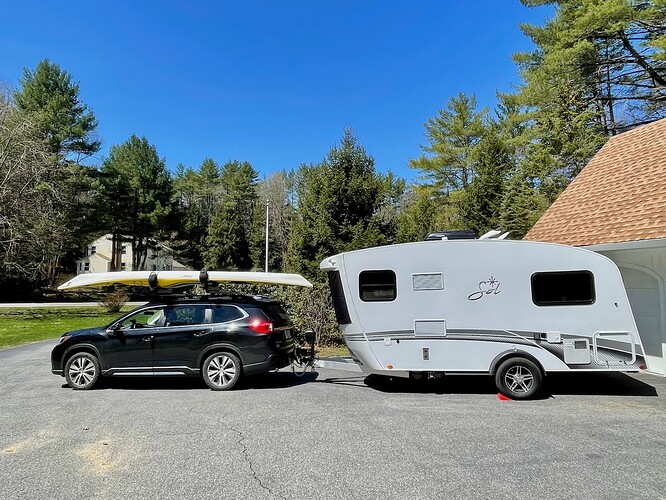 @Andy I just posted a pic. Pretty sure @NotThePainter is getting a new boat. Oh darn!

@kayamedic, we’ve shifted them as far forward as we can. This trailer is unusual in that it slants forward not toward the rear of the unit like most of them do. It’s great for inside space but not so great for long boats and SUVs. There’s a pic of the overall set up now.

Hitch extensions reduce your towing capacity, which is ok, since the trailer is 4,000lbs and we can tow 5,000, but they also reduce tongue weight, and we’re at the limit.

I don’t understand why you can’t shift the boats forward.

If I move the boat even an inch forward the coaming will be in contact with the hullavator pads. I’ve already cracked the coaming once, just pulling it off my wooden stand.

That would be perfect if we had a truck, Subaru Ascent here…

That being said, perhaps a Virgo HV might be a fun trailered kayak

I’ve always wanted one of those, especially when the creeks get tight. @Lillyflowers has had to tow be backward out of a tight spot before! But then I discovered skin boats, and the F1 is only 14’ so I plan on building that this year.

Another is a V rack, typically used for skis. They can be shifted forward a bit. It would give the bow support and maybe the clearance you need. Of course, nothing wrong with adding another kayak. I have 6-8 in my personal fleet.
https://www.goodboypaddlesports.com/shop/

Can you just mount the boats backwards (stern facing forward) to get a few more inches of wiggle room?

the coaming issue might be solvable… Of course you have to watch how tight you strap but a series of pool noodles with the slot over the coaming might take pressure off… And I agree with Tom there is no reason to have to go bow forward. At least its a try.
Here is a link to a front hitch for a t rack At least it has been tried… https://www.ascentforums.com/threads/front-tow-hitch-receiver.10795/

Can you just mount the boats backwards (stern facing forward) to get a few more inches of wiggle room?

The Cetus is 11" longer in the front than the rear, measuring from the top, not the bottom. The bow has a steeper angle than the stern but there’s no way I can make up the difference.

Another is a V rack, typically used for skis.

Here is a link to a front hitch for a t rack At least it has been tried… https://www.ascentforums.com/threads/front-tow-hitch-receiver.10795/

That’s really cool! But I really can’t add anymore weight to the roof, we’re at the factory limit now.

Just trying to think outside the box, is there a rear door on the trailer? could the kayak be slipped inside the trailer for transport?

Have you thought about putting the kayak on the roof of the trailer?

No back door. I’m not even sure it would fit if we did have it since hitch to tail is 19’ (overall length, interior is smaller). Really don’t want to make the unit taller because it could make us too tall for some tunnels. Plus we have limited carrying capacity. The rack plus boat would probably eat up close 1/6th of the 610 pounds of capacity. 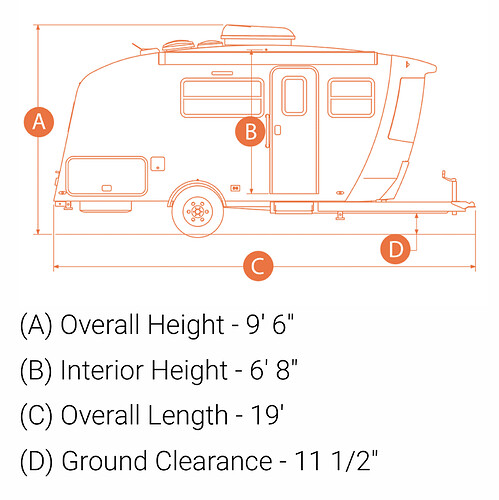