I rescued a bird!

I was paddling on the Gulf side of Fort Desoto on Saturday, it was quite calm but the current was strong. Passed a couple of crab pot buoys and noticed something in the water near them, turned out it was an entangled black skimmer. Poor little guy was thoroughly stuck and totally exhausted. I cut the lines tethering him to the buoys and then paddled for shore, which was fortunately only about 100 yards away. I have a friend who is a park ranger there so I called her; she was off that day but called another ranger to come meet me and pick up the bird. It was brought to the Seaside Seabird Sanctuary; I haven’t heard anything since but hopefully the little guy was OK. It didn’t appear to be injured but certainly could have been.

I never used to carry a knife on my PFD until the Everglades Challenge - it’s a requirement, and this is now the second time I have used it. I definitely couldn’t have gotten the bird free without it, and digging a knife out of a drybag in my day hatch would have been a pain. 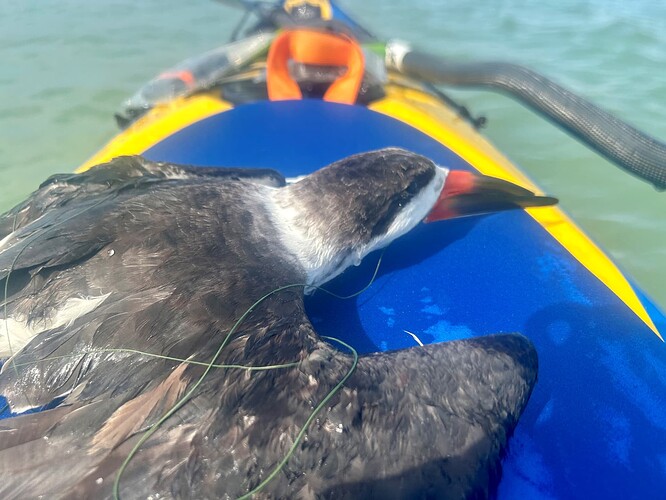 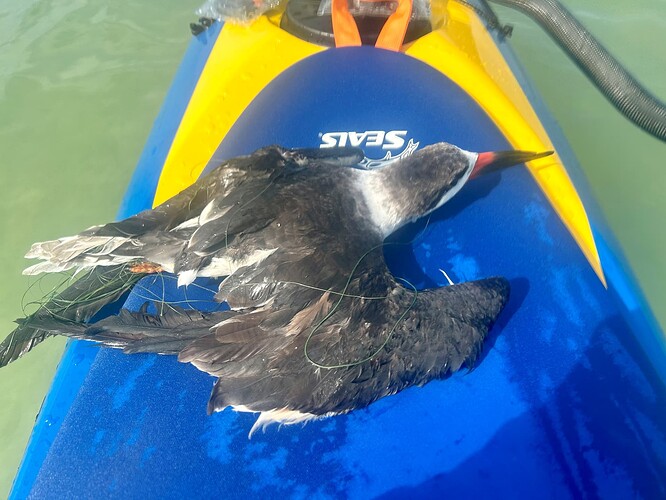 I love skimmers, such amazing birds. All wings in hand, and that lower mandible is like a knife, no wonder they can drag it through the water. Knives definitely come in handy at times. I always have one with me, kayaking or otherwise.

A great save, Brodie. And pox on the angler who discarded the fishing line.

You get a big ATTAGIRL for that.

There is a nesting colony of Skimmers on the coast were I sometimes paddle. They seem to like nesting with Least Terns. I make an effort to remove any monofilament I see on land or water. That stuff can cause a lingering death to all kinds of wildlife.

It mostly gets used to slice an orange on a break, but that a favorite feature of the MS Fit PFD. There is a pocket inside the zipper that is perfect for a dive knife in its case, with a D-ring to tether it. Since the Kokatat PFDs are Coast Guard tested with just the clips, not zipped, there is no safety issue unzipping to get to it.

@Celia that’s what I wear, and I also just use the clips, except for certain situations. I do keep the knife (NRS CoPilot) on the lash tab on the outside of the vest. Everglades Challenge rules stipulate a knife that is accessible and usable with one hand.

Always carry a knife on your PFD that you can access with one hand. It can save Your life.

My bird rescue story:
Quite a few years ago we were with GrayHawk at a restaurant in Key Largo named The Buzzards Roost, He had just bought a whole box of fold up knives on EBay and gave me one of them When we got home I put in a small dry bag that I kept my wallet and Keys in
The next day, Nanci and I were paddling along the mangrove shore line of Litltle PIne Key and came across a Turkey Vulture that was hopelessly entangled in fishing line so bad that one of it wings was bent backwards. I got the Buzzards Roost knife out and carefully started to cut it free. It was so exhausted that it didn’t even struggle. When I got close to untangling it I realized it would drop into the water so I manuvered my Kayak to get my front deck under it and cut the last few strands It dropped on the deck wth the bent wing still under it. I decided to try and gently bend it back in place and it worked. We sat there for about fifteen minutes, and it finally stood up and took off. When it got up about 25 feet it circled around us and kept circling around us. It flew higher and circled around us all the way for the rest of the day nd back to our take… We nick named it"Turk" and every so often waved to it.
I’ll remember the experience for the rest of my life
Jack L

Corvids are well known for their intelligence and ability to recognize individual people. I saw this hundreds of times and continue to do so.

I think some other kinds of birds also are much smarter than most people realize. Only recently has it come to light that “dumb clucks” (chickens) are not so dumb after all. Human failure to recognize animal intelligence does not equal animal stupidity.

I rescued a baby robin that had fallen on our back porch, breaking its wing. A local wild bird rehabber treated it and seven others of similar age, then released them from our home or one block away (a robin heaven). One of those birds returned shortly thereafter, perched on a phone line that ran across in front of a big steeply-pitched skylight, looking in at me just as the local crows (who knew me) did. I got one good luck at the robin’s friendly face peering in, eye to eye with me, before the crows chased him out of “their” perching spot. No other bird had ever occupied that spot, or did they ever later on. When I asked someone familiar with animal behavior if she thought robins recognized faces as corvids do, she immediately said YES.

I think that robin was saying Thank You, and your vulture was doing the same. There are accounts of whales cut free from entangling lines who then treated their human benefactors to a spectacular acrobatics display, jumping for joy and/or gratitude.

I suspect a lot more birds recognize faces than most of us realize. Certainly voices. I went into the Barred Owl enclosure yesterday at the wildlife rehab place on my weekly shift (clean and water and feed) wearing a fleece hat for the first time this season. Both the male and the female hit the air which is unusual, usually it is just the male who is a flibbertygidget.

I said the first thing that came to mind, which was “Cool it guys it is just me”. They both immediately calmed down and sat on something.

Crows are smart, and they can learn to talk.y brother’s friend had one (dont know the back story). It could repeat its name and picked up phrases, like “Who’s in the bathroom.” Its a freaky sight.

Growing up on Chesapeake Bay we did a lot of fishing. Casting plugs into schools of rising blue fish stirred up a lot of bait fish and attracted sea gulls. Once in a while a sea gull would hit a plug. Some times they couldn’t spit them out. We used to reel them in and remove the hook and turn them loose. My grandfather once caught a duck on a fly rod.

Corvines are really smart. I had a log house once that came with a pet crow. He had been injured and rehabbed by the previous occupants. He roosted under my front porch every night. When I took a shower he would sit on the window sill of the open window with no screen. He came in the house once but it scared him. He followed the kids to school every morning.

This warms my heart.

Nice Job! Help when and where you can!

So good to see someone like you, sad to see this happen to the poor bird. I wish people would be more concerned about what happens to their fishing line.