Does anyone know if the attached pictures are of a duck boat, kayak, or otherwise? Any idea if it’s home-made, approximate value and if there is any kind of a market for these? It’s for sale locally but the owners received it from some friends and don’t know much about it. I like it, but I’m doing some research before making the purchase. Thanks in advance!! 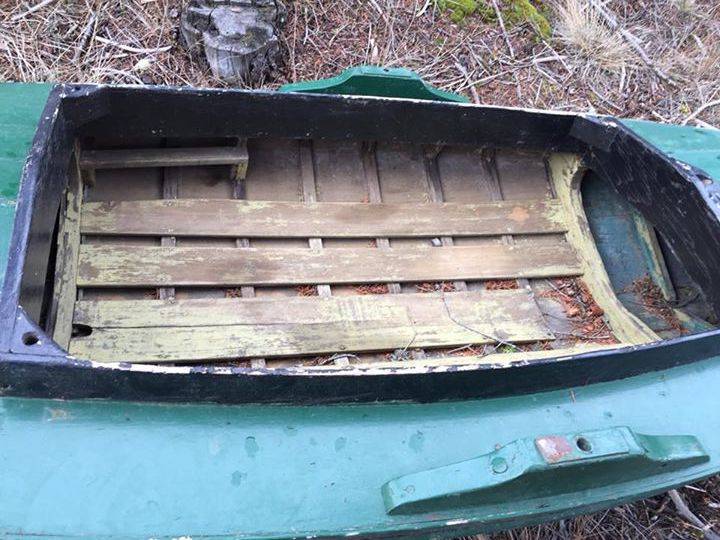 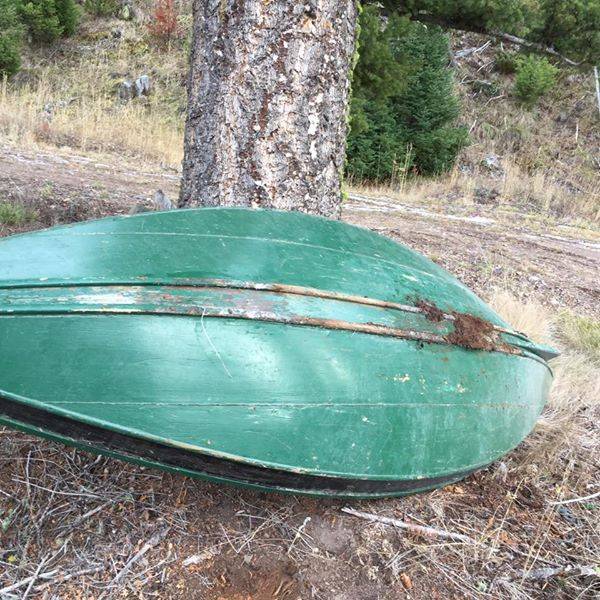 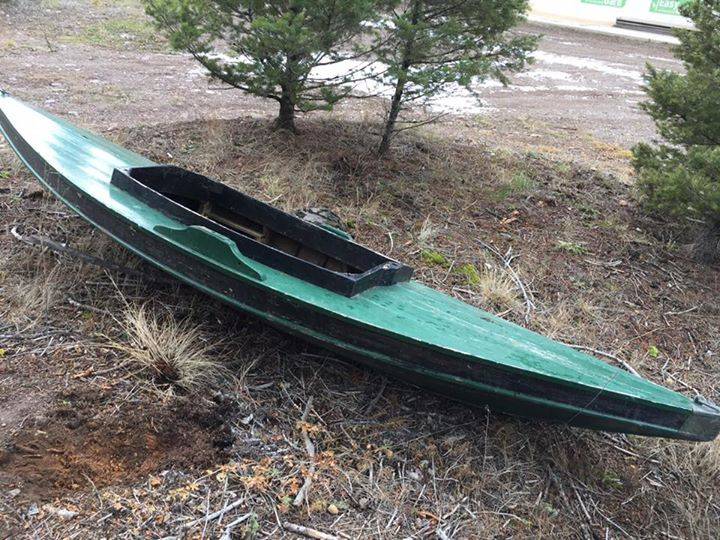 It looks to me like some kind of duck boat, though I’ve never seen one quite like it. It’s made for rowing (so I’d also call it a rowboat. It’s no kayak), and there’s supposed to be a bench seat that’s supported by a pair of raised rails on the interior. You could buy a generic canoe seat from a place like Ed’s Canoe online, trim the ends to the right width if necessary, and fasten it to the supporting rails with screws, and that would be far more comfortable than a simple board, though a board plus an old-fashioned boat cushion would do the trick. It won’t be a speedy boat, partly because when seated, you won’t be able to lean back very far during the power stroke on account of the rear deck being so close behind the seat, so rowing will be largely arm motion, not rocking your upper body fore and aft (that kind of rocking of the upper body is far more efficient than arm motion alone). It looks pretty heavy because all of the internal framing is much beefier than what’s necessary, but I’m hoping for your sake that the hull and decking are made from quarter-inch plywood so that it’s not outlandishly heavy.

That boat is definitely either home-built, or built by a small specialty shop. If I had to guess, I’d say there is virtually no market for such a boat, which isn’t to say you couldn’t find a buyer who wants to use it for what it was made for, but I bet it would be tough. As to price, I have no clue except to be pretty sure you wouldn’t get all that much for it. If you want it, that’s wonderful, because it IS pretty cool if you like old-time, traditional stuff (and I myself definitely do). I bet that the average potential buyer would plan to convert it to a bookshelf or a landscaping ornament (modern duck hunters have become firmly entrenched in the 21st Century, so most use enormous aluminum Jon boats with equally monstrous air-cooled engines having shallow-water drive. The idea that a modern duck hunter would use his own muscle power to get where he’s going is very rare these days).

Check carefully for rot. It would be unusual for such a boat, sitting outside the way it has been, to be in pristine condition. Any rot is completely repairable for someone with decent woodworking skills, but not everyone will be willing or able to deal with such problems, if present.

Is this a super-dry climate? It looks quite arid to me, but if not, something might be wrong here, as that boat has clearly been sitting right-side up for a long time and yet there’s no water inside, and that suggests to me that it leaks (where I live, any boat sitting on the ground like that would always have a pool of water inside). Boats made from large planks often leak badly when first put back into use, then seal themselves, but for a plywood boat like this one, I’d expect it to be reasonably water-tight no matter what.

Think also about transport. I bet it won’t be easy for one person to get that boat up onto a car’s roof rack, unless the rack is well adapted for one-person loading (allowing for some kind of slide-up method, either from one end of the car or from the side). Back in it’s day, such a boat would often be carried on a light utility trailer, and maybe you can do the same.

It’s not a kayak – the tholes on the sides of the cockpit are for oarlocks. My guess is it’s a version of a Barnegat Bay sneakbox, used for hunting waterfowl. Probably a one-off, built to no particular plan. There wouldn’t be much market for these – buy it if you feel like taking on a restoration project.

A home made Delware Ducker? They are much like a Barnegat Bay Sneakbox but are typically pointed at both ends.

Is it rigged for a mast and sail? Wow… great assistance from each of you! Thank you!