If At First You Don't Succeed

Was able to actually Park N’ Play a bit today after my unsuccessful bid to Put-In yesterday. Particularly sad day here in New York–Our highest death toll to date, due to you-know-what.

While I was “paddle-poling” the Schoharie Creek, many a car went by on the roadway overhead at one spot. They hit their horns, pumped their fists and waved. I waved back and was sorry I didn’t have my small American flag with me to hang off the bow. I tried again and again to make my way upstream to play in a small rapid set, but the strong current kept sweeping me back down. Another reminder of what a boffo Spring whitewater season we in the Northeast were missing. A friend snapped a few shots from the banks. God bless the Empire State and God Bless America. 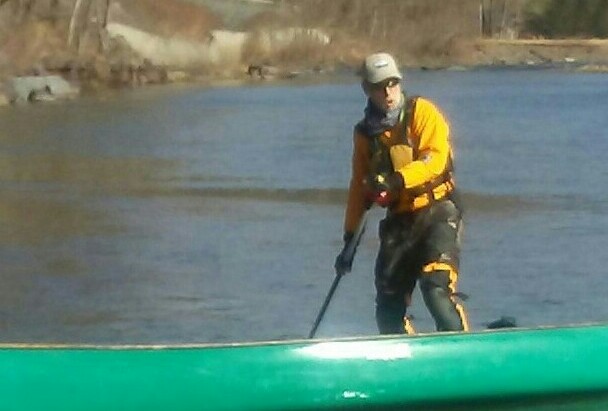 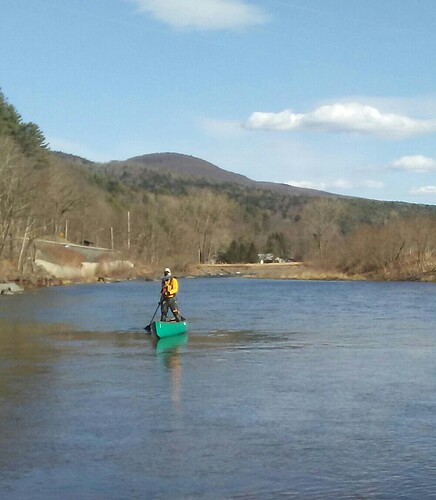 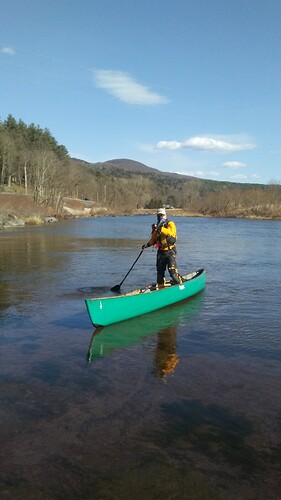 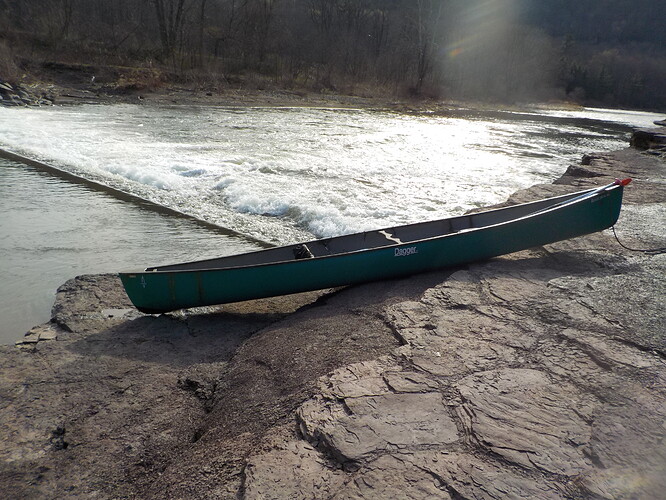 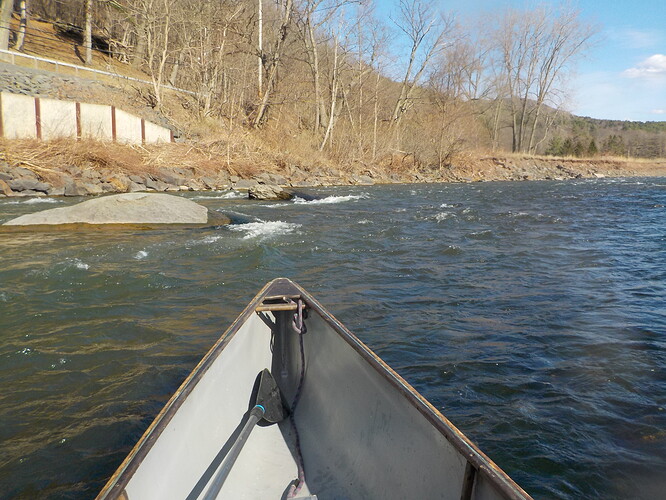 I tried again and again to make my way upstream to play in a small rapid set, but the strong current kept sweeping me back down. Another reminder of what a boffo Spring whitewater season we in the Northeast were missing.

Hmmm, So did you really “succeed?” LOL!

Okay… You got out on the water. Yeah, you scored a “win” for that.

The success was getting past police to get in the water(another post). Say, did you get sprayed with “surfer’s orange juice” or something???

I am joshing with ya! I agree that getting on the water was the win. It’s the trying/doing that counts.

I think that Beachgrit article was about the idea that, at some point, the surfers will get out on the waves. Total irony in that surfers and paddlers in moving water are largely practicing physical distancing without even really thinking about it.

Not fully trying to hijack this post, but in my excessive time poking around Youtube I came across this video from Viet Nam. Think you could make it upstream in this?

Yikes! Glad those guys didn’t sink with their boat.

Total irony in that surfers and paddlers in moving water are largely practicing physical distancing without even really thinking about it.

I started out as a surfer on Long Island and the Jersey shore, long before I ever saw a paddle, kayak or canoe. And although I live no where near the ocean these days, I do have some experience. What I want to know is WTF is with those cops in San Diego humiliating that crew like that?–Sure, give 'em a fine, let the ignorant politicians pontificate about “the danger”. But allowing cops to be petty masochists? In my day we’d have picked-up brickbats. 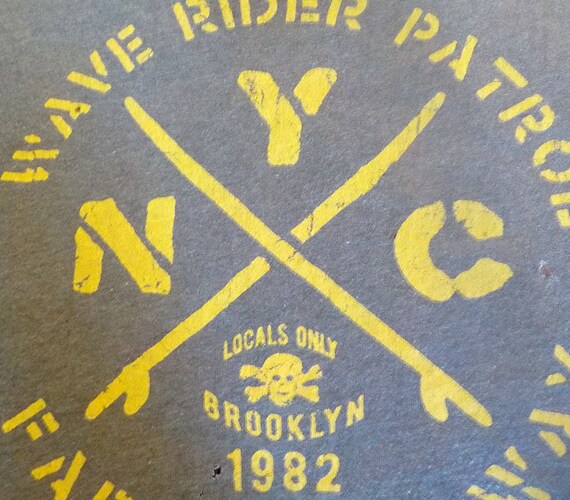 Yikes, indeed, that was nuts!

Think you could make it upstream in this?

That’s awesome! I’m a former New Yorker (grew up near Poughkeepsie, a little downstate). Man, I remember when the Schoharie flooded real bad - so bad that it wiped out part of Interstate 90 back in the 80’s!

Glad you were able to get out and take a stand! Lots of (upstate) New Yorkers need to follow your lead!

Not too many in one place…

What I want to know is WTF is with those cops in San Diego humiliating that crew like that?–Sure, give 'em a fine, let the ignorant politicians pontificate about “the danger”.

Honestly, I think that photo in the Beachgrit article is BS. It’s probably police action in relation to some civil disobedience or protest action unrelated to the surfing ban. The intent of the article is for the surfing author to vent on behalf of the surfer breathen what seemed like increasingly more stringent (and misplaced) action by CA LEOs to enforce physical distancing. Again, the irony is that the failure to adhere to distancing is usually with the walkers and not the folks who are out to get some more intense activity/exercise. Shutting the beaches just pushes the crowds to other venues. Here in Boston, I am seeing that where beaches are closed, the walkers are now crowding other walking paths, parks, reservations, etc. Frankly, if folks seriously adhere to social distancing and use prudence, IMO, there is probably plenty of open space to enjoy for most folks. But, as some of see firsthand what media cameras have caught – oblivious subsets of people, congregating and engaging in up close activities. despite all advisories and admonitions… Well, then we all end up facing more draconian measures.

Yeah, I thought it might be BS. (Don’t know why I’d take anything that might happen on terra firma as straight dope from a surf-reporter.)

I totally get it on all other counts.

Here’s one idea for getting around beach closings and not violating any social distancing edicts: Find a house or suitable apartment building(preferably owned by a simpatico surf bud)and rig a zip-line on the roof that goes direclyt to the break/jetty/buoy.

Cops would have to go into the water itself to make any busts(and we all know they’d never do that but call the CG instead;-)

I must be missing something. What is there to celebrate about someone intentionally trying to avoid police security and bypass rules about isolation, staying at home, minimizing risks to minimize the need for emergency responders, avoiding non-essential travel, and so on? Is it really so hard to give up paddling for a little while, while we all hunker down and try to get through this?

I don’t believe he is avoiding police as from a legal aspect he is following the rules since recreational activities are allowed in NY so long as physical distancing is adhered to.
https://parks.ny.gov/covid19/

If you read his other thread, he planned to launch from a secluded village access but was not allowed because the village shut it down due to too many hikers at a trail some 20 miles away.

Another example is Maryland, where recreational boating is not allowed, but paddling is:

Does kayaking or paddle boarding count as recreational boating?

Since kayaking and paddle boarding are both human-powered forms of exercise, akin to bicycling, they are permitted under the executive order. Guidance on social distancing and the prohibition on social gatherings must be strictly followed.

There is the matter of local conditions. Some parks around me have restricted access. Some others where thus far people have not shown themselves to be fools are open for use, just that educational centers and bathrooms are closed.

Paddling is not yet much of an issue here because of our climate. The only people out there right now are people properly prepared for it. That will likely change and open up the argument about rescue resources as the weather warms and people who don’t know what they don’t know get on the water. But that will be true everywhere, including around you if there is water anywhere in your vicinity.

As Rookie said, in the latter incident no one was acting in violation of any rules.

I’m fine with what people do, their lives are theirs to live. I just think perhaps stuff like this should be on the down-low, not crowed about as though someone discovered a loophole and is getting away with something illicit. I have cold water gear, I paddle all year long, I can self-rescue, and I am responsible enough to stay on land when conditions are likely to exceed my skills. But the casual observer on shore does not know that when they call it in. The cop coming down to check me out won’t know that. The nurse or doctor driving home after a 12-hour shift and seeing me enjoying my free time, in a pursuit she sees as an unnecessary risk that could land me in her ER, doesn’t know that. Recreational boating and paddling are not restricted here yet, and boat ramps and access points haven’t been closed yet, but still, most of the folks in my local paddling circles have agreed we will be staying off the roads and off the water as long as we are being asked to stay home and stay out of harm’s way. Personal choice, whichever way a paddler decides to go.

You did miss something. Let me see if I can clear up any confusion you feel my post may’ve caused, before you climb any higher on your high horse.

First, thank you Celia and Rookie for trying to clarify something that isn’t(for some reason)particularly clear to this contributor. And as this current post was a follow-up to one I made the day before(see “Busted On My Way To Park N Play”)granted this may be somewhat my own fault.

I know a number of local police officers,both active and retired, that are counted amongst my friends. And although I’m not shy when it comes to questioning authority, I do not believe in making theirs or any other emergency service professional’s job harder, even during the best of times. So you are way off base in this regard as it applies to me personally. The discussion as to whether we as paddlers should be going in the water at all during this dreaded time, has been covered in spades in other Paddlers Place posts. Since my state says it’s legal/not a health threat to recreate in water at this time, I choose to do so. Of course, I respect anyone else’s right, even yours, to stay home. No matter how “experienced” they claim to be.

Lastly, my posting the link above about the zipline, was a purely facetious response to Sing’s(an avid Bostonian beach surfer) “joshing” comments, into how one might bypass stepping on the sands. They were in no way meant to circumvent restrictions enacted for the good of public safety, or be of anything more than good natured chiding of the police.

Sorry. No offence intended. My reaction stemmed mainly from your comment, not your post, i.e., “The success was getting past police to get in the water.”, which perhaps I took out of context. And even then, my response wasn’t so much about what you did, or even why you did it, but about the celebration of (what seemed, to me, though apparently in error) your having gotten away with something. I was out of line. I will put my horse back in the barn now.