I'm Not a Tree Hugger... but just something wrong

Saw a Prius towing a jetski today.
Gotta be some kind of nature contradiction or visual oxymoron…

The levels of irony of that are innumerable! Start producing and disposing of batteries, then coal fired electric plants, then the amount of plastic (petroleum product) used in construction of the car…
My 69 ford truck doesn’t look so bad!

Jet skis are properly referred to as “ski lice”. Are you sure the Prius was towing the ski louse? Could it have been an infestation?

My gated community offers short term rentals and has a marina.
We have recently finally banned jet skis except for property owners.
Seems the 97% idiots have ruined it for the 3% competent operators…

Going under the speed limit in the left lane, I assume.

Out on the road today
I saw a Deadhead sticker on a Cadillac
A little voice inside my head said
“Don’t look back, you can never look back”

Somewhere there are righteous brothers
singing behind a wall of sound.
But some of you’ve lost that loving feeling.
Contradiction is a Spector hanging round.

I would see that and think oxymoron…

Not paddling related but irony/oxymoron related:

I was driving down the road once and spotted a big old battleship of a car that had huge (rubber?) testicles hanging off the back. I look at the driver and it’s a little old black woman who can barely see over the steering wheel.

No more than a truck driver in semi at a rest stop walking a toy poodle on a poddy break.

Expand your mind. People do all kinds of unexpected things.
I have done drugs with Wyoming cowboys and logged with people from Colorado.
Don’t assume anything and you will be better off,.
Half the country is nuts. Expect the unexpected.

Ppine: Yes! This! I’ve straddled a range of social strata that don’t often interact during my life and learned not to judge any person’s attitude or intelligence (or politics) based on perceived caste, occupation, appearance, ethnicity, hobbies or background. I’ve known crude, ignorant oafs with PhDs and gracious, informed “mensches” who were blue collar tradesmen. One of the most accomplished, sensitive and published poets I personally know is a big burly working Master Plumber who can’t stand pro sports.

My brother in law is a professional photographer who often travels back roads and rural areas to collect images. As an East Coast educated urban guy he had some preconceived notions about rural folk when he first started doing that. He spotted a worn old farmstead that he wanted to shoot for some high resolution black and white studies. Spotted an unshaven weathered farmer in ragged coveralls tinkering with a tractor and approached him cautiously to ask permission. Turned out the guy was not only welcoming but was a connoisseur of fine art photography and could converse with him about those artists he most admired. He was also politically astute and informed about current politics (this was shortly after 9/11) and eager to talk about the challenges of Constitutional Law and violations of immigrants’ rights. Turned out he had grown up farming but had studied law on the GI bill and been a clerk to a US Supreme Court Justice. After retiring he had taken over the farm from a relative who became too elderly to manage it and found he still enjoyed it. My brother in law took the man’s portrait sitting, in his coveralls, on the weatherworn porch of his farmhouse, holding up the letter of thanks that the Justice had written to him for his years of service.

Just last week I had my annual “geezer home visit” (which my health insurance provider bribes me to endure to assure I am not a doddering wreck tripping over area rugs and peeing in mason jars, I guess). The visiting nurse seemed a little edgy as she interviewed me and I noticed she was asking odd questions that seemed to probe my mental state and possible depression. I then noticed she was eyeing the camo rifle case leaning against the sofa where we were sitting (which I had forgotten was there.) On a hunch that was what was bothering her I told her not to be worried about that – assured her there were no firearms in the house and all that was in the case was my carbon kayak paddle, unzipping it to show her. The tension in her shoulders dropped and she seemed relieved.

Who knows, maybe the jetski was going to the junkyard? Then again, I have known people who didn’t give a crap about “green living” who bought old Priuses with defunct batteries because they were cheap and they just used them as 100% gas “beater” car. As a parallel hybrid they can be driven indefinitely without a functioning battery, though they perform badly. My brother drove his Prius (short local trips only) for 4 years with a kaput battery.

As a lesson in expecting the unexpected…
A couple years ago while running a shuttle on the Buffalo River, deep in the hills of the Arkansas Ozarks, Rob and Pam suggested a stop for supper along the way at a gas station in Low Gap Arkansas, a town dozens of miles from anything and, as I recall, without any other visible structures. The gas station appeared to have a bar and a small attached porch that presumably was the restaurant . We pulled in and the owner and his son were kicked back in their coveralls on the porch. They greeted us and went into the kitchen. I was wholly expecting to find a place serving burgers from the bar, fresh caught catfish and taters, perhaps a Friday night dinner special offering grandmas’ family possum recipe.

Wrong. As I soon learned, though I suspected I was being made the butt of a joke as it was happening, I came to find out the owner was a chef who studied in Paris and retired after a career working as Liberace’s personal chef. (Yes, that Liberace… say what?) He now enjoyed the quiet life near where he came from.
Supped that night on stuffed portabello mushrooms on a bed of saffron rice with a balsamic drizzle. That was among the fanciest dinners I’ve ever had in my life.

Succumbing to stereotypes puts us in the wrong with great reliability.

PS: Thinking about that supper took me back. I felt the desire to check out a few photos of the area we were shuttling between. If I’m not badly mistaken, these are (very nice) photos from the web of the area right near our start and end points of that shuttle. 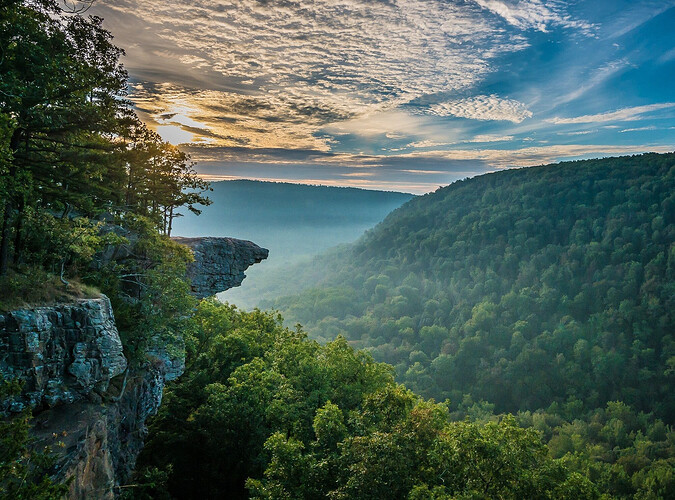 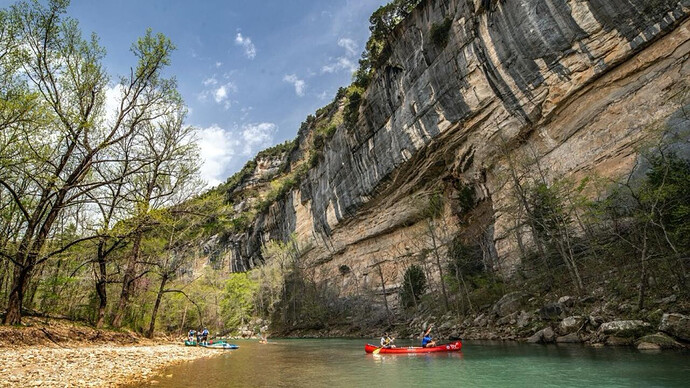 And, fellow paddlers, if you haven’t paddled that river, I’d highly recommend adding it to your “to do” list - and be sure to stop in at Low Gap (between Ponca and Jasper). Who could fault anyone for choosing to live the quiet life in such a place?

The part of the OP’s story I find most puzzling is the existence of a Prius with a trailer hitch. Wonder if it was a custom job. My dad had a trailer hitch mounted on a 50’s-era VW Beetle, and if I recall, it took him some doing to find someone to do it for him. He used it to tow a fold-down camping trailer.

Per this dealer, there’s a tow package for the Prius:

“This is the first time in the 19 years that Prius has existed that Toyota has added a towing capacity and towing accessories to the vehicle. Anyone will be able to operate the simple, easy-to-use, red and green indicator-marked towing and wiring system.”

That is my home ground and I still haven’t figured out how people from all over the country, and also, most likely from out of the country, found Low Gap. Outstanding food! When he first opened he was cooking on a very small home kitchen stove…looked like it was only about 24" wide and turning out gourmet meals.

My family had a '71 Super Beetle that towed a sailboat many weekends, while carrying 3 kids and 2 adults. We were a 2 Beetle family, and were the cars I first learned to drive. Famous words to another underage buddy (I was 15) while going down a hill, speed limit 30, before plowing into a sandbank while totally failing the 90 degree turn , speedo pegged…" They said these would only do 81!!"
A few years later, a friend was towing a sailboat with a VW bus.

My first car was a '65 Beetle and my 2nd was a '72. They sure would go in the snow… but not always where you steered them.

When I was in collage I had a mid 60s VW Square Back. Great car but the heater was terrible. It navigated many a back back dirt road.