Inflatable kayaks are good or waste of money?

Also, are inflatable kayaks any good or is this a waste of money? Are they difficult to inflate/deflate and are they durable?

I’m thinking portability key for me because I’m pretty small and it’s hard for me to be throwin’ stuff on the roof of my car…especially heavy stuff. I don’t want to bother my husband for help every time I want to go paddling at the beach.

Per comments in earlier thread, what your questions are missing is any indication about whether you plan to get some training to do this all safely before you take off on open water. Self-rescue etc.

Beach often means waves, with a tremendous likelihood of physical harm if you do not learn how to manage them.

I cartop boats a good bit bigger than me and am not any taller than you. A bit heavier but it is largely not muscle, so irrelevant to strength. It comes down to the right tools. Inflatables can be a questionable bet due to sand abrasion unless you want to spend a lot of money, folders are better suited but have the issues of handling a kayak.

But your core issue is that you have not addressed the questions on how you plan to learn to paddle safely.

There are some excellent inflatable kayaks built from polyester fabric with PVC coating and from Hypalon/nylon material that can be inflated to a rigidity that makes them responsive on flat water and calm days. Plan on spending $700 plus for anything that would be considered a “real” inflatable kayak and not a pool toy (buy the $199 Amazon boat, and you’ll get what you pay for).

Be aware, however, that on a windy day, any kayak can be a handful, and inflatables only moreso, and plan accordingly. If you buy a high volume electric inflator then top off with the hand pump or foot pump, inflation time can be as little as 5 to 8 minutes.

Inflatable kayaks range from under $100 to over $4,000 so the range in durability, performance and ease of use covers a vast spectrum.

A folding kayak would give you a boat lighter than many inflatables of the same size, better performance in open water (due to the stiffening effect of the metal frame) and less problems with having to dry it between usage. You will pay from $1,000 to $4,000 for a folding kayak. One of the best values for the lightest kayak is the 20 pound 12’ long Pakboat Puffin (24 pounds with the optional deck). Photo below of mine. 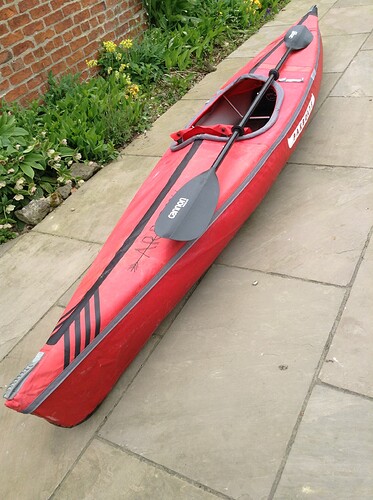 As mentioned inflatables are generally more affected by wind due to their light weight and how they can tend to ride high in the water, especially when lightly loaded. The cheaper ones more so than the more expensive ones that behave more like composite sea kayaks.

Although the more expensive inflatables are pretty tough, always carry a repair kit and inflator, even for short rips.

If the issue is not wanting to put heavy items (kayaks) on a car roof, there are other options to consider. You may want to read an article on Kayaks and Small Living Spaces online at California Kayaker Magazine - South West's source for paddlesports information in issue #9. Some of the options for small living spaces would also help what you are looking for. It talks about inflatables, but also sectionals and folding - possible options for you.

I am a 4’11" woman, and last year I bought an inflatable kayak for exactly the same reason as you - I didn’t want to be dependent on my husband to help me load a kayak on my car. I did some research into folding kayaks, mostly the ORU, but to be honest, I wasn’t fully aware of all the options out there that others have mentioned, so you should definitely spend some time doing some research. As I mentioned in the other post, I got the AE ultra light model - only 17lbs (without a pump and other gear). You should be aware that some inflatables are actually quite heavy - some that have higher ‘performance’ ratings were heavier than I wanted. From a portability and ease of use, I was extremely happy with this kayak. From a performance standpoint, I was satisfied. I have previously paddled some pretty nice true sea kayaks on multi-day excursions, and done day rentals of a pretty big range of recreational kayaks. I would say the AE ultralight was comparable to a decent recreational kayak. It tracked pretty well, but felt a bit poky at times. I was mostly using it on slow moving rivers and in our area reservoirs. It isn’t really suited to any kind of open ocean environment. This year I have decided to purchase an Eddyline Rio - which I chose for several reasons, keeping with my portability theme, the biggest one is its light weight. It is 35lbs, and I can lift it easily myself. I will be spending the next month or so while I wait for water temps to increase to practice getting it on and off my car myself! I still plan to keep my AE inflatable and expect there will be days where I am not feeling like loading the Eddyline and will toss the AE in my backseat and go.

The only inflatable kayaks I have seen looked like kites in the wind. Part of that might have been the people in them and the lack of athletic enthusiasm they were showing. I honestly do no know how they got back to where they started from.

I think inflatable kayaks are pool toys and are unsafe anywhere else. Inflatable SUPs would not be much better if younger and stronger people weren’t the buyers.

Sorry, but I think you should go somewhere and take some classes, then go and rent a few boats. That way you can build the muscle groups to paddle a whale back up a rip current, or something similar. The energy in the water at a beach can be deceiving and also unrelenting.

Any interest in canoes? We will be picking up a wee Lassie soon for my wife, who is the same size as you. 10’6" long and 13lbs. She’s be using a kayak paddle, but we only do open water and lazy rivers, at least for now.

OPer is saying ocean, at least in her other thread. And has not supplied any information about the conditions at the beach other than to infer that the water crashing on it is salty, and appears to be a solo paddler.
The canoe you mention is a great boat but not suited for beaches with breaking waves or travel near inlets and outlets, unless in the hands of a paddler who is not a beginner.

Hadn’t seen another thread. To be fair, beach could mean lakes as well, but I agree, a canoe is entirely inappropriate for the ocean

what type of kayaks are best for ocean, because summer are about to start and im bout to buy a kayak but no idea which kayak will be suitable for ocean.

OPer has steadfastly not responded to questions re their own overall preparedness or to get a couple of classes before buying anything.