Inflatable Roof Rack (or other type)

I have a trailer to transport my kayaks back and forth… my issue is when kayaking down a river (this coming summer), i’m going to leave my one car and trailer at the drop off location, and i’ll only have a hyundai elantra at the end location where we finish.
Looking for cheap roof rack options (can’t find anything used online for my car). I’ve been seeing the inflatable roof racks that might be a good option to get the kayaks back to point a, where my trailer will be parked.

Any experience or thoughts would be appreciated.

High density foam ones or even pool noodles/ pipe insulation

I agree with JackL. Strap a couple of the hollow pool noodles to the roof, running cam buckle straps through the car (with the doors open).

I actually have a Malone inflatable roof rack that I bought to take with me to use with my rental car on an overseas trip to carry my set up folding kayak. It worked great for that and was so compact to carry that it was easy to take with me. (see pics
below, but bear in mind the Citroen had lateral racks already that I could fasten the inflatable pads in between and I could strap the 24 pound boat directly to those.)

But I don’t think I would be comfortable using the inflatable rack with a hard body boat – my folding kayaks all weigh 22 to 37 pounds and are OK on the inflatable tubes at moderate pressure, but I would be concerned that a heavier boat would require higher inflation to support the weight, which would risk a heat expansion rupture on a hot day. 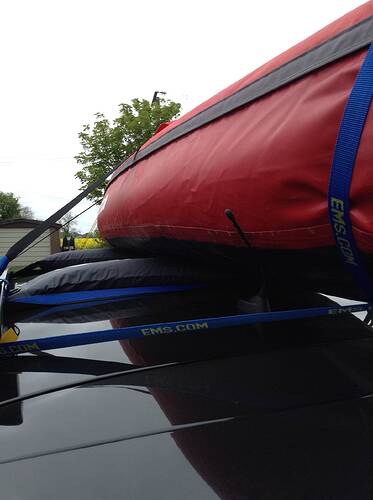 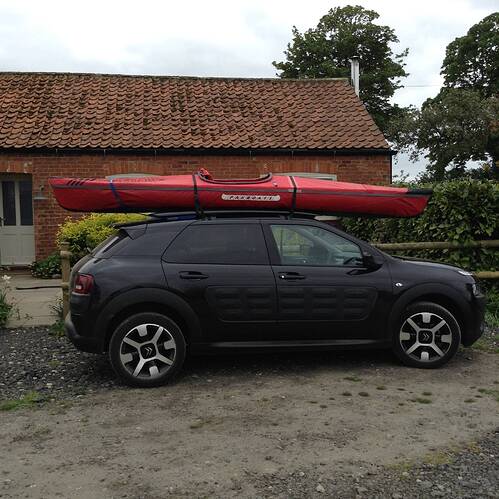 Yes, my yaks are 40 and 47 lbs… it was a concern of mine, but it says it’s rated to 100 lbs.
I need something easy, so the foam blocks or pool noodles are a good call.

“Rated” and optimal function in real world conditions don’t alway coincide. As one who has used folding kayaks with inflatable sponsons for most of my years of paddling, I can testify to how overheated high pressure vinyl tubes can rupture. I always carry a patch kit (in case I’ve neglected to release the valves when I pull the kayak out of the water), and the repair process is not that difficult, but a failure is a failure and can be very inconvenient.

@Photecs said:
Yes, my yaks are 40 and 47 lbs… it was a concern of mine, but it says it’s rated to 100 lbs.
I need something easy, so the foam blocks or pool noodles are a good call.

Pool noodles compress very easily. I think you’re better off with foam blocks, such as these allegedly non-skid: https://tinyurl.com/y99bvqml

Just be sure to use cam straps (not rachet straps) and bow/stern tie-downs.

Paddle with more people. Put the trailer at the take out and shuttle drivers back to the boats at the put in where the boat guard is.

@Overstreet said:
Paddle with more people. Put the trailer at the take out and shuttle drivers back to the boats at the put in where the boat guard is.

“Boat Guard”… I like that. Never knew what to call that person until now.

Just be sure to use cam straps (not rachet straps) and bow/stern tie-downs.

Why not ratchet straps? I just bought some! Lol.

Oh man, who was it that posted that great picture not too long ago? Repost it here or link to the other thread. A picture is worth…

Never mind… since reading his post, I’ve read posts, watched videos etc if many , many people warning against ratchet straps.
Guess it makes sense. More so for expensive yaks, not so much rotomold, but still.
NRS cam straps it is!

Ratcheting straps are worse for rotomold kayaks than for any other kind! Cranked down, they will deform the kayak horribly as the plastic softens in sunlight or even warm air from radiation off the pavement. A local friend I often day-paddle with had a nice Riot Edge 14.5 rotomold kayak but she ruined it by leaving it strapped to her car with ratchet straps – she doesn’t have a garage and has to climb 3 flights of steps to her cramped yard so often left the boat on the car for multiple days. The boat is so warped off center now that she has to paddle twice as hard on one side as the other and it still won’t track worth a dang. And most people have seen rotomold kayaks that are oil-canned (flattened) on the bottom hull from sitting on racks or flat surfaces in warm weather. Ratchet straps = big no-no