I see a lot of posts and reviews from people for Inflatable SUPs where the reviewer has almost no experience with stand up paddling. There are some high quality inflatable SUPs but most of the low cost / bargain inflatable SUPs are going to be a major disappointment for people who want to do serious touring or surfing.

I am posting this after watching two guys who were at the beach this morning trying to inflate a SUP with a hand pump. They were pumping like mad and not making any progress. I usually go for a 3/4 mile warm up paddle before I surf in the mornings, and when I got back from the warm up paddle they were still pumping. They finally got their large SUP out in the waves but it was not inflated enough and did not have enough stiffness to stand up on it, so back to the beach and more pumping, finally one guy managed to stand up, but he spent most of his time laying face down and getting washed in sideways, since he could not kneel and stay on board. I could have surfed better on a air mattress. You can buy a decent used SUP for around $400 -$600, the sky is the limit if you want to buy a high performance board. Be sure to try out conventional SUPs and give them a test drive before you spend money on a bargain inflatable or any inflatable for that matter, unless you intend to travel with it extensively. SYOTW

Sounds like these guys had no idea what they were doing. The benefit of a good inflatable is that it fits in the trunk of the car and is ready for use at all times. Not possible with a hard board.
Too bad you didn’t shoot some video. I would have enjoyed a good laugh. 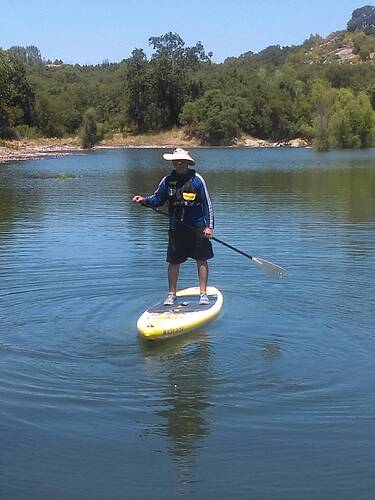 2448×3264 532 KB
Been supping for 5 years and after dealing with hard boards, I sold them off due to cracks, dents, and lamination on one board. I recently demo paddled 3 inflatable boards: Earth River Skylake 11’, Isle Explorer 12’, and Body Glove Performer 11’. All paddled well with very good speed and handled waves/currents with ease. Build quality on the Earth River and Isle is very good, but the Body Glove model is excellent and built like a tank. I chose the Body Glove for performance and build quality. It’s almost over built, but seriously well constructed with high quality materials. The best part? It’s priced almost half of the others! It’s listed on Costco.com (also on eBay and Amazon) online with fast shipping. I’m not a small guy at 6-2/218lbs and it handles my weight easily. It’s rated to 325lbs, but if near that, I suggest you try before you buy. This move from hard boards to inflatables has been my wakeup call for easy of transport, performance, safety (hard board hits are painful), and durability. I know of a few paddle board rental companies who have moved from hard to inflatable and their repairs have dropped to almost nothing and a statement to a good inflatable’s toughness. So if one is shopping for a paddle board, do yourself a favor and try a inflatable. Regarding performance: I cannot tell and drop in speed or turning with a inflatable vs hard or soft board…these new inflatables with the high pressure, drop stitch technology is impressive.
kocho October 16, 2019, 2:22am #4

One thing negative with the newer crop of 6" thick boards is, well, the thickness. At 200lb I appreciate the extra flotation and stability that comes with a thicker board. And the extra stiffness. But they are much more affected by wind, almost 2x slower to inflate, and harder to climb back on as they float high and don’don’t sink down easy for you to slither on top. And most can’t carve on edge like a hard-edged hard board. But most users who do not surf don’t need to carve. These things surf forward on beach break and in following seas/downwind just fine.

As for the guys that spent and long time pumping? No idea why. I can pump my fairly voluminous NRS Adventurer 12’6" by 6" thick SUP to 15 psi in less than about 5 minutes. The 10’ by 4" iSUP it replaced for me was faster to inflate. That’s with a simple double-action hand pump. And I do get a good warm-up doing it, so someone not in good shape will need to take breaks and take a bit longer.

A friend swears by his Walmart $250 with convertible kayak/sup paddle and pump 10’ setup. I tried it and he tried my 3-5x more expensive Adventurer - big difference in stiffness and speed, no question. But his cheap board is just fine for his needs and in some ways more enjoyable than a big fat board: less susceptible to winds, more maneuverable, easier to get on from the water, has seat and foot rest for comfortable kayak-style paddling, and plenty fast enough for him and his friend to spend a couple of hours on flat protected water 3-4 times a week. He uses an electric pump, btw, and I’m still faster pumping with my hand pump

Yes, I’ve paddled a friend’s 14’ racing carbon-something SUP - I’d like to have one too for its better glide, but I can’t roll it up and take with me on family vacations or let half a dozen kids batter it in the beach break for hours every day…

By the way, my first iSUP was a Sevilor Samoa - bought barely used for $250 on eBay. This thing survived many overseas trips, lots of beach break surfing and kids play, reef/snorkeling duties, and some local river running. Not to mention the airline luggage handlers :). Can’t complain… Never had to repair it, other than than one of the d-rings broke, and the pump house finally burst after about 8 years of use.

From the sounds of it, the problem was likely with the users not the product. Inflatables just keep getting better and better, and even the budget boards out there these days are fairly decent.

Truth in advertising here. Paddleboarder is running a commercial website for inflatable paddleboards.