In my case, from Germany. We took them to our Pocono house and we paddled Brady’s lake. Putting them in nice boats, with good paddles made the experience even better. They thoroughly enjoyed it. A bonus was seeing a bear as we drove out! 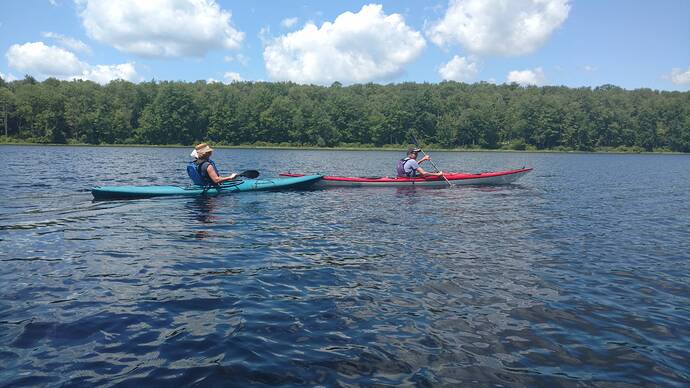 Went shooting this morning
A guy, who was an excellent instructor, brought 2 teenage girls from Norway. The kids shot rifles from .22 to 30 cal, a pistol, and shotgun.
They safely had a good time . Last time it was. two guys from China.

Were the foreign visitors surprised you could actually do that?

@Andy_Szymczak
Had they paddled before? They look very comfortable.

Never paddled before, I gave them some instruction before actually going out.

Were the foreign visitors surprised you could actually do that?

They didn’t appear to be.

@Overstreet said:
Were the foreign visitors surprised you could actually do that?

It’s the US of A ! Everyone carries a gun, don’t they?

I know several people who have CWP who never carry, me included.Carrying is a pain. Why does anyone want an object trying to pull your pants off or rubbing a hole in your hip?
IMO , if you NEED to carry, move or get another job.

Oh, on the flip side, I recall the story by one friend here about what I seem to recall was a get-together of either extended family or a family and friends, where the daughter of one couple came with her boyfriend whom her parents greatly disapproved of. While many people paddled solo boats, a wise paddler suggested that the daughter and her boyfriend be put in a tandem canoe, and her parents ended up being quite pleased with how quickly that led to their breakup!

@Guideboatguy said:
… and her parents ended up being quite pleased with how quickly that led to their breakup!

Before divorce
let’s set a course
for those mom/dad eschew!
Oh boy, to end
daughter’s disliked friends,
hull them off in your canoe!

But then, there’s very few of us that do not prefer singing, Oh Solo Me, YO! (The LeMares are a rare breed, indeed!)

@Andy_Szymczak said:
. A bonus was seeing a bear as we drove out!

I want to know if you got an answer to the ages-old question. Did the bear make a potty stop in the woods? Even if you can’t provide insight into that question, it sounds like a great day with your relatives.
From my experiences, the answer is: Yes, they do.

Going canoeing with my Canadian uncle is what got me started. I have tried to return the favor by doing the same thing for others. Everyone has seemed to enjoy it, although I don’t know as anyone has ever taken it up as a hobby.

I still remember when my brother ran my Kevlar Bluewater Tripper 17 straight up a concrete boat ramp as I watched from a distance in my Northstar. My fault I guess!

Here is a video I took of them paddling.

Says “This video is unavailable.” ??