I’m interested in purchasing a used woodsman canoe. I have no other info, but I was told it was not the woodsman III. would anyone have any information on this. I’m just getting into canoeing and am looking for something for lake camping and few day river trips. 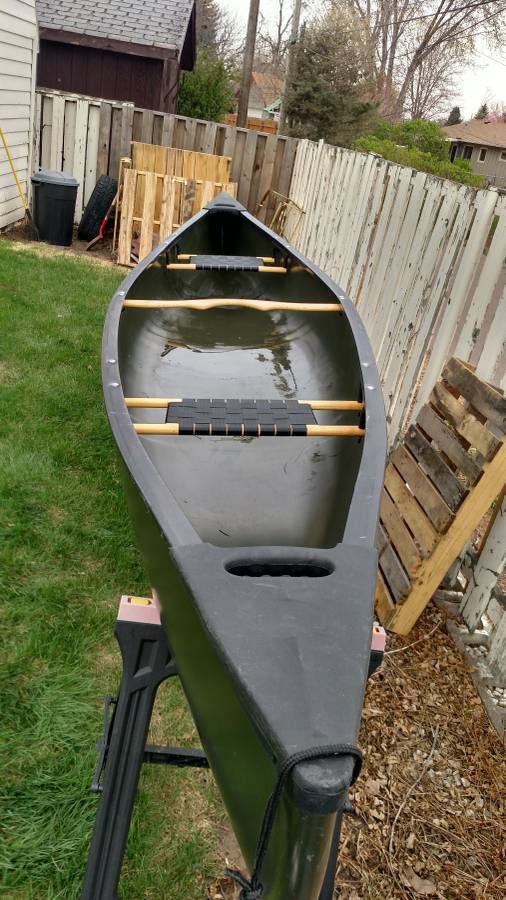 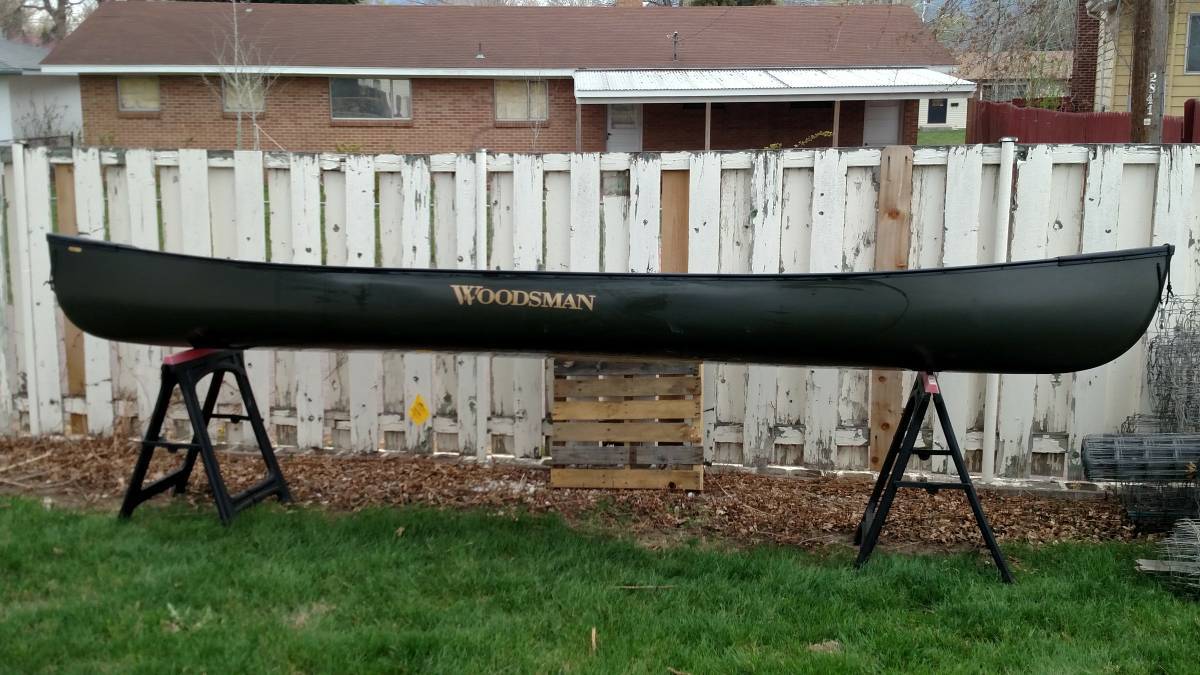 I think a few companies were pushing Woodsman canoes: Dagger/Mad River, Bell. The grab handles/top decks look like Mad River Canoe. Check the hull ID on the brass name plate, which would begin with MAD and end with two numbers indicating the year of manufacture. Looks to be Royalex. I believe I read somewhere that the Mad River woodsman was the Horizon 15, which you can read about here: http://www.madrivercanoe.com/us/sites/default/files/2006%20Mad%20River%20Catalog.pdf

It was made by a manufacturer for a big box store which sells them under a different name.
I agree check the serial number; and the first three letters are a code for the manufacturer.

This same discussion came up about ten years ago re the Woodsman Canoe sold by Dicks Sporting goods. Its a convoluted tale for sure. Happy reading!
https://forums.paddling.com/discussion/501503/dicks-woodsman-again

There were a number of different “Woodsman” canoes which were different hulls. I believe that is a Woodsman III. The Woodsman hulls were molded by major manufacturers like Bell and Dagger, and then sold to franchise sporting good stores which trimmed them. The trim quality varies. All the Woodsmans I have seen have been that drab green color Royalex. The Woodsman III is a quite decent hull.

My Woodsman III is the non-Northwind version - no tumblehome.

I appreciate all of the information. the name plate reads “WEMSPARNE606”. I was told it was 16’. Purchased in Colorado.

manufacturer ID WEM pulled up CONFLUENCE WATER SPORTS. which does list Dagger and Mad river as two of their brands.

I just bought one on an impulse that looks exactly like this one - all the way down to the black resin seat drops.

Appears to be in near new condition, except for a little moisture darkening at one end of the portage yoke.

It was a really good price and only 100 miles round trip to get. Included two of the better Feather brand paddles and he threw in a sand chair for the 3.5 year old grandson to sit on in the middle.

What appealed to me about this boat, other than the price, was the little bit of tumblehome on the gunwales, which I prefer over the straight sides of my 15.6’ Woodsman III.

I didn’t take pictures and didn’t get the seller’s pics copied before he deleted his Craigslist ad.

Did anyone ever figure whether Dagger or Mad River made these boats and which model it mimics?

Pics of bow deck plate, seat drop and name on side. 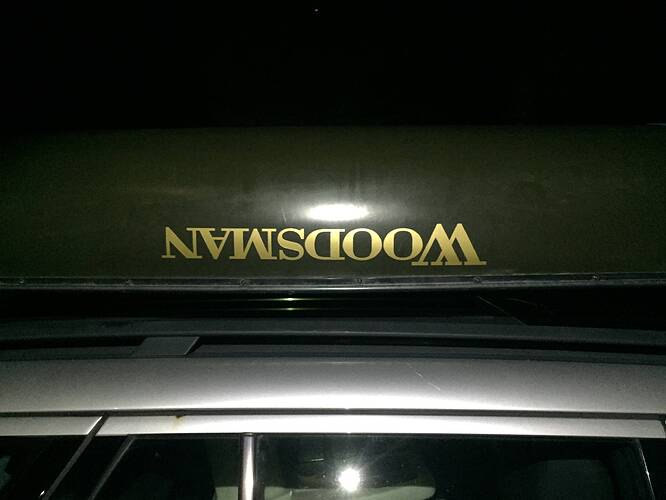 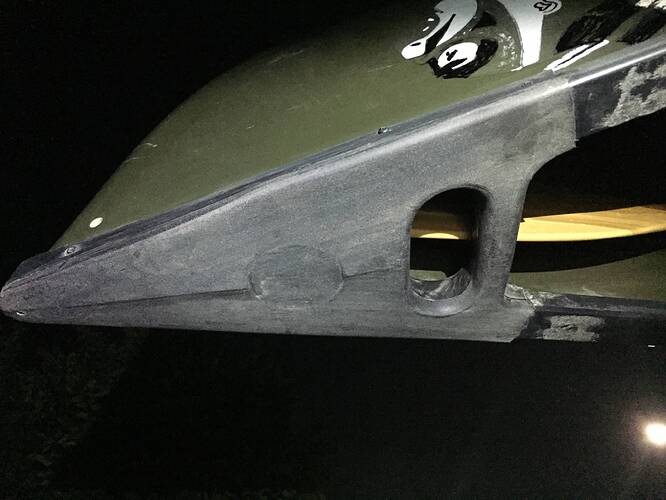 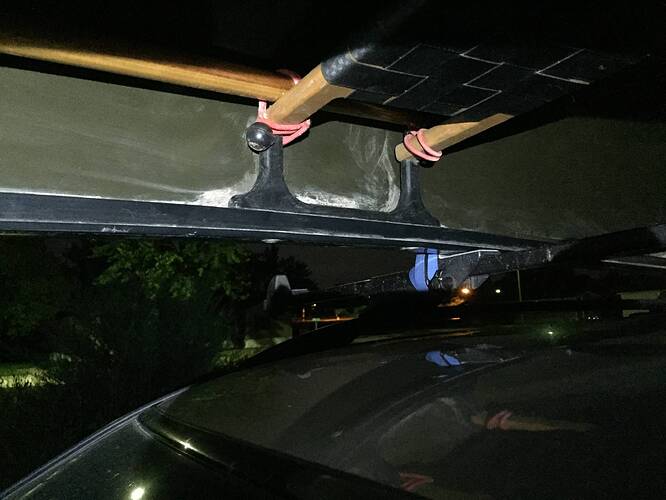 Confluence. Makes Mad River canoes but among other things… Don’t try to equate it with an old time Mad River. Now as the thwart darkening. Do not blow it off. That thwart has a rotten end. Take it out and check that the end is not soft. Varnish the end grains.

That’s a confluence watersports hull with Mad River outfitting. The deck plate circle would have had the smoking bunny. Hard to see it in the original posters pic but it’s there too.
And those drops are a dead give away. Check out the Mad River IQ gunwales stuff to see.

After confluence acquired Dagger they ceased branding of canoes with the dagger name. all subsequent have been Mad River (or as in this case woodsman). They did dust off a few of the dagger molds and pressed out some hulls branded MRC. I suspect that is the Horizon model but only measurements will tell.

Confluence Holdings was also formed in 1998 when it acquired Mad River Canoe and Wilderness Systems. It later acquired Wave Sport.

Dagger exited from the canoe making business in late 2003. At that time, Dagger transferred to Bell Canoe all Dagger Canoe warranty business, as well as the rights to make and sell the popular Ocoee whitewater canoe.

Confluence Holdings did not acquire WaterMark until two years later, in 2005. After that, Confluence began making and selling some erstwhile Dagger Canoe designs such as the Caption, and the 15 and 16 foot Legends with the Mad River Canoe badge.

I agree the boat in question looks like a “Mad River”, whatever that means these days.

Thanks pblanc. Nice to learn those details. I love my old Dagger Canoes. Always presumed it was typical corporate merger / market forces rationale, but do you have any more info on why WaterMark dropped Dagger canoes? Interesting about the warranty business going over to Bell. Seems like the old Mad Rivers were the ones that always cold cracked near the stems or everywhere.

I have heard a lot of reasons but the bottom line is it was all about the money. By 2003 interest in canoes had dropped off significantly compared to kayaks. Roto-molded kayaks were quicker and cheaper to make. The could be shipped more economically and were easier to inventory back when there were still real retail stores that stocked and sold canoes.

After around 2000 or so, OHSA requirements had mandated changes in the formulation of Royalex material. This and perhaps worn out original machinery resulted in a fair amount of Royalex sheet that was subpar, and some had to be rejected. I remember many complaints from whitewater open boaters around that time that the new Royalex was softer and wearing out much more quickly.

Here is a short article with comments from then Dagger president and original founder Joe Pulliam. I rather doubt that Joe wanted Dagger to stop making canoes, but WaterMark did, and they then owned Dagger.

The tale of the tape:

15’2.5" tip of bow to tip of stern. Probably closer to 15’2", if tape was completely tight without sagging. I was measuring without assistance.

The two bands across the belly of the hull appear to be reinforcement, presumably to reduce oil-canning and hogging - you can feel that they are raised on the inside of the hull. 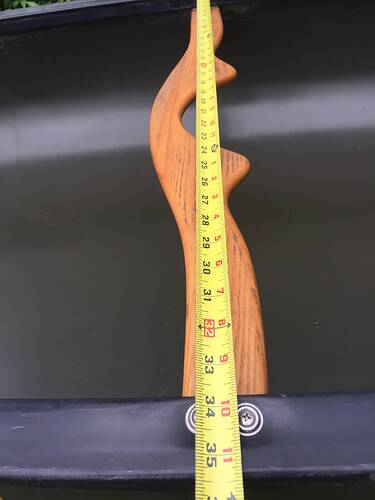 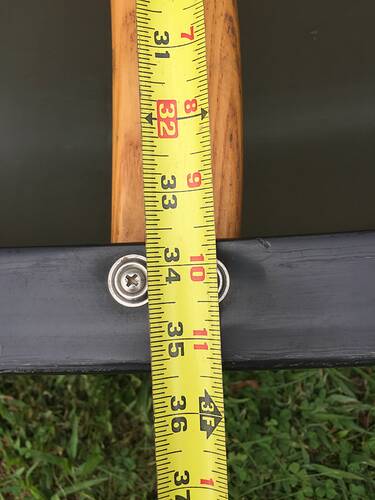 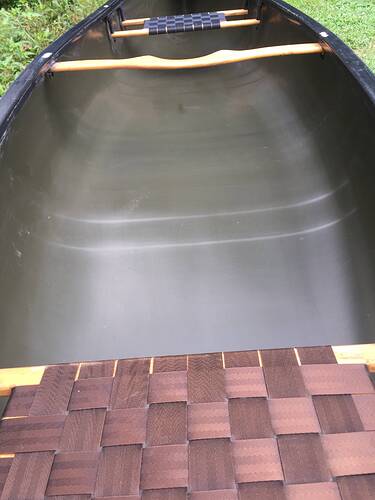 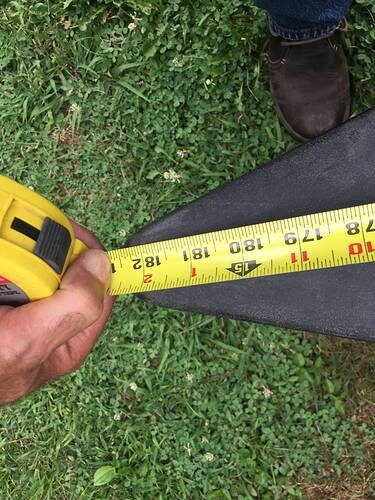 Well, you know the canoe was certified by Confluence in March of 2006. Dagger ceased molding canoe hulls in 2003 so it isn’t a Dagger hull and from the MIC we know it wasn’t molded by Bell. So that leaves Mad River.

Although MRC molded several 15’ Royalex tandem hulls, the 15 foot Royalex Explorer can be ruled out because it had a distinct shallow V bottom. That leaves the 15’ Legend and the Horizon, which was in fact 15’ 2" in overall length. I am pretty sure that is not a Legend.

The catalog lists a maximum beam of 34.75" and a gunwale beam of 32.75". But MRC tended to measure gunwale beam at the molded hull, and you measured outside of outwale to outside of outwale, which usually adds a couple of inches. Also, those re-badged “Woodsman” hulls typically did not have the same gunwales and deck plates as the stock parent hulls sold under their actual brand names wore. So that could also change beam somewhat.

What stops me from accepting that it’s a Horizon 15 equivalent, is that I find no mention of tumblehome in either the reviews or online Mad River descriptions and none is discernable in the online catalog pictures.

Am I missing that somehwhere?

Oh, well I guess it may be it’s own entity and not really handle like any of the former Dagger or Mad River hulls.

At least now there are some length and width measurements online for the Dick’s Woodsman. This boat was purchased at Dicks, according to the original owner.

I find that it is often very difficult to establish the presence and degree of tumble home from photographs. You know that the Horizon had to have some, since the maximum beam is 2 inches greater than the gunwale beam. I am quite sure that no maker ever molded unique hulls Galyan’s or Dick’s to sell as Woodsman canoes.