The Spam Museum is a good two hour visit if you get to Austin MN and need something to do. It seems to me there are 26 different varieties of Spam. Unfortunately for the soldiers in WWII there was only one back then. There is a letter there from Gen Eisenhower that basically thanked the company for Spam, said he liked it, but didn’t like the frequency which they were forced to eat it by the Army. It packs well for camping and can be in the small can.

My Army didn’t serve it, but my Mamma did. Seems like that was always my sammich in grade school.

It is made of pork shoulder and butts. The same thing as southern pulled pork BBQ. Just cooked differently.

I really like the single slices in the foil pack. They are perfect for a sandwich or fried in a small pan. Often use them as my paddling lunch of choice.

Eisenhower liked it, but didn’t like the frequency the Army forced them to eat it?
Nobody forced him to do anything!

Surely he was jesting…
He was the Supreme Commander.
He wasn’t out on the front lines.
He was “in the rear with the gear”, and moved from one “liberated” chateau to another.
He had his own personal staff; driver, security, cook, barber, and aide de camps tripping over each other, prepared to kiss his ass. Any person with any type of expertise he needed was at his beck & call.

Including, his English paramour Kay Summersby, who keep his feet(and other things) warm during those European winters.

You’re not in Kansas anymore ToTo!

P.S. I was an NCO, and in my 12 years in the Army, nobody forced me to eat Spam.
Ike was a 4 star General; nobody forced him to eat anything!.

Poor Ike; pining away (alone) in his French chateau, eating his Spam sandwich.
Wife Mamie in photo with Ike, after the war.
She was certainly a “hottie”.
The general was lonely. Mamie wasn’t there…
Kay, his driver was… 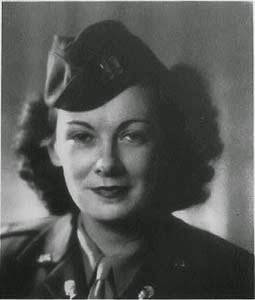 The girl (in uniform) Ike left behind; Kay Summersby.
"Damn! the war’s over; no more Kay, no more French chateau; no more Spam.
I gotta go back to Kansas; what a downer dude! 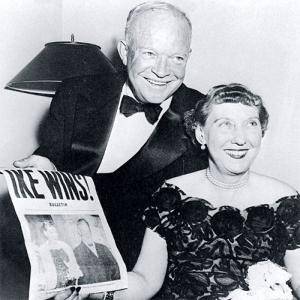 “I Like Ike” the first political slogan I can remember.

As for Spam I could never even bring myself to try a bite but I was a picky eater and a spoiled rotten kid.