Since I won’t be paddling in my favorite place this year here is a vignette from my last visit to the BC Coast. 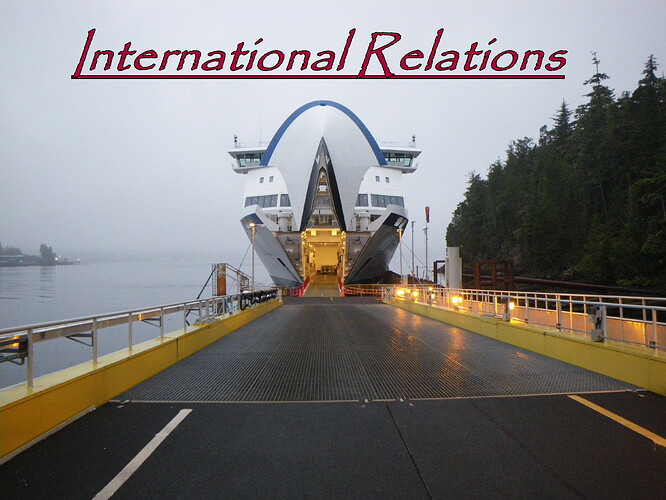 Solo adventure kayaking presents some challenges that aren’t present when traveling with a team.

For this final reason, in part, my ferry ride from Port Hardy to Klemtu was an interesting and uncomfortable exercise in personal shortcomings and international relations.

Passengers with kayaks are the first allowed to board the Northern Expedition in Port Hardy as we have to move our boats from the ramp to the far end of the ferry. I happened to be to only traveler with a boat so I was the very first to board. As the first walk-on I made my way to an upper deck and my favorite seating area on the starboard side just outside of the Aurora Lounge. Being first in gave me my pick of seats so I chose a high-backed seat front and center to a set of tall windows. Soon others filed in and a tall European man asked me if the seats were taken.

“Only this one that I’m sitting in” I responded with a smile. 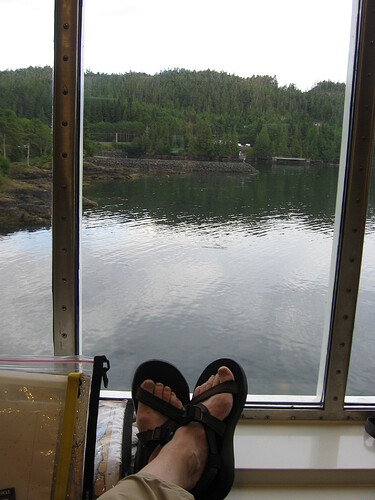 Soon he returned with an entourage of older German speaking folks. They quickly snapped up all of the seats except for the one beside me. Several walked up to the seat and looked down at me as if to suggest that I should move elsewhere so that they could have my place. Their posture and glares seemed to say “If you move somewhere else we can sit here”. I was wearing my best welcoming face because I was really looking forward to the company but had no plans of moving. The group in the adjacent trio of seats had an animated conversation that was interrupted only by glances at me and the adjacent seat. It was as if they were trying to figure out whether to ask me to move or failing that which among them would be so unfortunate as to sit next to me. Finally, a fair-haired woman sat in the seat sideways with her back to me.

I still had hopes for some friendly conversation over the next 8 hours so I extended my hand and said, “Good morning. My name is Jon Dawkins. What is your name?”

She hesitantly looked at me and took my hand with the same expression and enthusiasm you would expect if she were being forced to, barehandedly, pick up a pile of human waste. She said that her name was something that started with a “D” had three syllables and sounded like she was clearing her throat. I asked her to say it again so that I could get it right, which she did, but that didn’t help me in the least. I made my best attempt at saying her name and told her that I had never heard the name before and to please be patient with me as I might have trouble getting it right but assured her that I would be able to say it correctly before we arrived in Klemtu. I was certain that my attempt to say her name and establish a relationship had fallen far short of expectations when she stood up sneering and vacated the seat.

More heated internal discussions ensued within the group accompanied by glances in my direction. I had no more idea what they were saying than what my attempt at pronouncing the woman’s name had translated to in German. Finally, a large woman from the group sat down and did her best to ignore me. I’m still not sure if she had drawn the short straw or was hoping that I would say or do something that would give her justification to lay a lethal dose of whoop-ass out of me. She was large enough to do it. Clearly my wishes for conversation were at risk.

Our awkward silence continued and when Humpbacks were seen breaching outside of our windows, she and everyone else in the seating area stood and camera mayhem reigned. With every splash she pointed and shouted “Da! Da! Da!" Whenever she pointed and said “Da” the group aimed their cameras and fired off a succession of photos in that general direction. The breaching whales were followed by a pod of Orcas and lots more “Da! Da! Da’s!” Too soon, however, actual mammal sightings were replaced by splashes from waves breaking on reefs and rocks and still she shouted “Da! Da! Da!” ordering cameras to click and whir. Out of my depth, I left to go walk the deck.

When I returned, she looked me in the eye and said, “Mein Gott!”. I don’t know who she was saying it to but it was loud enough for everyone in the cabin to hear and it was clear who she was saying it about. With that stunning “endorsement” I went into the restroom and checked myself over to be sure that I didn’t stink (I didn’t) or that my fly wasn’t down exposing me for all to see,(it wasn’t). I was wearing my favorite Icebreaker wool top which I would be wearing for the next week and a half and it had small holes in the shoulder and one arm. Could this have been my transgression?

I paused in the aisle behind the three rows of window seats steeling myself for a return to the breach. The European folk were deep into an animated conversation and my new best friend was gesticulating wildly. I walked up to my seat and all conversation abruptly ceased. I glanced across the group and all eyes were quickly averted. Not a sound. No eye contact. WTF?

The last actual wildlife sighting (a leaping Salmon) occurred in Lama Passage. After that distant rocks, reefs and shoals produced splashes and an occasional boomer which elicited Frau Blucher’s orders to the troops of “Da! Da! Da!” to which they would salute smartly and charge up the hill with cameras clicking. Once into Milbanke Sound Susan Rock, Vancouver Rock and Fellowes Rock all put on spectacular shows. Their black seaweed covered and barnacled rock backs glistened while “flukes” stretched up to touch the sky as they frolicked and cavorted, all the time never taking a single breath…………. 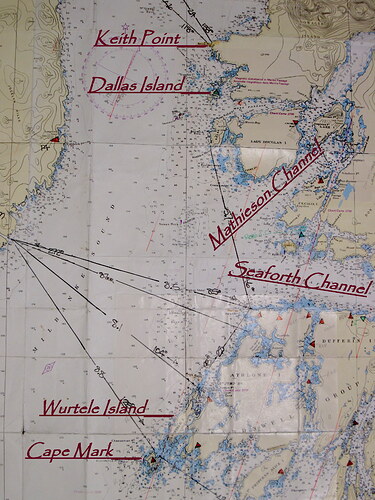 Groups of animals and sea life have peculiar names. On the BC Coast you may encounter a School of Salmon, a Galaxy of Starfish, a Pod of Orcas, a Pack of Wolves, a Convocation of Eagles, an Unkindness of Ravens, a Gaggle of geese, an Army of frogs, a Murder of crows, a Bed of clams, a Sleuth of Bears, a Romp of Otters or a Dance of Sandhill Cranes.

A group of rocks, reefs and shoals is something else, though, and Frau Blucher insured that her group of friends returned to Germany with lots and lots of pictures featuring “Shxt-loads of Rocks”.

I hope next time you are surrounded by tourists they are Spanish. After my solo trip to Andalusia two years ago I can assure you that if you had found yourself amongst that sociable clan you’d have been love-bombed, asked all about your home and family, told you were handsome, repeatedly kissed on the cheek, pressed to accept food and drink, invited to visit Spain and stay in their homes and introduced to any handy eligible daughters and nieces.

i had a similar encounter with a clutch of arrogant Bavarians (could tell by their accents) tourons during a long gate layover at the Minneapolis airport back in my 20’s when I was en route home from 3 weeks of backcountry camping and Alpine mountaineering in the Canadian Rockies. I was rather scruffy and rumpled, wearing my battered climbing boots and the only clothing I had been able to rinse out in a stream and dry over my tent poles the day before my companions dropped me at the airport.

At that time I was still fluent in German, having
had 6 years of it in high school and a year at college level. I endured in silence their dirty looks and extended discussions of the “filthy American hippie” and cracks about them hoping they would not be seated near me because they might get fleas or worse.

I had a first class seat that trip, having collected free upgrades by volunteering to give up my seat on prior flights that year, so I was eventually called to board before my critics were. As I arose to head to the gate I detoured to pass the cackling krauts, paused to get their attention and then pronounced, in flawless Deutsch: “The best education for a clever person can be found in travel. Goethe said that, by the way. And I’ll try to keep my fleas up in first class. Enjoy your trip.”

I would loved to have seen their faces!

They were very shocked and pink. And all but one averted their eyes later when they had to squeeze their well-fed carcasses past my seat in first class. I smiled and winked at the lone guy who met my gaze.

I too am fluent in German, have overheard many conversations, When I have more time, I’ll relate some of them.

I remember being a “dirty hippy” busking around France and many of the American tourists would assume I was French and couldn’t speak English so would make all sorts of nasty remarks when walking past. The presumption that if I was French I couldn’t understand English was bizzare but also the sheer vitriol directed at the “locals”. I mean they were totally right, I was very much a dirty hippy but still! If I was feeling cocky I would usually just thank them for their shite patter which would just confuse them more.

I have met and hiked with Australians without a disparaging word. Worked with Mexicans and Chinese with the same result. And met an interesting guy and had a great conversation passing through Japan. Then there was 13 months in Korea working with them every day.
The only language I know is English but I’ve found bad attitudes show up quickly esp. if you project one.