Is a 17ft kayak too long for a beginner?

I was looking to buy my first kayak and after some advice from here I decided to go for a used kayak.
I was looking at a Necky Looksha 17 ft kayak. I can get it for a good price.
My questions is: Is a 17 ft kayak too long for a first timer? I worry about it being to long and narrow (23.75 inches) and not stable enough. I would be using for flat water lakes only, at least in the beginning.
I’m 170lb and 5’10".

Thanks for the input!

I use a fiberglass Necky Looksha IV. It has a modest vee bottom with hard chines which will make it feel a little tippy for a beginner. It’s not like it will capsize immediately, but it will take a little time to get used to it. Mine also has a fairly low backrest, not the big, high backrests you see on beginner kayaks. You need to sit upright and use the backrest for support, but not lean back into it. Size-wise, I’m similar to you. If the Looksha you’re looking at is like mine, also be advised that the cockpit is fairly short front-to-back. You should be able to fold up your legs to get in and out, but there won’t be a lot of room to spare.

A good boat with plenty of speed and room for overnight equipment.
Learn to brace and your confidence will build.
I do not like stubby like plastic boats.
A cockpit is what you want.

That’s a great kayak. Even if it’s a challenge at first you’ll be glad you have it. Stay near the shore and face the boat wakes head-on and you’ll be fine.

23.75 is actually pretty wide for a sea kayak. As others have noted it’s going to be pretty good. I started with (and still paddle) a Pygmy Arctic Tern 17’ that is 23" wide. Once I got used to the slight V hull & hard chines I started to think that it’s too stable. I’m an inch & a half shorter but was about the same weight when I started.

I bought that exact model, a Looksha 17, for my brother (used, for $600 with paddle and PFD, from a retired outfitter) who was a beginner when I gave it to him and he is about your size. Works perfectly for him. Quite stable and works fine on the smaller rivers and large lakes where he mostly paddles, though he has also taken it to Cape Cod a couple of times since I gave it to him 4 years ago. If you can get that for a good price it’s a nice boat and quite versatile as well as durable. Just make sure you check the bottom for oil canning, which happens with those if they are stored wrong. Hull should not look flat, dented or caved in when you flip it over and check.

17 feet is not too long. One thing I’ll add: Some kayaks are not perfectly stable when absolutely upright. Some kayaks are designed to be more stable when sitting a few degrees left or right of center. I don’t know if this Looksha is designed that way but if it is, don’t let it make you uncomfortable. When you’re stopped on the water just let the boat tilt / settle a few degrees left or right of center and be happy and secure knowing that it’s NOT going to keep going over. Hope you enjoy your new boat.

The Looksha 17 is a tried and true performer, there was a period of time when they were all over the Maine coast. You are an average sized paddler for the era of this boat, so the fit should be fine.

Yeah, it’ll feel a bit mobile to you at first on flat water. But a proper sea kayak does to everyone at first. They need to be able to rock side to side to handle waves and on flat water its chines aren’t finding anything to stop them in the upper part of that motion. But you get used to that. And it’ll haul a ton of gear if you want to camp.

The only ongoing complaint about this era of Necky’s design is that it will have a tendency to weathercock. But it is ruddered so that can be managed. If you find you hate having to manage the rudder - I did on my first sea kayak - this boat will take something like a SmartTrak system where you can set a rudder angle and still have a static pedal.

If you’re looking at the somewhat newer plastic Looksha 17, I think it may have a little longer cockpit than my old Looksha IV. Here are a couple of Looksha IVs in Maine last year. Mine is the beige Looksha IVs. It’s a 1996 build and it was bright yellow when new. The IVs has a little lower deck than the blue Looksha IV behind it. 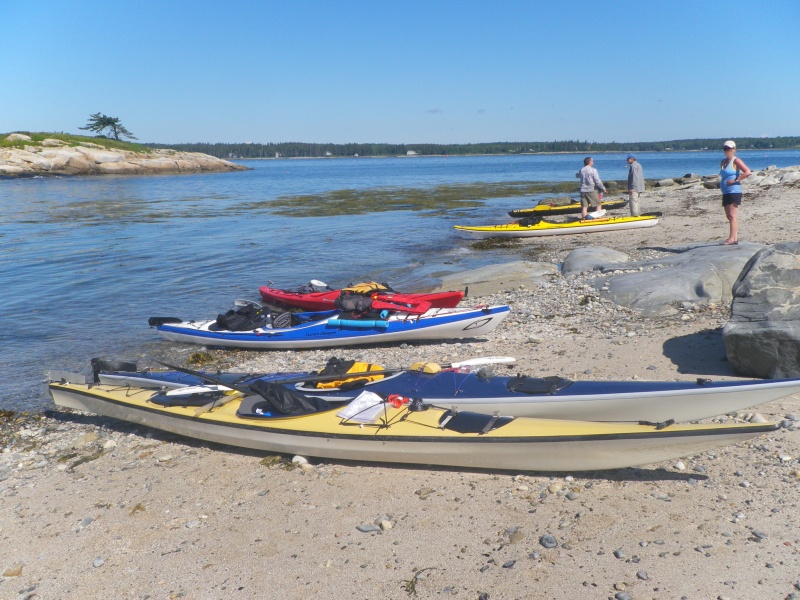 Since you are looking at this particular boat I would say to go for it. You seem to already understand what you want a kayak for and that is to paddle it.

Many who gravitate for those short and fat things just want to drift down a river. You would be bored with such a hobby within six months. I know because I did it. I started with a 13.5 ft Perception America. Sold it, cheap, six months later.

That Looksha 17 sounds exactly like my first kayak in 1995. Wish I still had it. Mine was no rudder/no skeg but weathercocking was not a huge issue thanks to the extended rear keel.

As others have written on here, you will probably feel a bit tippy in the beginning. However you will grow into your kayak quickly with butt in boat time (paddling experience). The Looksha multichine hull is very forgiving. Search out a friend to teach you how to do a self rescue or take a formal lesson before you venture further from shore than you are able to comfortably swim.

It may feel tippy for a complete beginner, but that feeling will go away within a few hours, at worst. Loose hips don’t sink ships. Actually 23.75" is rather wide, but 17’ long is not too long for a sea kayak. If rotomolded, the Looksha 17 is quite heavy. It will likely have the dreaded sliding foot pedals, but until you get into bracing and rolling that won’t matter. Such foot pedals can be replaced.

Many of the old timers here started on 17’ kayaks, as for sea kayaks, that was all that was available. Not sure if I fit as an old timer, but my first kayak was a Looksha IV (17’6" x24").

Now we have more day touring and recreational class boats, so there are more options. But a full on sea kayak would do just fine, if it meets your paddling needs.

You have paddling experience ? You inspired ? Go for the 17ft’r . I put my buddy with limited experience in my 18ft 23in beam wood boat and he did not feel comfortable to the point of getting all tightened up. He had paddled my FC Kahuna a few times no issue, but primary stability is a rock in that boat

Short plastic boats are all the rage. That does not mean they are the best boats for a beginner.
I have paddled a long fiberglass sea kayak in the San Juan Islands without that much experience. The people I brought along had even less. But they were outdoor people and they were fit. They could take instruction and plan ahead. We had few problems, but were careful to read the tide tables each day.

I built a wood Pygmy sea kayak that was 17’9" with a beam around 23 1/2 inches. It was my first kayak and was a good performer. I was out on Pyramid Lake in rough seas by the second year.

My first “real” kayak was/is a 17 1/2’ Current Designs Solstice GTS. A perfect beginner’s kayak. Easy to start off, lots more to do as I learn.

Your proposed kayak is in the same ballpark. Much better to start off on a real kayak, than on something that will limit you 2 weeks in and you’ll have to replace.

The only place you’ll struggle, initially, is getting it on/off your car rack.

Not too long. As long as you can handle the weight while lifting, carrying, loading and unloading, you should be fine.

I went from a 10’, 30” wide Perception Keowee to a 17’ long 23” wide Perception Sea Lion and had no problems on it’s maiden voyage after dark on a near moonless night in light rain with Chuck_IL.

Stability , except in barges, comes from the paddler in kayaks. The 23.5 inches isn’t really narrow in sea kayaks. They have some with 19". Look at paddling more and drifting less. You will have something to brace on with each stroke. “Air Braces” don’t work. That’s when you have the paddle out of the water. Keep the body loose and over the center of the boat.