Is anyone racking boats on a Transit Connect?

Where do you tie off boats to the Transit Connect’s front end? The front one foot of the car is all plastic. I guess There’s a steel bumper in there somewhere, but not easy to get a line around it and I’d have to thread through louvers that may open and close—never seen that.

I’m aware of the webbing strap from under the hood approach, but there’s nothing solid under the hood. Back by the hinge of the hood there are a couple of screws into metal. I could pin a webbing loop there, but would prefer to tie off closer to thr front end.

If anybody has an approach to tying off to the front of the Connect, I’d appreciate any tips you can share.

I know a paddler who drilled 2 holes in the hood of his vehicle near the front edge and installed stainless eye bolts to tie off to. His vehicle was not a Transit, but his solution may work for you

Pop the hood. Tie a bowline with some paracord around the hood hinges. Optionally, tie another one on the other end of the line. Have that stick out the hood when closed.

Super easy and cheap. Plus, I really like my bow lines going towards the back, not the front and this gives you that.

If you can get your hand in through any slots in the grill, you may be able to tie a strap or rope to the metal bracket that holds the hood latch mechanism. Then snake your strap/rope out through the grill. I’ve been able to do that on my last three cars.

I would go off the hood bumper screws and bring the straps out the corners just above the headlights.

A pair of these mounted to two fender bolts in the front corners.

Fold away when not needed. They work perfectly

Thanks for the suggestions.

I ordered some towing eyes. The Transit has little trap doors in the bumpers, on the right side only, into which you can screw a beefy towing eye, aka, recovery hooks. I’m glad to have them because if the Transit were to get stuck, they offer a point to attach a winch.

I looked at the hood latch as a possible place to attach ties. The hood latch mechanism is metal, but it is attached to plastic. I guess car makers have figured out how to make tough plastic, but I just don’t trust it as an attachment point. Here’s a photo of the hood latch. It’s steel, and is bolted to the plastic with steel bolts. There are few screws around the hood opening until you get back to the hinges. 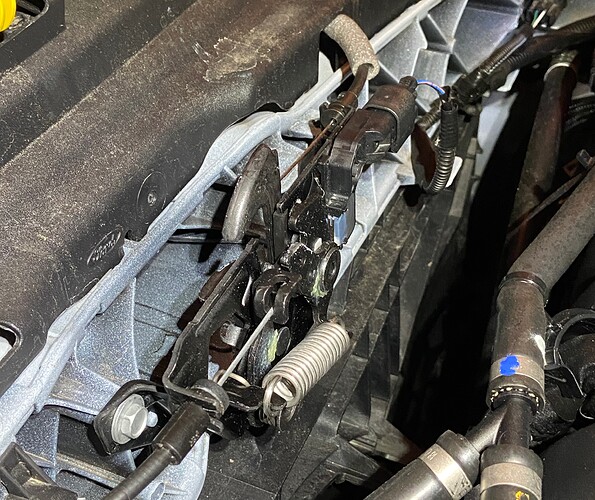 I ended up tying off to the hinges. Thanks for the suggestions of that. There are solid-looking bolts in the hinge area, they are covered in a thick layer of paint which I decided not to disturb. We’ll see how the tie-off to the hinge works before going there. 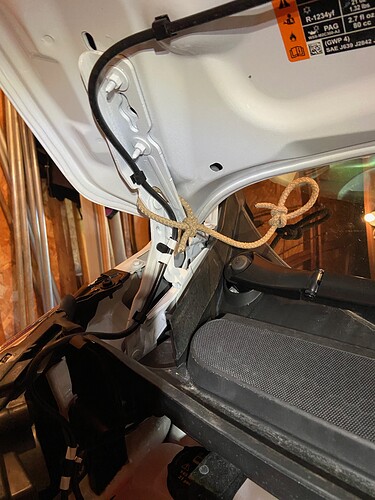 I also hung a loop around the rear bumper supports, a 3" square horizontal pillar between the bumper and the frame. 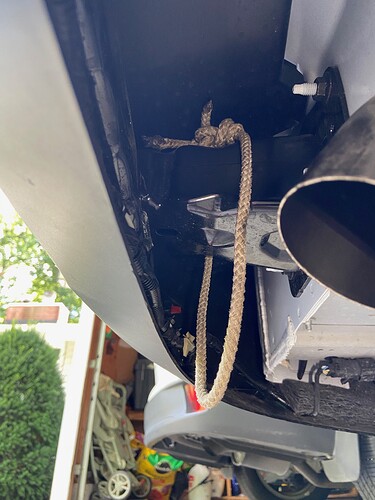 Best news yet, is that I went boating today! 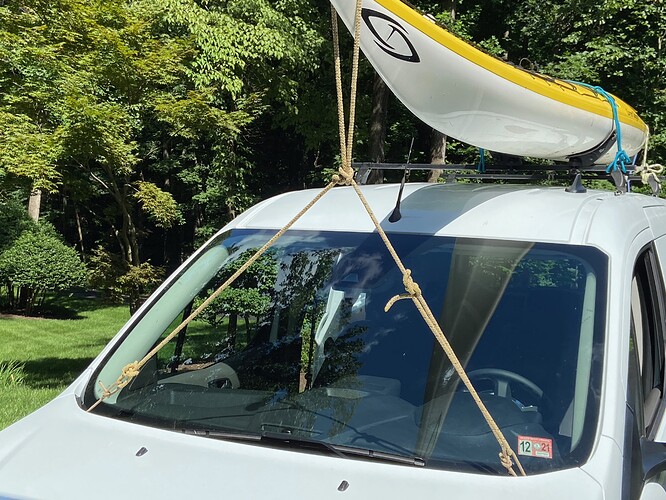 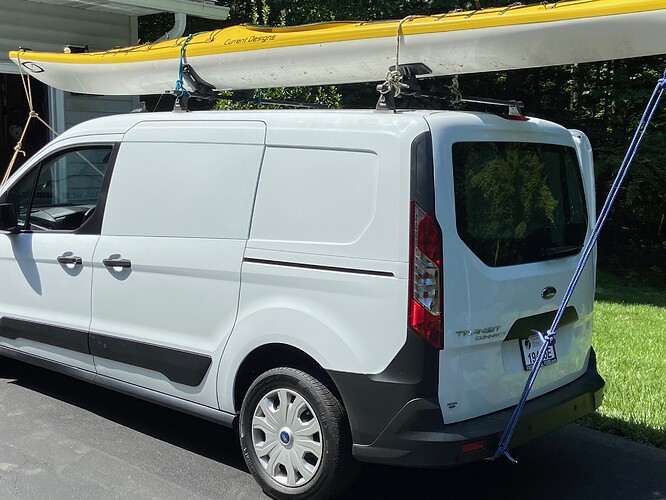 The Transit has little trap doors in the bumpers, on the right side only, into which you can screw a beefy towing eye, aka, recovery hooks. I’m glad to have them because if the Transit were to get stuck, they offer a point to attach a winch.

Nope, don’t use them for that purpose. We have a guy in our off road club that did exactly that. Those are not recovery points. The pull tore the plastic bumper and bent the metal behind it.

When you are stuck in a dirt road situation, you are usually only a tiny bit stuck. You can probably find something to help you out, strategically place rocks right where the tire is going can both give traction and lift. If you’re in deep mud, say up to the bottom of the body, well, you’re in trouble. Mud is very sticky, lifting the rig is often the best solution. Lift using a farm jack and then stack rocks. Note, a farm jack can be really dangerous to use and in my opinion the only safe place to lift is with the attachment that hooks to the wheel, that’s especially true on a Transit!

Not getting stuck is the best approach. 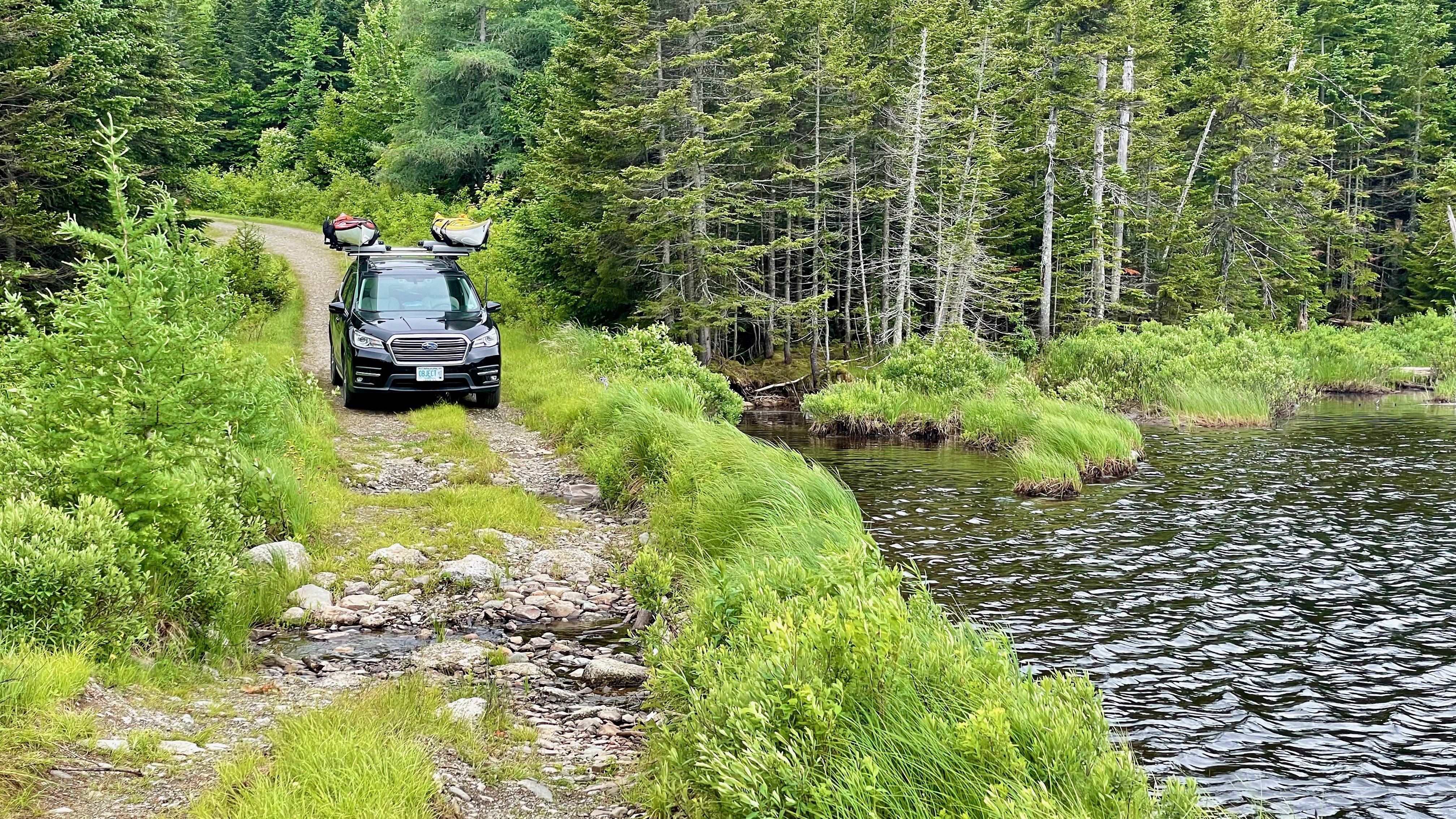 @Lillyflowers and I really wanted to continue here but it would have been foolhardy.

also, you may have some d-rings inside, in the back of the transit. You can use those and extend the cord out through the hatch. This way the rear tie downs won’t rub on the plastic bumper.

Look into the Rhino Rack Universal Side Loader, that will make the height easier to deal with. We used that before we got the Hullavators.

And is that rope? Oh man, cam straps are so much faster.

Digging the Transit, we seriously considered one, but the Ascent is just so comfortable!